This issue marks the beginning of a new column entitled Feed My Lambs, written by Mrs. Laurie Vanden Heuvel. Although the word “lambs” is commonly understood to mean little children, this column is for all ages because all believers are children of God.

The focus of this column will be on Christian nurture particularly in a home and an education setting. Sometimes it will deal with parents and children, sometimes with church education, sometimes with school eduction — elementary school, middle school, high school, college or graduate school.

Before instructing Peter to “Feed my lambs,” Jesus asked him a crucial question — “Do you love Me?” (John 21:15). That same question must purge the hearts and lives of all who would dare to be parents or teachers, knowing that they will be judged more strictly” (James 3:1). Love for God and love for His lambs is the foundation of Christian nurture. Join us as we explore the riches of God’s menu and method for “feeding” His lambs. 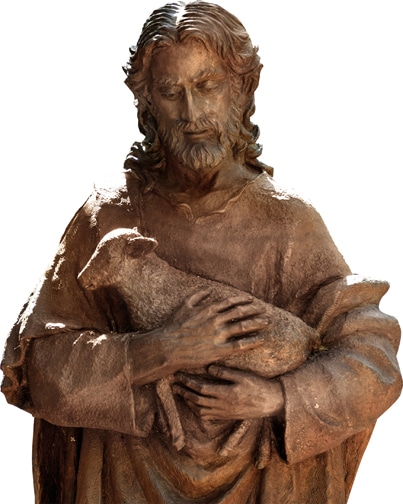 There was a time when grandpas and grandmas would point to the little red or white schoolhouses which dotted the countrysides of this great land and say, “That’s where I learned my three R’s.” By three R’s they meant reading, (w)riting and (a)rithmetic. These three processes were considered to be the essential equipment to get through life. They were what one might call the “meat and potatoes” of education. Important as those “three R’s” were and are in the educational smorgasbord of today’s curriculum, there are three R’s which are even more basic and express more precisely what God expected to accomplish through us as “image-bearers” when He gave us the cultural mandate to “subdue the earth and have dominion over it.” Those three R’s are: reflect, revere and respond.

To “reflect” is to think. It refers to both the process of thinking and the content of thought. The process of thinking is unique to man, not shared by animals, and therefore it is a demonstration of the “image of God” in man. The process of thinking must be developed in man from infancy to old age by such methods as questions and answers, making of comparisons, understanding of relationships, tabulation of similarities and differences and the like. All of these methods of developing thought presuppose the existence and assimilation of facts upon which the mind must act and react. The secular educator calls these facts brute facts. By this he means that there is a body of information belonging to mathematics, another body of information belonging to science, another to music, another to history, another to geography. This information is called the brute facts in each area of study. The secular educator maintains that these facts just “happened” and continue to happen without relationship to or generation from a source called God. The secular educator then proceeds to inculcate these brute facts into the thinking process of his students by various methods. But when he reaches the point in the educational process where he must attach values and significance and purpose to these facts, he is at a loss, operating in a vacuum. He has taught his pupils to think but he has neglected to give them the foundation for thought, the values attached to the thought and the purpose for thought. The student’s entire educational venture ends in despair, a despair which is sending thousands to mental institutions, drugs, destructive lifestyles and suicide.

In direct contrast to this, Psalm 36:9 says, “In Thy light we see light.” Colossians 2:3 says, “Christ in whom are hidden all the treasures of wisdom and knowledge.” Christian education begins by asserting that there are no brute facts which stand in isolation from God, but that on the contrary, all the facts of creation, whether they are mathematical, geographic, scientific, or historical not only find their origin in God, but also their development, continuation and final consummation in God — so that there is no fact, be it ever so small, which is divorced from His divine generation and control.

As a child grows under the tender influence of a Christian educator, he not only assimilates thousands of departmentalized facts, but he begins to attach spiritual and moral values to these facts. He begins to revere the Creator and created, and the importance of this reverence cannot be overemphasized. This reverence was completely missing in Adolph Hitler and the group of responsible educated men who surrounded him and carried out the ghastly atrocities of the Nazi regime against the Jews. These men enjoyed the music of Beethoven, Bach and Mozart. They admired the artistry of Rembrandt. But they were tragically twisted in their value judgments. Somehow in their spiritual educational backgrounds, the facts of art, music, science and all the rest had been imparted but they had been taught in a vacuum, totally devoid of the unification of intellect, feeling and action around a Christian perspective which yields an entire range of Christian value judgments and virtues.

But we must be honest and admit immediately that we face increasing crises in this land of ours. In the United States of America, responsible educated lawmakers have authorized the slaughter of thousands of unborn babies every day to cover the sins and please the whims of heartless parents. Responsible educated politicians in high offices have stunned the nation by their deceit and coverup. Millions of young educated Americans have exchanged the marriage bond for free love so that today virginity is a joke instead of a prize.

It does not take a theologian to discern that the leadership of this country rejects God: exalts man and pursues every avenue of communication and education, be it television, movies, stage, newspapers, magazines and most crucial—the public school classroom—to build a world of values and comforts to the glory of man. Unless we as Christians realize first of all, that those who dominate our entertainment industry, journalism, news media, liberal churches (of which there are legion) and public schools (where our entertainers, writers, news analysts, advertisers, scientists, liberal preachers, and teachers are trained) champion a view of God, of man, of created reality and goals for living which are totally antithetical to the revelation of God, we will never wave the banner for Christian education. There are far too many Christians even in the Reformed community who, in Thomistic fashion, think that we can share much of secular thinking and then sprinkle a little of God’s Word on top like we sprinkle sugar over cereal. They fail to understand that there is no common mind between the Christian and the pagan.

Christian schools have been founded on the conviction that covenant children must begin with the mind of Christ. They do not first exercise the mind of the world (the secular mind) and then add Christ on top of it. They begin by acknowledging that God is the Creator and Redeemer of the world, all the world natural sciences, psychology, moral choices, creativity, self-expression, government, history, mathematics, literature and all the rest. They begin by bowing before the demand that God be “all and in all.” These are their basic presuppositions and upon these their teachers build, training each child, “furnishing him unto every good work.”

Year by year Christian teachers open new vistas of knowledge of God and of His revelation in science, math, music, history, biology and all the rest. Year by year Christian teachers train them to evaluate everything they see and hear by the standards set down in God’s revelation, “teaching, rebuking, reproving, instructing” so that the child’s education is one of value judgments with the Scriptures operating as the norm.

To all of the Christian training with which the Lord surrounds His children, He calls for a response — a life of discipleship.

In history for example, the Christian young person has seen the historical process not as a long series of dates and events but rather as a scaffold surrounding a building called the kingdom of God — a scaffold which, when it is removed in the day of days, will reveal the perfect plan of God accomplished in human history. He has realized that through all of the events of history — the wars, the pioneer expeditions, the development of communication and transportation, the inventions, the reverses and advances of society, God is gathering a “bride” for Himself who will live with Him and for Him through all eternity. That Christian young person then looks at himself with whatever endowments God has given him and he seeks to utilize those abilities in a strategic way, contributing to the building of the kingdom of God.

The Christian young person, having mastered basic language skills, now seeks to use them to articulate his Christian convictions about life and God by writing and by speaking in his family, to his friends and associates, on a personal level and perhaps even a professional level.

Through science the Christian young person has come to understand and appreciate the creation around him, He does not abuse it but seeks to use it by developing its potential and using his discoveries to alleviate human suffering.

In math, the Christian young person has developed a profound respect for the design, order and unity of creation. He uses his skills in many ways to advance the kingdom.

In music too the Christian young person has responded to the beauty in the harmony of sounds and discovered that this gift of God can be used as a vehicle of praise and worship, and he uses it for that purpose.

We could go on developing the vast horizons which open up to the child of God through the process of Christian education. But these examples are sufficient to demonstrate the fact that Christian education is not only valuable, but indispensable for the development of our children as image bearers of God. Only Christian education can properly fulfill God’s plan for our families.

Mrs. Laurie Vanden Heuvel graduated from Calvin College and received her Master’s degree in education from Grand Valley State University in Grand Rapids, MI. She taught in CSI Christian schools full or part time for thirty years. Her husband Thomas, served in the ministry of the Christian Reformed church for thirty-five years and recently became a church planter for the Presbyterian Church in America (PCA) in Holland, MI. Rev. and Mrs. Vanden Heuvel have five children, all married and serving the Lord, and together they serve as Co-editors of The Outlook.