When the great composer Joseph Haydn wrote the music of his immortal “Creation,” he may have been sitting on a grassy hillside in June, as the sun descended in all its glory behind a delicate curtain of iridescent clouds whose beauty spoke clearly of the words in Psalm 19, “The heavens declare the glory of God and the firmament showeth his handiwork.” Or he may have waited until the countless stars of a clear, summer night appeared, each one singing the praises of its Creator. For Haydn had eyes to see these things, and ears to hear. 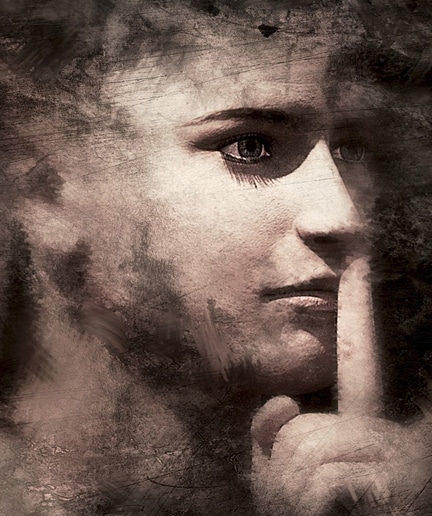 A wise writer once truly said, “The eyes of a poet see the grandeur that escapes the man who hurries by; and the ears of a composer hear melodies hidden in the turmoil of life.”

The Bible has much to say about seeing eyes and hearing ears. Isaiah, with his long-range vision, declared, “For since the beginning of the world men have not heard, nor perceived by the ear, neither hath the eye seen, O God, beside thee, what he hath prepared for him that waiteth for him.” And the great apostle Paul said, “Eve hath not seen, nor ear heard, neither have entered into the heart of man, the things which God hath prepared for them that love him.”

It would seem, then, that men cannot see properly, nor hear keenly enough the things that are revealed by God, until their eyes and ears have been especially opened.

Scripture describes many kinds of eyes and ears, some of which are good and some evil.

First, we have the eyes and ears that see only the material things of life. One has but to stand on a busy street corner to watch the passers-by, knowing from their very attitude they are in pursuit of material things. One by one they accumulate the desires of their material eyes, be it beautiful clothes or the many colorful things that are offered in the shops. Of such the Scriptures declare, “The eye is not satisfied with seeing, nor the ear filled with hearing.” Because we are upon the earth, we need clothing, shelter, and perhaps even some aesthetic surroundings and cultural stimuli, but if our eyes are not lifted above and beyond these earthly possessions, we know from the Word of God that our eyes will never be satisfied and our wealth will eventually pass away.

There is another eye which sees a bit farther than material wealth. The Psalmist describes such eyes in the eighth Psalm, where God’s glory is expressed in glowing pictures of nature. The beauty of the heavens, the moon and stars, the wonder of man, the marvel of instinct in animals, and the ways of birds all receive adoring attention through eyes which have learned to see “the grandeur which escapes the man who hurries by.” Such eyes are never weary of beholding white-crowned mountains and green-clad valleys; lace-capped waves and mirrored pools; fruit-laden trees and sequined rose petals; a mother’s bright smile and a baby’s sweet ways. How few people see what Blackmore speaks of when he describes his awe in passing through a wooded glen where “hung the green arcade of ferns, some with countless ear-drops jerking; others cupped and fanning over with the grace of yielding, even as a fountain spread by winds that have lost their way, stooping, glancing, weaving softest pillow-lace, coying to the wind and water, where their fleeting image danced. God has scarce made a lovelier thing -and only he takes heed…of them.” Language such as this comes from a heart that has seeing eyes and hearing ears. The ears of such a one can also rejoice at the melodies he hears, which to many are hidden in the turmoil of life.” He hears songs of praise in the matin of a robin; a hallelujah in the crash of waves upon a rocky shore; a note of adoration in the tiny raindrops upon the eaves; a triumphal chorus in the wind as it whistles through tree-tops.

To those who are blest with such eyes and ears, life takes on a richer, fuller meaning.

A third eye and ear may be summed up in the words of Paul to Timothy, “after their own lusts shall heap to themselves teachers having itching ears.” Such ears are ever on the alert for something new, for they have never loved that which God has given for their good. Cheap stories are read instead of the blessed Word of God; the gossipy gathering is preferred, where the faults of others are discussed; the T.V. Western show is chosen above the cultural and spiritual activities in the church. Itching cars are ever eager to listen to that which cannot satisfy the hunger of the soul; always seeking, yet never finding satisfaction.

Thank God there are eyes that have been opened to see, and ears that are tuned to hear that which God reveals to them. Job experienced such eyes when, after he had been afflicted, he cried out, “I have heard of thee by the hearing of the ear; but now mine eye seeth thee.” And when that opening of the eyes and ears of Job took place, all was changed. Job’s eyes saw God in all of his visual experiences, from the stars above to the very stones at his feet, which to him became the place of sapphires and the path of glory.

The Psalmist of old realized that such eyes and ears were a special gift from God, for he sang out, “Praise the Lord…the Lord openeth the eyes of the blind.”

What did Job, and the Psalmist, and with them all of God’s children see when their eyes were opened? Psalm 119 verse 18 reveals part of the answer to that question, for it states, “Open thou mine eyes, that 1 may behold wondrous things out of thy law.” A child of God knows some of these wondrous things; for example, he knows that Christ has redeemed him with his own precious blood; that by faith he may claim all the rich blessings of God; that there is laid up for him a place in heaven; that his inheritance goes beyond anything earth has to offer. The wonder is, that those who hunger for these things and who humbly ask for them at the throne of grace may have them abundantly, for God Himself says, “Open thy mouth wide and I will fill it.” This promise applies to the eyes and the ears as well.

When Paul states that “eye hath not seen nor ear heard, neither have entered into the heart of man, the things which God hath prepared for them that love him,” he hastens to add, “But God hath revealed them: unto us by his Spirit.” God’s children add a fervent “Amen” to that statement, for the eyes of faith see and experience these wondrous things of God in ever-increasing measure.

At times the visions of the spiritual eye are dim, causing the Christian to pray, “I ask no dream, no prophet-ecstasies,

No sudden rending of the veil of clay,

No angel-visitant, no opening skies;

But take the dimness of my soul away.”

When this petition is answered, the vision is renewed, and glory pours in. Then he experiences anew the truth of this short, but rich little gem:

“Fix your eyes upon Jesus;

Look full in His wonderful face,

And the things of earth will grow

In the light of His glory and grace.”

While we behold him and experience unspeakable joy, we are still living in this world where “change and decay in all around we see”; but, thank God, we are promised a home in glory where there will be no decay and where all is perfection. The bright hope of every believer in Christ is expressed beautifully by the Psalmist where he pours out his faith in these immortal words, “As for me, I will behold thy face in righteousness; I shall be satisfied when I awake with thy likeness.”

God grant us all eyes that shall awake to that majestic and eternally soul-satisfying vision which beholds the King in all his beauty surrounded by glory so great that Paul, speaking of it, says he “heard things that cannot be told, which man may not utter.”

Open my eyes, that I may see

Glimpses of truth Thou hast for me;

Place in my hands the wonderful key

That shall unclasp, and set me free.

Open my ears, that I may hear

Voices of truth Thou sendest clear;

And while the wave-notes fall on my ear,

Everything false will disappear.

Silently now I wait for Thee,

Ready, my God, Thy will to see;

Open my ears, illumine me,