The movie Evita opened in theaters in Argentina in February. Several theaters were attacked and a variety of protests were mounted. The critics of the movie were not objecting to the moral life of Madonna, the movie’s star, or to the artistic quality of the film and its music. They were protesting the movie’s some-what negative portrayal of Eva Peron.

Eva Peron was the wife of Argentine president and dictator, Juan Peron. She was first lady just six years, until her death in 1952 at the age of 33. Over forty years later she still inspires the passions of many in Argentina. She also inspired a successful American composer to write a musical about her, a musical that was a hit both on the stage and as a movie. What about Evita evokes such passion long after her death? And, more importantly, what does our interest in Evita tell us about our culture and ourselves? 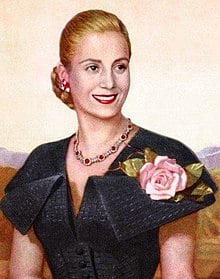 Eva Peron was born in 1919, illegitimate and poor. In every way she grew up far from power and from the cultural life of Buenos Aires. She moved to the capital and used her meager talents and several alliances with influential men to develop a modest career in acting. Then she met Juan Peron, a powerful figure in the Argentine military and government, and became his mistress in 1944.

Evita soon became an important figure in the Peronist movement. She became a fiery and effective orator, captivating sometimes more than a million listeners as she spoke from the balcony of the palace called the Casa Rosada. She became a symbol of success and hope as she dressed in the elegance of Christian Dior, covered herself with jewels and bleached her hair to a golden tone. She came to have great influence on Juan Peron signaled by their marriage in 1945, to which all his advisers objected.

Yet there was more to Evita. She was not just another wife or another speaker for a fascist dictator. She used her power to help the poor. In 1949 she officially inaugurated her Foundation for the needy. Often she was in her office for seventeen hours a day meeting with poor people and granting their requests. In the first half of 1951 she “gave away twenty-five thousand houses and almost three million packages containing medicine, furniture, clothing, bicycles and toys.” She loved to give sewing machines (reminiscent of her mother who kept the family fed by sewing when Evita was young) and dentures (to enhance the dignity of the poor). She always gave more than was asked saying that she wanted to create dissatisfaction among the poor so that they would strive to escape their plight.

Evita’s economics may not have been good and the Peronists may have harmed the Argentine economy in a variety of ways, but her desire to help the poor was genuine. Something of that spirit is captured in the musical when Evita sings, “Don’t cry for me Argentina for I am ordinary, unimportant and undeserving of such attention—unless we all are. I think we all are.”

Her concern for the poor led many of them to call her Santa Evita, St. Evita. Many to this day have pictures of her in their homes next to a picture of the Virgin Mary. In the two years after her death, the Vatican received around 40,000 letters from Argentines claiming that they had experienced miracles through the intercession of Evita and asking the pope to declare her a saint.2 Was Evita saint or monster? Was she the mother of the poor or ruthless politician? She was probably something of each. In that way she exemplifies something of the mystery of fallen humanity -motivated and acting in ways that are an unfathomable combination of factors.

Still we may ask if the Evita of history as well as the Evita of the musical can tell us anything about the culture in which we live. Evita, I fear, stands as an icon of the quick fix to which our culture is so devoted — if there is a problem, there must be a way to solve it immediately. In politics the quick fix may be revolution or a constitutional amendment to balance the budget. In economicsit maybe gifts to the poor or going on the gold standard. In education it may be giving teachers tests or lowering class size. In medicine it may be millions for AIDS research or requiring photo ID’s for teen smokers. Now some of these ideas may be good, but they may also reflect an outlook on life that says problems are simple and can be simply and quickly solved. In fact, however, many problems are very complex and can be effected, if at all, only by long and difficult solutions.

Those looking for the quick fix often seek a leader who promises it. Evita was such a leader — speaking powerfully and helping the poor. But if she had lived more than her six years as first lady would her efforts have been revealed as surface, not really helping in a deep, long-lasting way?

Political life in America seems diseased with the idea of the quick fix. Problems with Social Security, Medicare and budget deficits get sound-bite solutions from politicians running for office. But the politicians speak this way because the electorate does not want to hear about the real extent of the difficulties or to make hard decisions to move toward improvement.

For those devoted to the quick fix the demand is meaning through emotion. Life becomes theater and catharsis is salvation. To gather on the Plaza de Mayo with Evita and a million others brings meaning to life. To feel the wild enthusiasm of the impassioned speaker and the crowds response, to laugh and cry there, gives hope and meaning. Or does it really?

The quick fix of emotion seems to dominate our society from the plague of drugs to the “benign” joy of sports for endless hours. Sports are theater where nothing really important happens, but emotions are stimulated.

The life of the church has also been greatly affected by the notion of the quick fix. Church services more and more share the character of the theater. The leader is responsible not just to lead worship, but to direct emotions. From holy laughter to sentimental tears worship becomes the catharsis of comedy or tragedy. The service itself and its emotions become the meaning of the church and one is left wondering, “Where is God?” Some believe that they feel the powerful presence of God in the excitement of the church/theater, but is that the living God of holiness and order or just self-induced enthusiasm?

Such worship — increasingly undisciplined and emotional — has the effect of undermining the disciplines of the Christian life generally. A careful study of the Bible and the catechism seems dull compared to a class on self-esteem. The disciplines of prayer and devotion seem flat compared to singing choruses. The life-long struggle against sin and toward holiness is not as exciting as meetings in a stadium. Yet life has many problems and responsibilities that require steadiness, constancy and commitment. The church will not really help people in either the short-term or the long-term if it reinforces the idea that transient emotions and a quick fix are the Christian way. Living with disappointment, temptation, sickness and all the vagaries of life requires strength that does not come from oft-stimulated emotions, but from the Biblical disciplines of the Christian life.

Evita may have been for the poor a briefly encouraging cornet in the Argentine heavens and Evita the musical may provide a theatrical catharsis for its audience. But the profound solutions to the problems of a culture must be sought elsewhere. The failure of Evita is captured in the words of the musical: “But who is this Santa Evita?..She had her moments; she had some style…You let down your people, Evita. You were supposed to have been immortal—that’s all they wanted—but in the end you could not deliver.” Only Jesus Christ is immortal and only the truth and disciplines of His church give real hope and help to us and to the generations to come.