“When I saw among the spoils a goodly Babylonian garment, and two hundred shekels of silver, and a wedge of gold of fifty shekels weight, I coveted them, and took them; and, behold, they are hidden in the earth in the midst of my tent, and the silver under it.” (Joshua 7:21)

Achan was one of Israel’s soldiers in the battle of Jericho. He was on the right side of the conflict but on the wrong side of the wall. God had given the command that the entire city of Jericho was to be destroyed. Anything that was taken out of the city, be it gold, silver, bronze, or iron, was to be taken to the treasury of the Lord as the first-fruits of the conquest. Everything else was to be consumed by fire.

Achan had heard the command along with everyone else, but when he entered the city and actually saw some of the forbidden spoil, he coveted and took some of it. The very fact that Achan hid what he had taken shows that he knew what he was doing was wrong. Because of this willful sin against the direct command of God, the judgment of God came upon the entire nation in the defeat at Ai.

Achan’s disobedience came because he was unhappy with the Lord’s leading in his life. Isn’t that amazing? Here was this Israelite who had been wandering thru the desert for forty years. During that time he ate the manna and the quails. He drank the water from the rock. During that time, neither his clothes nor his shoes wore out— not for him nor his family. Can you imagine never having to buy clothes for your children because God saw to it that their clothes never wore out no matter how hard they played?

Just a few days earlier, they had crossed the Jordan on dry ground. How much closer could you get to the fulfillment of the promise! And yet, here was a man who looked at all that God had done and saw them not as blessings, but as curses. Always manna! Always the same clothes! Never so much as a dime to spend or save up for the future. Then he walked into the city of Jericho where his dissatisfaction gave birth to disobedience.

Isn’t that usually the case? When Satan sinned by rebelling against God it was dissatisfaction with the position that God had given to him. God was the Creator; Satan was the creature. But Satan was dissatisfied with that position and wanted to be like God. It was the same in the case of Adam and Eve when sin first entered the human race. God made Adam and Eve perfect in all respects. But Satan called attention to the fact that Eve and her husband were not like God, knowing good and evil. He told them all they had to do become like God was eat from the forbidden tree. Satan had sown the seed of dissatisfaction in the hearts of our first parents and they ate from the tree.

Not only was Achan dissatisfied, but once he entered into the city of Jericho he coveted that which was not his. Can you imagine the sight of a beautiful garment after wearing the same thing for almost forty years? When Achan saw that shiny mantle from Shinar, he saw a chance to be like the world with all its visible success and fashion. The internal dissatisfaction and covetousness of Achan led to sinful actions. He stole that which he could not have.

Achan’s fall is too often our own. Materialism and worldliness are our society’s greatest temptations and most apparent sins. Dissatisfaction with what the Lord has provided leads to a desire for that which God has not yet given or that which He has given to someone else. Nothing will destroy your life quicker than dissatisfaction with God’s arrangement for you in your life.

All to often we are not satisfied because someone has more than we do. They have nicer things than we have; they are able to do more than we are; and so on. Such dissatisfaction leads us into sin. Paul wrote, “I know how to get along with humble means, and I know also how to live in prosperity; in any and every circumstance I have learned the secret of being filled and going hungry, both in having abundance and in suffering need” (Philippians 4:12). Paul’s secret was not to look at the things of the world but to always strive for Christ’s glory rather than his own.

Jehovah explained to Joshua that the loss at Ai was a direct result of sin in the camp of Israel. At God’s command, lots were drawn by the leader of each tribe. Eleven tribes were eliminated. One from each clan within that twelfth tribe came forward and selected a lot. Again, the majority of clans were eliminated. Then the head of each family came forward and finally one person was left standing with the lot pointing directly at him–Achan.

We do not know what was going on in Achan’s mind as those lots were being cast—every time eliminating another group of people—every time drawing closer and closer to him. We do know, however, that Achan did not fall on his knees in repentance. He did not have the brains to escape nor the grace to confess. His heart has been hardened by his own dissatisfaction and deceitfulness and it proved to be his own destruction.

Once his sin was exposed, Achan confessed using words very similar to those found in Genesis 3: “I saw; I coveted; I took.” And then what? “I hid.” Just like Adam and Eve hide themselves in the very place where God had put them—the Garden of Eden—so Achan takes the forbidden items and hides them in the very ground that was God’s promised land to Israel.

Then came what may well be the most chilling words of the account. Not the punishment itself, but in verse 23 we are told that the stolen objects were displayed before the people. They all knew the ban. They all knew the defeat at Ai came upon them because the ban had been violated. They knew the thirty-six men that had died in battle because of this one man. It was all because Achan was not satisfied with his position in life. He could not wait to possess the land. He wanted it now! So he stole some of it now. 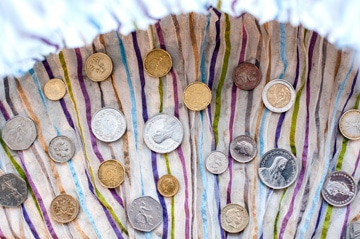 Even more frightening point is made in this verse. The stolen booty was spread out before the Lord. They were spread out before the eyes of the holy God, as all sin one day will be exposed for what it really is. Can you imagine the anger of the living God upon this man and his sin? Here God was in the process of giving them everything: a land flowing with milk and honey, houses they did not build, vineyards they did not plant, livestock they had not raised, and more. It was all going to be theirs. But the first-fruits were to be kept for the treasury of the Lord in the temple.

Achan was not stealing from Jericho; he was stealing from God. He wanted the benefits of the eschaton before the eschaton. It would be like God giving to us every blessing that is ours as Christians: forgiveness of sins and eternal life. Then He adds to that, the beautiful home you live in, the car that you drive, the food you have in the oven and in the cupboard, your health, your job, every good gift that you have. It all comes from the hand of God. And all God asks in return is the first-fruits. “Return to me a tithe.”

And you don’t. You are not stealing from whoever it is that holds your mortgage, or some bill collector, or your boss, or anyone else. You are stealing from God that which He has declared is rightly His. That is what Achan did. If we are to learn anything at all from the defeat at Ai and the sin of Achan it is that God does not and will not tolerate sin.

Even though this is an account of judgment, it is also a proclamation of hope. The blessing will come again when sin is repudiated. Once the sin has been dealt with, God gives the orders to go up to Ai and capture it, and Israel does so without a hitch.

Jehovah’s anger did not cool until judgment was duly meted out against the one who transgressed the covenant of God. Once that punishment was meted out, Israel could receive the blessings God had promised. They could continue conquering the Land God had promised them.

Achan, his family, and all his possessions were destroyed in the Valley of Achor. Since that day, the site became known as the Valley of Disaster. It was a place of fear; a pile of stones reminding the people of the intense punishment of God upon those who disobey Him. Jesus, the Messiah, went down into that dark valley and made it a resting place for all who seek Him. He turned earth’s most dismal valley into a point of uplifting hope by taking Achor‘s disaster—our sin— upon Himself. By His blood He would set in place the unconditional covenant in which the Lord declares: “I will forgive their wickedness and remember their sins no more.”

After the punishment of Achan, “the Lord turned from the fierceness of His anger” (:26). This points to the propitiation and expiation of God’s anger against the sin of humanity by the execution of the sinless Christ, who was made sin for us that we might become the righteousness of God. Jesus Christ was numbered among the transgressors and died as if all the sins of all His chosen people had been committed by Him.

And in that He makes us free to enter into the Promised Land.