The title of this article is suggested by II John, verse 1, “The elder unto the elect lady and her children, whom I love in truth; and not I only, but also all they that know the truth.”

Bible scholars are not agreed as to whether these words were directed to a certain lady, or whether John uses this expression figurativeIy to deSignate a particular Christian church. Perhaps the preferable view is that he is writing to an actual individual, probably a Christian widow living with her grown-up children. When he says that she was loved by “all they that know the truth,” he makes it plain that she was pretty well-known, and that she was a person of real excellence. From the closing verse of the letter we gather that her nephews and nieces held her in esteem.

There were a number of such good women in the early church: Dorcas, Lydia, Phoebe, and Priscilla. It is perhaps worthy, in passing, to note that the apostle in whose home the mother of our Lord spent the solemn evening of her life here addresses an affectionate salutation to a Christian mother and her family. and that this salutation, together with the unusual letter that follows, has been given a place in the sacred Canon. 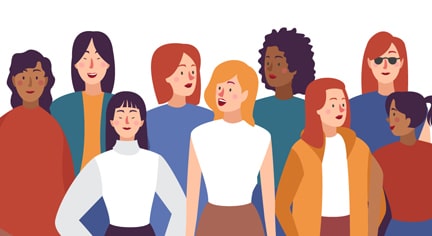 There are at least three elements of a Christian woman’s character that come to mind in reading this letter. The first is that she has her share in the serious business of life. An “elect lady,” no less than an “elect” man, has her solemn responsibilities. Of course, this is true of all women and of all men, but Christian people are under special constraint to realize it, and that by virtue of the fact that they are Christians. A woman’s share in the world is vastly more than on its ornamental side. She came into being after the man was created, but that does not mean she was an afterthought. This needs to be stressed in the presence of those men who continue to speak of a woman in a tone of patronizing humor. So if there be tasks in the community for which her native endowments in mind and heart specially qualify her, let her not be hindered by prejudice from doing her best to fulfill them. That there are problems and situations in society which women are qualified to meet is perfectly obvious to us all. A woman does not always have to occupy a conspicuous place in public life to fulfill those responsibilities. But whether conspicuous or unnoticed, she has her important place.

With some critical minds, unfortunately, the idea lingers on that a Christian woman must more or less segregate herself to maintain her piety. If she becomes prominent in public relations, she is regarded with suspicion. If she assumes a generous share of community responsibility, she is suspected of being too broadminded. This is particularly true of married women, who by the super-critical are committed to their homes, their housework, and the rearing of their children. Of course, a married woman’s first responsibility does lie there, and certainly a mother must give prior consideration to her home and family. Yet, the above-mentioned attitude is most unfortunate in our country where the American way of Me is democratic and where all people are expected to share community responsibilities. We need women in our schools, our nursing and medical profession, our social service and welfare agencies. Some of this work can best be done by married women. The more Christian women can be engaged for these essential tasks the better. Let no one say that a Christian woman necessarily damages her piety when she assumes such public positions of trust and confidence.

A second element of character that should be mentioned in this discussion of eject ladies is kindness. If there be special duties to which a woman is called in the human family, one of them certainly is that she be the representative of kindness. Society is in a poor plight when women cease to stand for the gentle virtues. As a fact of ancient history, no surer sign was given of the coming fall of Rome than when her women became as wanton as her men in their desire to see the gladiators fight to the death. It reminds us of our present-day prizefight matches witnessed by men and their sportive spouses, the women no less than the men screaming with excitement while the fighters in the ring attempt to batter each other into bloody insensibility. Surely God’s elect ladies must never cease witnessing against those inhumanities and barbarisms that so often in the past presaged the fall of a civilization.

A third element in womanly character that comes to mind during the reading of the apostle’s letter is what I shall call, for want of a better term, the Puritan strain. John cautions the elect lady against dealings with “deceivers.” He expressly commands her not to receive into her house a false teacher. “Give him no greeting,” he says. Have nothing to do with his “evil works” (vs. 7, 10, 11). We are reminded here of a saying of Cardinal Newman, “A woman’s security against evil is being shocked at it.” Men can learn from that tool If we Americans are interested in a revival of Christian morality in our land—and who will dispute the need of it -we perhaps had better begin by summoning the women of America back to that holy sternness which gives no countenance to lax ways and to the flagrant and reprehensible indiscreetness of our day. I think it is a shame how many Christian women there are who slavishly imitate the world in its fashions, its search for glamor, its craze for physical attractiveness, its passionate preoccupation with the body.

To mention one thing in particular, it were better for us, our homes, our children, and our churches, if we were more modest in our wearing apparel. Surely a Christian woman in this modern sex-preoccupied world should be distinctive in the way she clothes herself. A simple rule for us married women to remember and to commend to our daughters is that a woman’s dress should fit well enough to show she is a woman and loose enough to show she is a lady.

The generation of our grandparents had its foibles, its failings, and certainly its sins. But it also had those unforgettable good qualities which in no small part can be traced to the stern respectability of its women. That was the salt of the time.

Alas, it is not so today. As one studies the undercurrents in modern society—and for that matter the surface currents too—that continue to move toward a less and still less restrained life and morality, one shudders at the thought of what may lie ahead for America. Somewhere in the growing laxity of talk, of convention and morality there must be a point where Christian women of all churches and denominations can consolidate their holy indignation and speak out with united voice, and move out in united action, against the devilish enemies of decency, of sobriety, and of truth.

The level of any civilization is the level of its womanhood. Think of what Christian women in prayerful confederation could do with that fact!