More than that, every church should welcome to its membership all who accept the gospel message and are willing to be instructed in the fundamentals of that gospel; who are ready to indicate their agreement with its teachings and to submit to its discipline.

WHAT IS A COMMUNITY CHURCH?

A community church, in the sense in which that term is generally understood today, is quite a different organization from the one just described. It denotes a church which has no particular denominational affiliation and no definite creed, and which is ready to receive as members all who claim to be Christians and who are ready in some formal way to signify their desire for affiliation and to actually become members.

We should add that the term “community church” sometimes has a wider connotation. There are churches which call themselves by that name even though they do have denominational affiliation and a specific creed but which at the same time make the terms of membership so general that all who hold to some form of the evangelical faith, whether Reformed, Lutheran, Methodist, or Baptist, are permitted to join.

Such community churches are numerous especially in new neighborhoods, particularly where no Single denomination is represented by more than a very few individuals or families.

It stands to reason that this type of organization, especially in new and fluid communities, has decided practical advantages over strictly denominational organizations. Yet there are very serious objections to the community church idea.

First of all, there is a doctrinal objection. The Church of Jesus Christ is not a service club, or merely an organization to satisfy the “religious aspirations” of people. According to I Timothy 3:15, the Church of the living God is “the pillar and ground of the truth.” Its mission is to preach the truth, teach and expound it, confess it, and defend it against all error. And by the “truth” of which Paul here speaks is meant all the truth as revealed in the Bible. The fellowship of the members of the church is one of love but such a love as is rooted in a common loyalty to Him who is the truth and the life.

It follows that the Church must require of its members a confession of adherence to the truth and at the same time recognize its calling to build up those members in the knowledge and love of the truth. If it fails to let the light of the gospel shine in all its clarity, if its trumpet gives forth an uncertain sound, it cannot satisfy the spiritual hunger of its members, nor will it be an effective agency for the conversion of sinners.

The typical community church, with its diluted gospel and its half-baked messages, can never meet the spiritual needs of its members. For such a church will fail to present the great themes of the gospel, the basic tenets of the Christian faith, for fear that this will provoke disagreement and contention within its own bosom. For that reason it is bound to disappoint its best members who want it to strike a spiritual note and to bring a rich as well as distinctive message.

SHOULD WE HAVE SUCH CHURCHES?

Even if we should want such churches we should not have them because they are bound to be a detriment to their own members and to the denomination of which they are a part. The Christian Reformed Church is showing commendable zeal to make each one of its churches a center of evangelistic activity. Much emphasis has been placed on this task in our Centennial celebrations and reflections. This passion for evangelistic activity on the local level is not something new among us. The movement had its beginning more than fifty years ago. For many years our most progressive city churches have stressed neighborhood evangelism. Much of this work has been done for several decades past in such centers as Grand Rapids, Holland, Chicago. Paterson, and others. However, at the present time there is indeed a praiseworthy endeavor in many of our smaller congregations to undertake such work in rural as well as urban communities, while some of our newer congregations, for example Comstock Park, Michigan, Lakewood, California, and Philadelphia. Pennsylvania, spend much time in working among the unchurched in their vicinity. 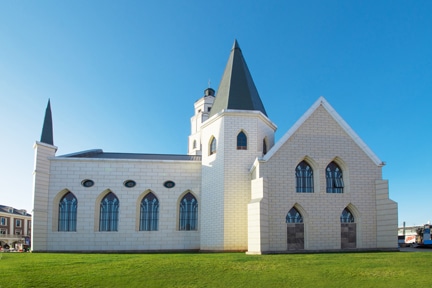 We must not fail to face the fact that this worthy program of neighborhood evangelism exposes us to the danger of establishing anemic community churches. If our leaders give ear to the plea of some to lower the bars of membership for mission converts by requiring no expression of agreement with our Reformed faith which is nothing but the Christian faith in its purest and clearest expression—but demanding onJy that they confess their faith in Jesus Christ as Savior and Lord, it will not be long before we have a number of community churches which are Christian Reformed only in name.

Such an approach to evangelism is bad for more than one reason. It is bad because it substitutes worldly standards of success for those of Scripture, as if, to quote Marcus Bach (Christian Century, January 8, 1958), “God’s work is finally being judged by…the rhythmic chant of I.B.M. machines.” Converts must be taught the doctrines of salvation, and these doctrines are Reformed doctrines. Reformed doctrine is Bible doctrine.

Second, such an approach to evangelism as characterized above is bad because it ignores the law of discipleship; “deny yourself, take up your cross and follow me”—which includes forsaking the world, the lodge included. It is bad because it puts more stock in “bigness” and “numbers” than in knowledge of the Word, spirituality, and perseverance in the faith.

This same approach to evangelism is bad for the convert, for the community church which he joins, and for the denomination.

It is bad for the convert because he receives little or no instruction in the great doctrines of the Bible which are needed to impart stability to his faith.

It is bad for the community church because true spiritual unity is lacking where Baptists and Pedo-Baptists, Lutherans, and Reformed fellowship together, or where there is little or no knowledge of the great truths of the gospel.

This approach to evangelism is bad also for the denomination as a whole. If the community church idea once finds entrance it will spread and the result will be that in the end we shall lose our creedal distinctiveness. For we cannot consistently require of our own children to receive instruction in and subscribe to our Reformed doctrines if we do not require this of mission converts. No church can successfully maintain a double standard of admission to membership. Such a dualism cannot last. The community church idea, once accepted, will permeate our Church like a leaven, though the process be very slow, and in the end reduce us to the colorless level of many denominations today.