Recently I talked about the problem of a complaining, grumbling mouth that actually issues from a rebellious heart whether we realize it or not. Nobody likes to be around someone who regularly complains.

Some of you are married to a person like that and you know what a pain it is, but what about you? Give yourself a test. Just take one day and consciously count how often you find yourself grumbling about something even if under your breath. You might be shocked.

Most of us have a problem in this area that we need to recognize and then realize that it’s a serious problem as evidenced in the life of the wilderness wanderings of the Jews. They discovered that when they complained they did so against God and actually sinned against the Lord. They also found out that complainers don’t enter the Promised Land — the physical one or the spiritual one. Let me show you what I mean.

Israel would complain and God would say, “Take me a lap around the desert.” They would get the point for about a day and a half — and then start grumbling about something else, and God would say to them, “Take another lap because you’re going to keep walking until you learn this lesson.”

Well, they finally griped so much that the Lord said, “OK, just die in the wilderness. Suffocate in your unbelief and rebellion,” and they did. A whole generation dropped in the sands of the Sinai. 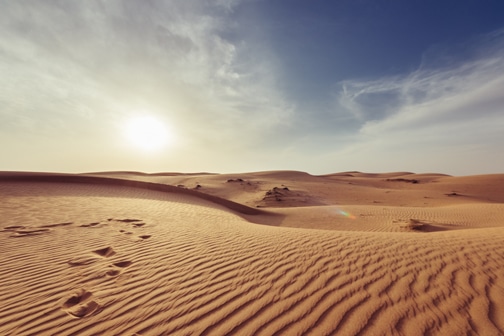 That was bad enough, but did you know that complainers don’t enter the heavenly Promised Land either? Paul alludes to that fact in Philippians 2:16 where he speaks of the possibility of his laboring “in vain” among the Philippian believers. He acknowledges that God might say to some of the apostle’s converts, “Just die in the wilderness.”

Now some of you may be thinking, “Wait, I thought we enter heaven by faith alone in Christ alone?” Well, if you think that you’d be right. Then you might say to yourself, “But if that’s the case then complaining can’t keep us out of heaven — only unbelief!” And you would be right again. So, here’s the kicker — God says in the Bible that the root of a complaining, griping spirit is an unbelieving heart.

You see, our lips reveal our hearts. We either trust our Father in heaven and express thankfulness or we rebel against Him and complain.

The very morning that I preached the first of two messages on this topic I stepped into the pulpit area a few minutes before the beginning of the first service in order to hook myself up to the lapel microphone. As I was trying to put it on I noticed that someone had reversed the clip. It was a hassle to change it back to the right, so I’m standing there grumbling under my breath, and our associate pastor walks up overhearing my complaining. I looked at him and started to laugh (maybe I should have cried), and said, “Do you realize what I’m preaching on this morning?” We both laughed, but there’s a big sense in which it’s not amusing at all.

How desperately we need the grace of God to change us, and that’s a major part of the “good” in the good news of the gospel. I can’t change me but God’s Spirit can and does in the lives of genuine believers. So the next time you start to complain about something, listen for the voice of your Father in heaven. You just might hear Him say, “My child, take another lap around the wilderness” because that’s where grumblers exercise.

Rev. Cox is senior pastor of Meadowview Reformed Presbyterian Church (PCA) and columnist for the Lexington Times (a subsidiary of the New York Times) from which this article is reprinted.