Picture the scene with me. You’re seated with a friend who has invited you to join her at a church that she says is “nothing like you’ve ever been to before.” You’re skeptical and a bit nervous, not knowing what to expect. You were raised with a rather traditional approach to God, howbeit it was also a rather dull one. Most of the time you kept wondering when this thing was going to end so you could get on with your life.

You’re awakened from your momentary daydream with a blast of music, and this “church” starts to rock. Before the two hour service is over you are caught up in spontaneous and uncontrollable laughter. That’s right—laughter, as if someone piped through the air conditioning vents a gaseous substance that made you split your sides. The pastor explains that it’s all an evidence of the Holy Spirit’s work of revival. 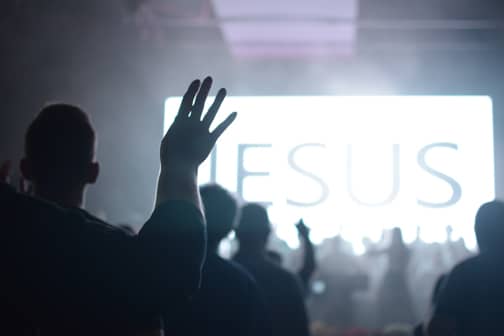 Now, quantum leap-like, you find yourself seated in a huge auditorium that seats 5,000 people. It’s a Sunday morning, but that’s about all that reminds you of your traditional church. The seat you’re in is just like the ones in plush theaters, but with no hymn books in sight. There’s a stage with an orchestra in front just like the plays you’ve been to at the Civic Center. The “service” contains no hymns, and the congregation sings just one song, the words of which are on an overhead projector.

The “pastor” sits on a stool and talks to you about your life and how Christ fits into the picture. The time passes by in a heartbeat. The special music was great, the orchestra flawless and the “talk” was very interesting. This whole thing was anything but what you knew as a kid growing up in Mayberry.

It’s all so fascinating that a few months ago, Peter Jennings of ABC News did a special report entitled, “In the Name of God” which depicted the new wave of “cutting edge” ministries marching under the banner of Jesus Christ. It’s Christianity for the 21st century all right, but is it the authentic Christianity of the first century? Some have dubbed it, “Christianity Lite.”

Don’t get me wrong! I hate boring services as much as the next guy. I wasn’t born a pastor, and while I was growing up, and later in the business world, I had to listen to my share of snooze sermons. But the question to all of this is NOT, “Does it sell?” but, “Is it pleasing to Christ?”

I have recently been preaching a series on the sermons that Jesus delivered to the seven churches of Asia Minor recorded in the front part of the book of Revelation. He didn’t have much good to say about them, I’m afraid. Some of them looked great on the surface, and a few were even growing and successful, but He wasn’t happy with them. Why? Because they weren’t being the church! Many of them had compromised their integrity, and Christ gives them a wakeup call.

What would He say to the “laughing church”? I doubt if He would find them amusing. Laughter is NOT a sign of revival. Mourning and weeping over sin is, but laughter isn’t. That doesn’t mean we Christians have to look like we’ve been weaned on a dill pickle, but it does mean that revival doesn’t come on the wings of hilarity but on the wings of repentance.

What about the church that caters to unbelievers? Well, what’s the church? Isn’t it the gathering of God’s people for the purpose of worship, praise and the ministry of spiritual gifts for the building up of the body of Christ (see Ephesians 4 for a start)?

Every Christian is given marching orders to go into all the world (not the church) and preach the Gospel. The first church in Jerusalem dropped the ball on the hand-off, and Christ had to bring a little persecution to scatter them around the world like salt on a streak. He never intended for them to stay in the holy huddle on Mondays through Saturdays, but that’s what they were doing.

I present the Gospel call in my own preaching, but that’s because I know there are “professing Christians” in every congregation who really don’t have a personal relationship to Christ. And I also know that there are folks who come to Meadowview who don’t know Jesus. They’re lost but looking. I want them to know how to be found, but the primary thrust of our worship service is for believers to worship the living Savior in spirit and truth.

As Peter Jennings said at the end of his odyssey into “new forms of worship”: “Finally, the challenge is this as these churches try to attract sellout crowds, are they in danger of selling out the Gospel?” In too many cases, the answer is “yes.” In too many churches, Madison Avenue has replaced the Scripture, and we become something Christ never intended His Church to be—a place of entertainment instead of true worship.