2 Corinthians 8:9: “For you know the grace of our Lord Jesus Christ, that though He was rich, yet for your sakes He became poor, so that you through His poverty might become rich.”

Have you heard the story about a lady who bought a painting of the Madonna, the Child, and two saints, at a garage sale? She paid $3.00 for it. It was a sort of Christmas painting, but nobody valued it. They all thought it was a discarded relic from someone’s attic. But one day an expert in Italian art saw it and recognized it as a 16th century work of art by a famous Italian master. The appraisers said it was worth $300,000.00. The lady got quite a bargain but she didn’t know it when she bought it, and she might never have known it if the expert had not told her. This is true not only of the Christmas painting, but of Christmas as well. Many people who celebrate Christmas have no idea of its value and worth. They know the story of the baby born in Bethlehem and the shepherds and wise men who came to visit. But they don’t know its real meaning or significance. They think Christmas is a relic of the past, like the old painting.

Let’s look at the real meaning of Christmas as explained by Paul in 2 Corinthians 8:9: “For you know the grace of our Lord Jesus Christ, that though He was rich, yet for your sakes He became poor, so that you through His poverty might become rich.” This text speaks of the source, the cost and the enjoyment of Christmas. 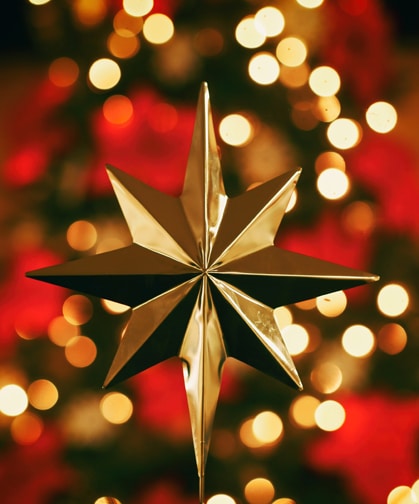 THE SOURCE OF CHRISTMAS

The source of Christmas is grace. It is interesting to note the context of this beautiful verse. Paul is appealing to the Corinthian Christians to help the poor church in Jerusalem. In his appeal to give, he says: “For you know the grace of our Lord Jesus Christ….” This is the common method of Paul. His letters were often prompted by local problems, but he does not treat the local problem with a local method, but rather by means of an eternal truth which bears on the local need. So, what is the highest example of giving? It is Jesus Christ! This is the perfect example of what real giving is! What is the source of this unspeakable gift of Christmas? It is the grace of our Lord Jesus Christ. Grace is unmerited favor. It takes us back to eternity, to the mind of God who determined to save sinful man. Grace can only be understood against the background of human sin. Man who was made a little lower than the heavenly beings and crowned with glory and honor (Psalm 8:5), rebelled against God, refused to obey Him and chose to go his own willful way. “All have sinned and come short of the glory of God” (Romans 3:23).

This hits all of us. We have a very hard time with this. We all think that somehow we deserve God’s grace. We are basically good people. We go to church. We’ve learned the catechism and attended Christian schools. We have made profession of faith. We don’t get into trouble with the law. But we don’t deserve God’s favor at all! It is purely of grace. What the Heidelberg Catechism says in the first question and answer is absolutely true: “I am not my own.” What we are is all of grace. It is by God’s unmerited favor that we can confess: “But with body and soul I belong to my faithful Savior Jesus Christ!” Grace is the source of salvation.

THE COST OF CHRISTMAS

“Though He was rich, yet for your sakes He became poor.” This is the only time in the New Testament that “poor” is used in this verb form. It is the strongest possible use of the word. A verb is an action word. He became poor from being incredibly rich. Look at Colossians 1:15–20 which describe His riches: “He is the image of the invisible God, the firstborn over all creation. For by Him all things were created: things in heaven and on earth, visible and invisible, whether thrones or power or rulers or authorities, all things were created by Him and for Him. He is before all things, and in Him all things hold together. And He is the head of the body, the church; He is the beginning and the firstborn from among the dead, so that in everything He might have the supremacy.”

From these riches He became poor. He became so poor He had absolutely nothing more to give away. He gave His body and blood. “He made Himself nothing” (Philippians 2:7). Jesus experienced the depth of His poverty when He cried out “My God, My God, why hast Thou forsaken Me?” (Matthew 27:46). This was the cost. “God made Him who had no sin, to be sin for us, so that in Him we might become the righteousness of God” (2 Corinthians 5:21). “Hallelujah! What a Savior!”

THE ENJOYMENT OF CHRISTMAS

Notice that riches are ours through His poverty. “He was bound that we might be loosed from our sins. He was forsaken that we might never be forsaken.” All those who believe on Him are made rich in the possession of the glory which Christ laid aside. We are made partakers of the divine nature (2 Peter 1:4). This is Christ’s righteousness, holiness, exaltation and blessedness! Jesus describes our riches in His high priestly prayer (John 17) with these words: “I have given them the glory that You gave Me, that they may be one as We are one: I in them and You in Me” (John 17:22, 23). So we are glorified with Christ and reign with Him. The price of this exaltation and blessedness is His own poverty. Unless He had submitted Himself to all the humiliation of His incarnation and death, we would have remained forever poor, destitute of all holiness, happiness and glory. But we who believe in Jesus as our Savior are rich. By faith in His blood we have the forgiveness of sins and everlasting righteousness. We have a new heart and we are a new creation.

Many do not have a clue about what these riches are. We are living in an age of unparalleled riches materially, and amazing poverty spiritually. We as Reformed believers have a colossal task of explaining this verse. Each word is a sermon.

Do you experience the riches of Christ? Open your eyes and read; listen to Him speak. We are offered something better than the daily pursuit of Mammon, the ball and chain of secular slavery, and the future of nothing. The child of God who knows the grace of the Lord Jesus Christ is not fearful or anxious, because he knows God’s faithfulness is new every morning.

So as we celebrate Christmas this year, let”s think about its source, its cost and its enjoyment. Let’s explain this to our children and grandchildren Let”s sing the beautiful Christmas carols with faith and love. “O come, let us adore Him, Christ the Lord!”