A young teacher in India—a Hindu—was quietly telling some young missionaries that he would choose Communism for his people. Regardless of what was said, he maintained that that was his choice, and anyone who saw him then, knew that he meant what he said. His people and he had come from the lowest class in India, had suffered long, and for many generations had not known freedom. Now this young man, with the fires of awakening freedom in his blood, had cast his lot with Communism, regardless of the cost—and he thought he knew the cost.

Throughout many parts of the world today a desire for the freedom to choose who shall rule them, what they shall say write, and believe has gripped people and thrown them into a cauldron of social upheaval. It seems to matter little to them how well they have been ruled before, or at what cost they are acquiring this so-called freedom to choose, just so they can now make the decisions.

In the sudden freedom to make decisions. there Is a wild scramble for power, a deafening clamor of voices wanting to be heard, and a great surge of humanity aspiring to wealth and power regardless of principles. It is then that these people who fight for freedom find that they must deal with a great, unpredictable monster man’s selfishness and greed. And so another nation struggles to find freedom within the limits set by the evil of mankind.

Into this complex picture comes Christianity, with its message of true freedom In Christ—a freedom which is totally divorced from politics or any other human relationship but which influences all of them. Non-Christian government do not understand this today any more than the Romans and Pharisees did in Christ’s day when he was on earth. They can think only in terms of the here and now, of the material things which they can see, and of the people who must be ruled. And when one tries to explain what freedom in Christ really means one is continually reminded that this cannot be understood by any except those who truly live in the Spirit—for such freedom is only “spiritually discerned” (I Corinthians 2:14). 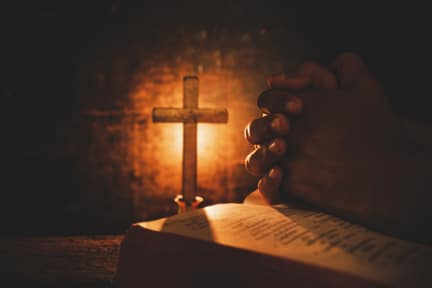 But not only do those who are nonChristians fail to understand this freedom, many Christians do not either. If they did, there would be much more joy and happiness in their hearts—and there would be far greater concern about obedience to the commands of God. Why?

Because freedom, as Christ tells us in John 8:32, is knowledge of the Truth—not simply an intellectual knowledge, but a knowledge gained by faithfully studying, believing and obeying God’s Word. Take, for example, this promise of Jesus: “In the world ye shall have tribulation: but be of good cheer; I have overcome the world” (John 18:33). What powerful words! No evil in the world is stronger than our God; we can come to him in times of temptation, peril, and trial and know that God rules in each situation. We are free from anxiety within the circle of God’s mighty power. But, of course, if you don’t believe this, you have no freedom from fear. Therefore, faith, or trust, becomes the key—a God-given key.

If, then, faith becomes the key to our freedom it certainly is logical that we ought to study diligently to find out just what it is we must believe. And that will mean studying the whole Bible. “In the beginning was the Word, and the Word was with God, and the Word was God. And the Word was made flesh, and dwelt among us…full of grace and truth” (John 1:1, 14).

So Christ is the Word, the Word is Truth, and the Truth shall set us free—free from every bit of bondage to sin. And sin is everything that to wrong in our lives and in the lives of the nations.

There is one more key to this life of freedom. It isn’t difficult to and, for Christ talks about it very often, and so do the Apostles and Prophets.

Christ says, “He that hath my commandments, and keepeth them, he it is that loveth me, If a man love me, he win keep my words: and my Father will love him, and w .. will come unto him. and make our abode with him” (John 14:21, 23). Following these statements comes a promise. “If ye abide in me. and my words abide in you, ye shall ask what ye will, and it will be done unto you” (John 15:1). In studying these verses and their context, we find that what is asked of us is complete obedience and the key to such obedience is love—love for God and our neighbors.

What a difference between the freedom as understood by this Hindu teacher and that freedom which we know. One will deal with evil on the horizontal plane—by force and violence, if necessary—while the other win deal with it on the vertical plane—by calling on and trusting in the One who has overcome all evil. For the one, living will be a matter of intrigue and weighing the forces against him which are prompted by selfishness and greed, while the other, even though he must live in the midst of an this, will be from from its power through faith in Christ.

This freedom of the Christian affects life in every aspect. It turns sorrows into joy, and burdens into blessings. It changes that which is unlovely in our sight into that which is truly lovely; it makes the unbearable bearable and turns our fears and anxieties into sources of inner strength.

What is this freedom? It is simply a life lived in Christ—a trust in God’s sovereign, perfect will and obedience to tho commandment to love our great God with all our heart and soul and mind and strength, and our neighbor as ourselves. These are the two keys to genuine freedom.