On October 31, 2021, we will commemorate the 504th anniversary of the Reformation. What really is the Reformation all about? A good case can be made for asserting that it was primarily about the cardinal doctrine of justification by faith alone. Others would argue that its primary emphasis was on soteriology (the doctrine of salvation) in general. Still others would plant their flag on the critical issue of biblical worship. Or, perhaps biblical authority. Or, in a host of other areas.

John Calvin’s Institutes have earned him the title of “the preeminent systematician of the Protestant Reformation.” His reputation as an intellectual, however, is often seen apart from the vital spiritual and pastoral context in which he wrote his theology. For Calvin, theological understanding and practical piety, truth and usefulness, are inseparable. Theology first of all deals with knowledge—knowledge of God and of ourselves, but there is no true knowledge where there is no true piety.

Pietas (piety) is one of the major themes of Calvin’s theology. His theology is, as John T. McNeill says, “his piety described at length.” He was determined to confine theology within the limits of piety. In his preface addressed to King Francis I, Calvin says that the purpose of writing the Institutes was “solely to transmit certain rudiments by which those who are touched with any zeal for religion might be shaped to true godliness pietas.”

For Calvin, pietas designates the right attitude of man toward God, which includes true knowledge, heartfelt worship, saving faith, filial fear, prayerful submission, and reverential love. Knowing who and what God is (theology) embraces right attitudes toward him and doing what he wants (piety). Calvin writes, “I call ‘piety’ that reverence joined with love of God which the knowledge of his benefits induces.” This love and reverence for God is a necessary concomitant to any knowledge of him and embraces all of life. Calvin says, “The whole life of Christians ought to be a sort of practice of godliness.”

The goal of piety, as well as the entire Christian life, is the glory of God—glory that shines in God’s attributes, in the structure of the world, and in the death and resurrection of Jesus Christ. Glorifying God supersedes personal salvation for every truly pious person. The pious man, according to Calvin, confesses, “We are God’s: let us therefore live for him and die for him. We are God’s: let his wisdom and will therefore rule all our actions. We are God’s: let all the parts of our life accordingly strive toward him as our only lawful goal.”

But how do we glorify God? As Calvin writes, “God has prescribed for us a way in which he will be glorified by us, namely, piety, which consists in the obedience of his Word. He that exceeds these bounds does not go about to honor God, but rather to dishonor him.” Obedience to God’s Word means taking refuge in Christ for forgiveness of our sins, knowing him through his Word, serving him with a loving heart, doing good works in gratitude for his goodness, and exercising self-denial to the point of loving our enemies. This response involves total surrender to God himself, his Word, and his will. Calvin says, “I offer thee my heart, Lord, promptly and sincerely.” That is the desire of all who are truly pious.

For Calvin, piety is comprehensive, having theological, ecclesiological, and practical dimensions. Theologically, piety can be realized only through union and communion with Christ and participation in him, for outside of Christ even the most religious person lives for himself. Only in Christ can the pious live as willing servants of their Lord, faithful soldiers of their Commander, and obedient children of their Father.

Communion with Christ is always the result of the Spirit-worked faith—a work that is astonishing and experiential rather than comprehensible. Faith unites the believer to Christ by means of the Word, enabling the believer to receive Christ as he is clothed in the gospel and graciously offered by the Father. By faith, God also dwells in the believer. Consequently, Calvin says, “We ought not to separate Christ from ourselves or ourselves from him” but participate in Christ by faith, for this “revives us from death to make us a new creature.” 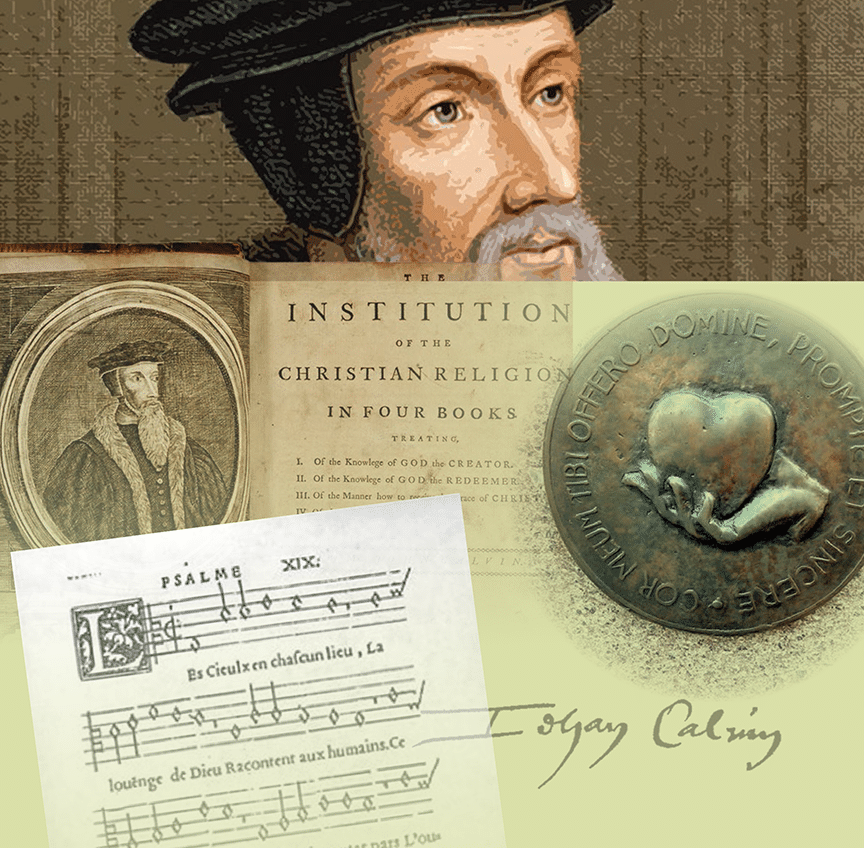 Ecclesiologically, for Calvin piety is nurtured in the church by the preached word, the holy sacraments, and psalm singing. Spiritual growth happens within the church. The church is mother, educator, and nourisher of every believer, for the Holy Spirit acts in her. Believers cultivate piety by the Spirit through the church’s teaching ministry, progressing from spiritual infancy to adolescence to full manhood in Christ. They do not graduate from the church until they die. This lifelong education is offered within an atmosphere of genuine piety in which believers love and care for one another under the headship of Christ. It encourages the growth of one another’s gifts and love, as it is “constrained to borrow from others.” Piety is fostered by the communion of saints.

The preaching of the Word is our spiritual food and our medicine for spiritual health, Calvin says. With the Spirit’s blessing, ministers are spiritual physicians who apply the Word to our souls as earthly physicians apply medicine to our bodies. The preached Word is used as an instrument to heal, cleanse, and make fruitful our disease-prone souls. The Spirit, or the “internal minister,” promotes piety by using the “external minister” to preach the Word.

Calvin defines the sacraments as testimonies “of divine grace toward us, confirmed by an outward sign, with mutual attestation of our piety toward him.” The sacraments, being the visible word, are “exercises of piety.” The sacraments foster our faith, strengthen it, make us grateful to God for his abundant grace, and help us offer ourselves as a living sacrifice to God.

Calvin viewed the Psalms as the canonical manual of piety. Calvin immersed himself in the Psalms for twenty-five years as a commentator, preacher, biblical scholar, and worship leader, in helping compile the famous Genevan Psalter. In the preface to his five-volume commentary on the Psalms, Calvin writes, “There is no other book in which we are more perfectly taught the right manner of praising God, or in which we are more powerfully stirred up to the performance of this exercise of piety.”

Psalm singing is one of the four principal acts of church worship, Calvin believed. It is an extension of prayer. It is also the most significant vocal contribution of people in the service. With the Spirit’s direction, psalm singing tunes the hearts of believers for glory.

Practically, although Calvin viewed the church as the nursery of piety, he also emphasized the need for personal piety. For Calvin, such piety “is the beginning, middle, and end of Christian living.” It involves numerous practical dimensions for daily Christian living, with a particular emphasis on heartfelt prayer, repentance, self-denial, cross bearing, and obedience.

Calvin strove to live the life of pietas himself. Having tasted the goodness and grace of God in Jesus Christ, he pursued piety by seeking to know and do God’s will every day. His theology and ecclesiology worked itself out in practical, heartfelt, Christ-centered piety—piety that ultimately profoundly impacted the church, the community, and the world.

Dr. Joel R. Beeke is president and professor of systematic theology and homlietics at Puritan Reformed Theological Seminary, a pastor of Heritage Reformed Congregation in Grand Rapids, MI, and a prolific author and frequent conference speaker.