John Calvin’s Institutes of the Christian Religion was published in Geneva, Switzerland, in 1536. In our modern age, when some Christians go around saying that God is love (that’s true) but seem embarrassed about His other attributes (holiness, righteousness, little things like that), Calvin’s work, taken to heart and mind is a wonderful antidote.

Let me note just three of the challenges that Calvin’s masterpiece throws out to Christians today. One concerns theology proper, a second deals with ways to glorify God through our work, and a third is wrapped up with that ugly but inescapable word politics.

But Calvin shows how our conditions far worse than we tend to admit to ourselves, since we are such sinners, but at the same time far better, since God does not allow our salvation to wither on the vine.

Calvin’s writing shows us how to be both completely realistic and completely optimistic. Although Calvin is sometimes portrayed as a theorist only, he emphasized the importance of observation: “We ought not rack our brains about God; but rather, we should contemplate him in his works.”

How, then, should we live? At what should we work?

When it comes to looking at careers and callings, Calvin’s contention that God reigns everywhere and human beings can serve God in every church, civil government, school, agriculture, art, and business—made a vital difference four centuries ago.

There was no need to be a monk or a nun to get closer to heaven; God could be glorified in normal work and family activities. Calvin’s teaching led directly to what has become known as the “Protestant work ethic,” because he unleashed individual initiative and encouraged entrepreneurship.

Today, some Christians still think that being a pastor or a missionary is full-time Christian service, but that those who sit at a business desk or fix a car are far lower in God’s economy. Not so God can be glorified in all activities, even gasp!—journalism.

Now, to politics. In various writings Calvin showed from Scripture that Christians should obey even unjust laws, except when doing so means disobeying an explicit command of God.

But what happens when local and national governments disagree? In grievous situations resistance to an unlawful state act, if led by “lesser magistrates” such as local leaders, could be a justifiable maintenance of true law.

This concept was discussed and debated for generations. A book written in 1579 by one of Calvin’s followers, Vindiciae Contra Tyrranos (Vindication Against Tyrants), proclaimed a right to rebel; it was still being read in the 1760s, according to John Adams, and it helped to convince Christian colonial leaders to plunge ahead. 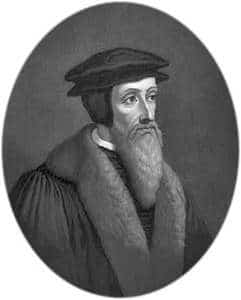 EARTHLY POWER SHOULD BE LIMITED

New Englanders contended fiercely, as 17th-century minister John Cotton had said, that all power on earth should be limited; 18th-century Calvinist ministers such as Francis Makemie and Samuel Davies carried such doctrines into New York, Virginia and other colonies.

The rebels of 1776, of course, had mixed motives the British called them an amalgam of “Presbyterians and smugglers.” But both factions combined to criticize mainline thinkers such as English jurist Blackstone, who wrote that the power of those in authority was “transcendent and absolute … sovereign and uncontrollable.” The colonists’ belief in limited government impelled many to act resolutely to limit it.

In 1997, Christian lesser magistrates in both US federal and state capitals will have great opportunity to “just say no” to ungodly decrees concerning abortion and other matters. When will a governor and state legislature refuse to enforce federal edicts aimed at unborn children? Will US senators stand up against Supreme Court nominees who will not make a commitment to giving endangered unborn children at least as much protection as endangered animal species?

This article was reprinted with permission from the Nov. 1996 issue of World. Marvin Olasky is editor of World.