When we think back to Calvin and his valiant defense of the faith we can only wish that to some extent we might be filled with as much love for the truth and hatred of sin as he was.

He was faithful particularly in that he was impartial. And this appears especially in one particular trait. He insisted that the will of Christ must be done by himself and his friends as well as by his foes. He did not “protect his own crowd” the way we tend to do. He did not “cover up” for his “cronies”. He was not a “church politician”. He did not “wisely time” his attacks on unrighteousness. He was not “tactful”. He was not a “good psychologist”. He was not afraid that “his building program at Geneva” would suffer if he should speak the truth about the heresies and immoralities of the Genevans. He did not stop speaking the truth lest he should “lose his job” or his reputation as a “nice man”. To high and low, to rich and poor, to friend and foe he made known the will and wish of Christ. He did this “not at some convenient time later” but here and now. Not that he was indifferent to consequences; but he left the consequences to God.

Yes, he was courteous. Yes, he was kind. He observed good form. He addressed the king of France and other authorities in language becoming their dignity and office. Nonetheless he told them that their high authority laid upon them special responsibilities for the advancement of the cause of truth. We could all do with a “shot in the arm” of this sort of thing.

THE SUBJECTIVISM OF ROME AND BARTH

Obviously Calvin was thus forthright and impartial in his approach to men because he knew that he could present them with the will of Christ as clearly expressed in Scripture. Only if we really have in the Scripture the clear expression of the will of Christ do we have anything of telling significance to say to men at all. The Scripture is Christ speaking to us as the church and to us as men.

If we had something of Calvin’s spirit what would we do today?

We would, first, as Calvin did, classify Roman Catholicism with subjectivism. Fully appreciating the fact that the Roman Church did hold to some extent to objective revelation, Calvin yet took its method to be essentially the same as that of the individualist subjectivism of the Anabaptists. The “Holy See”, in Calvin’s eyes, ultimately represented the wisdom of sinful man against the wisdom of Christ.

Second, we would classify Barthianism, too, with subjectivism. Perhaps our indifference to the Reformation principle of “Scripture alone” is the tell-tale token of the cancer of subjectivism among us today. Yes, we pay lip service to this principle of Scriptura Sola. But our “policy” estop sour righteous indignation with those who take away the Scripture from the church of God. Barth has taken away the Scriptures from the church of Jesus Christ. He says that God is wholly hidden even when wholly revealed in Christ. And therefore the Scripture is said to be only a witness to the Christ. But if taken as such then the Scripture witnesses to a Christ in whom God’s revelation is also wholly hidden when wholly revealed. In the end the Scriptures and the Christ of Barth witness to the blank.

Yet as Evangelicals and Reformed Christians we keep writing articles and books to show how objective is Barth’s faith. Is it not wonderful, we say, that, over against the subjectivism of Bultmann, Barth insists on the objective foundation of the Christian faith in the Christ-Event? Has he not recently asserted his belief in the resurrection of Christ? He may, we are told, not always agree with us on the exegesis of Scripture; he may even do serious injustice to some doctrines of Scripture, but at least he is our ally against Rome and against modern subjectivism by his theology of the Word.

Yet all this is plainest self-deception. Are we to be deceived by a form of words once more? Shall we be deceived because Barth uses some of our shibboleths? Yes, Barth says that Scripture is the Word of God. He also says that the man Jesus is God. But then he adds that which cancels out and annuls these assertions. He says that in the words of the Bible and in the person of Christ God is wholly hidden. Barth believes in the resurrection of Christ as Historie. “How wonderful!” we shout. But Barth adds that the true objectivity or Christ’s resurrection is primarily in Geschichte, rather than in Histone. Herewith he cancels out every iota of objectivity in Luther’s or Calvin’s sense of the term. But to this we shut our ears. We call Barth an ally against Rome. Yet he is in fact far more subjective than is Rome. We hail Barth as an ally against Bultmann. Yet Barth has dipped his brush in the same pot of subjectivism as has Bultmann. The Christ of Barth, no less than the Christ of Bultmann, is the Christ of speculation rather than the Christ of Scripture.

SPEAKING THE TRUTH IN LOVE

I know where this sort of thing comes from in my own case. I do not like to be alone. I would like to have my little church and my little group to be in with a large and influential movement in the world today. I would like to be well thought of by Barth and the other great theologians of the day. But Calvin, following Paul and Paul following the Christ himself, require me to speak the truth. I must speak the truth in love. I have sinned grievously in not speaking it in love. I have all too often spoken it in self-love apart from Christ. But I must not cover up this sin by the far greater sin of not speaking the truth at all or clearly through my failure to distinguish it from falsifications of the truth. 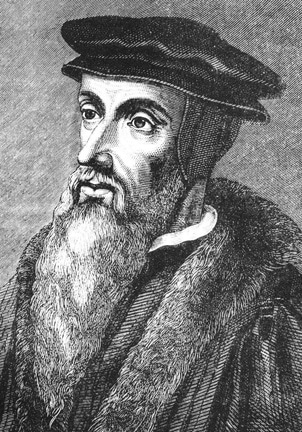 Third, if something more of Calvin’s spirit were in us than there seems to be at present we would, as he did, distinguish between a true and a false ecumenicism.

a. A true ecumenicism seeks to have fellowship with and, so far as possible, witness to Christ with those who seek to make their thought subject to the Christ as he speaks through his infallible Word.

Calvin was deeply appreciative of tho work of Luther, Melanehthon and other Reformers. He sought them out. He took the initiative in trying to come to a common Protestant defense of the faith against the common foe, Romanism. Justification by faith was enough for him. But then it must really be justification by faith in the Christ of the Scriptures. Communion, fellowship, love for fellow evangelicals, by all means! But all this in the Christ of the Scriptures. A common Protestant witness to the faith, by all means. But not at the expense of the truth as it is in Jesus.

b. A false ecumenicism is based on a Christ-ideal projected by men who do not bow to the Christ of the Scriptures.

We find such a false ecumenicism today in the National Council 0f the Churches of Christ in the U.S.A.

In the movement represented by this Council you will find the admirers of Barth’s theology as well as the followers of other leading modern theologians.

The influence of this movement has, in recent years, extended itself to the field of education. The Christian Scholar is a magazine published under the auspices of the Commission on Christian Higher Education. This Commission is, in turn, an agency of the National Council.

The Christ presented in The Christian Scholar is clearly not the Christ of the Scriptures. To believe in the Scriptures and in the Christ of the Scriptures, in the way Luther or Calvin did, would be, according to The Christian Scholar, sectarianism. Even the sectarian principle is, of course, good and useful as a contribution to the “larger church”, only it must then be reinterpreted in terms of the “current theological revival”! The Christ of the “larger church” cannot be directly known from Scripture. Accordingly those who represent him on the college campus must not present to men anything like a world and life view in his name. “A Protestant theory of the university demands no creedal commitment, nor a system of theology or Christian world view to be communicated to each generation of students”.2

What must our reaction be to this modern ecumenical movement? Calvin showed himself willing to “discuss differences” even with representatives of the Church of Rome. But he was unwilling to join with them in a program of witness-bearing to Christ, in the interest of opposing a common foe, the Turks. Shall we stifle our witness to Christ by submerging it in the witness of the “larger church” led by Barth and other new-modernist theologians? And shall we permit the virus of the “current theological revival” to be injected into the educational institutions of the land without so much as raising a voice of protest?

(1) Calvin knew that his people must openly and fearlessly, regardless of consequences, confess the Christ before men lest he refuse to confess us before the Father and his holy angels. In his day words were swords. He lived constantly in jeopardy of his life. Nothing but the grace of God will enable us to do likewise in our day. He urged those who pleaded the example of Nicodemus to stand up for Christ by day as well as by night.

(2) Calvin had brave but also a number of timid colleagues. In true humility and holy boldness he stirred them up so they might stand with and next to him in the common task of witness-bearing of the church.

(3) Calvin had friends who turned liberty into license, who were Protestants because they hated priests. The Reformer of Geneva insisted that they must be Protestants first all because they loved Christ and wished to manifest their faith in lives of true obedience to the Lord. Men of every station must submit themselves to the discipline of the gospel.

May God in our day give us grace openly, unitedly to preach and teach the Christ of the Scripture so that men may not be misled by modern subjectivism even when it appears in the guise of the “new church” and “the theology of the Word,” leading men astray with a false Christ.