The first, The Quest for Comfort, introduces a new generation to the history of the Heidelberg Catechism. In fewer than twenty pages of print, we are introduced to Frederick III, Zacharias Ursinus, and Caspar Olevianus and the contributions they made to the church of Jesus Christ.

While many books have been written about the catechism itself, few books delve into the lives of the men behind the document. Whereas many young teenagers of my generation were given Thea Van Halsema’s book, Three Men Came to Heidelberg, Rev. Boekestein’s book offers the history of these three men to a younger audience.

What makes the beautifully-illustrated The Quest for Comfort so pleasant to read is that it very quickly explains why the three men who came to Heidelberg sought to write a document that stressed the comfort of belonging to Jesus Christ. God certainly used the difficulties and heartaches these men faced to lead them to write a strong, yet wonderfully assuring testimony of their faith.

The second book by Rev. Boekestein is entitled Faithfulness Under Fire and is the story of Guido de Brès, the author of the Belgic Confession. Like The Quest for Comfort, it is written for young children in straightforward and direct fashion. Without being graphic, it relates some of the persecution and violence that faced the author of our beloved confession. It also portrays well the dedication and commitment of this reformer to bring the gospel to all who would listen—even his adversaries.

Both of these books, written by Rev. Boekestein and illustrated by Evan Hughes, will make a beautiful addition to any child’s library. Young readers will most certainly gain a greater appreciation for the difficulties the early reformers faced and also the dedication they had for the great truths of Scripture. We thank Reformation Heritage Books (Grand Rapids, MI) for publishing these two volumes and trust that they will encourage Rev. Boekestein to continue his fine work in this area.

For young readers who would like a more in-depth book about Guido de Brès, who better to turn to than one of his descendants? Inheritance Publications (Neerlandia, AB, and Pella, IA) has released Trust God, Keep the Faith by Bartha Hill-de Brès. Just over eighty pages, Trust God, Keep the Faith follows the life of the early reformer from the desires expressed by his parents before he was born in 1522 to his martyrdom in 1567.

The blessings and the tragedies throughout the book clearly illustrate how God used special men, working together, to advance the cause of the Reformation. The reader cannot help but be moved by their convictions and resolve to bring the Word of God to the people of God in their own language.

Hill-de Brès writes in a fluid and captivating manner. Her style is easy to read for young teenagers. They will, no doubt, marvel over the hunger that the people had for the precious Word of God that the church refused to feed them, admire the determination of de Brès to preach the pure gospel in spite of threats of imprisonment and death, and rejoice over the document de Brès wrote that provides such a wonderful summary of God’s Word.

Interesting also is the brief epilogue that describes the “medieval internet,” as Hill-de Brès calls it. Clearly and succinctly, the author gives a timeline of the development of the printing press and the effect that this invention had on world.              Two years ago, The Outlook had the privilege of interviewing Simonetta Carr upon the release of two of her books, John Calvin and Augustine of Hippo (March/April 2010). Although these books are beautiful enough to be “coffee table books,” they serve a wonderful purpose. They are part of the series Christian Biographies for Young Readers and are dedicated to readers age 7–12.

In the interview, Mrs. Carr mentioned that her new book in the series would be about John Owen. How wonderful now to be able to receive a copy of this book, along with the next in the series (Athanasius) from Reformed Heritage Books in Grand Rapids.

John Owen traces the life of one of the greatest Puritan preachers and writers from his high position under Oliver Cromwell to his persecution under King Charles II. A brilliant man, Owen delighted in proclaiming the gospel, be it before great dignitaries or small gatherings in his home.

The book moves through the different events in Owen’s life with great ease, describing his fame and humility and his accomplishments as a teacher, pastor, and writer. It encourages young readers to find some of Owen’s easier-to-read writings and to have their parents read Owen, as well.

The fourth book in the series by Simonetta Carr is Athanasius. This book follows the life of young Athanasius to his death in AD 373. It traces his learning under Alexander, his battle with Arius and his followers, his conflict with (and between) Romans leaders, and his later life. Young readers will learn that our creeds did not come without difficulty but with great thought and study of God Word and often accompanied by persecution.

All four books in the Christian Biographies for Young Readers series are beautifully illustrated, easy to read, and very inviting to the young reader. A wonderful addition to each book is the timeline of the individual’s life and a section called, “Did You Know?” that gives additional tidbits of information about the people mentioned throughout each book.

We look forward to the upcoming volumes that reportedly include Lady Jane Grey, John Knox, and Jonathan Edwards. Parents looking to give lasting books should consider these attractively-bound volumes that would look beautiful on any coffee table or bookshelf. Churches looking for a gift to give to Sunday school students at the end of each year are encouraged to review the Christian Biographies for Young Readers. Upon graduation from Sunday school, students would have a beautiful set of books that they would be sure to read time and time again. 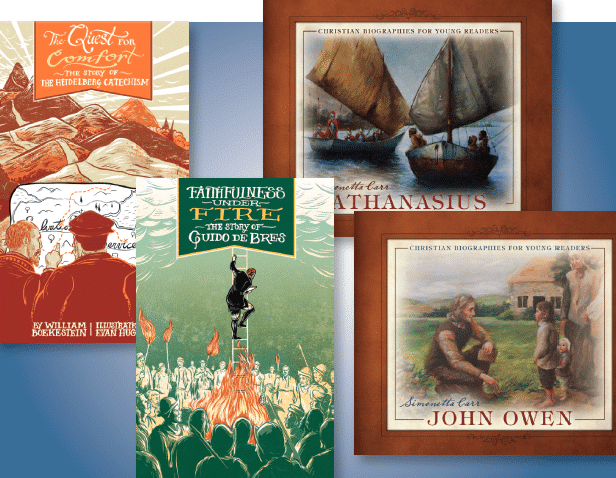