No one doubts that Calvin, who lived more than four hundred years ago (1509–1564), is still important today. His importance can be illustrated by the ongoing Calvin research. There are regional Calvin conferences, and once every four years an International Congress on Calvin Research meets. To date, five congresses have been held, most recently in Edinburgh, 1994. The papers of that Congress have not yet been published. However, a book containing the papers of the previous Congress, held in Grand Rapids, 1990, was sent to us for review. It contains not just the text of the main speeches but also summaries of papers presented at seminars.

The title of the book could give the impression that Calvin’s doctrine of Scripture is the focal point of the articles. However, only one speech is devoted particularly to Calvin’s doctrine of Scripture, namely, W.H. Neuser’s discussion of Calvin’s understanding of Holy Scripture. In addition, E.A. De Boer, now a minister of the Reformed Churches in the Netherlands (liberated), introduces his study on Calvin’s eschatology, based on Calvin’s lectures and sermons on Ezekiel. Most speeches, however, deal with some aspect of Calvin’s life or theology. 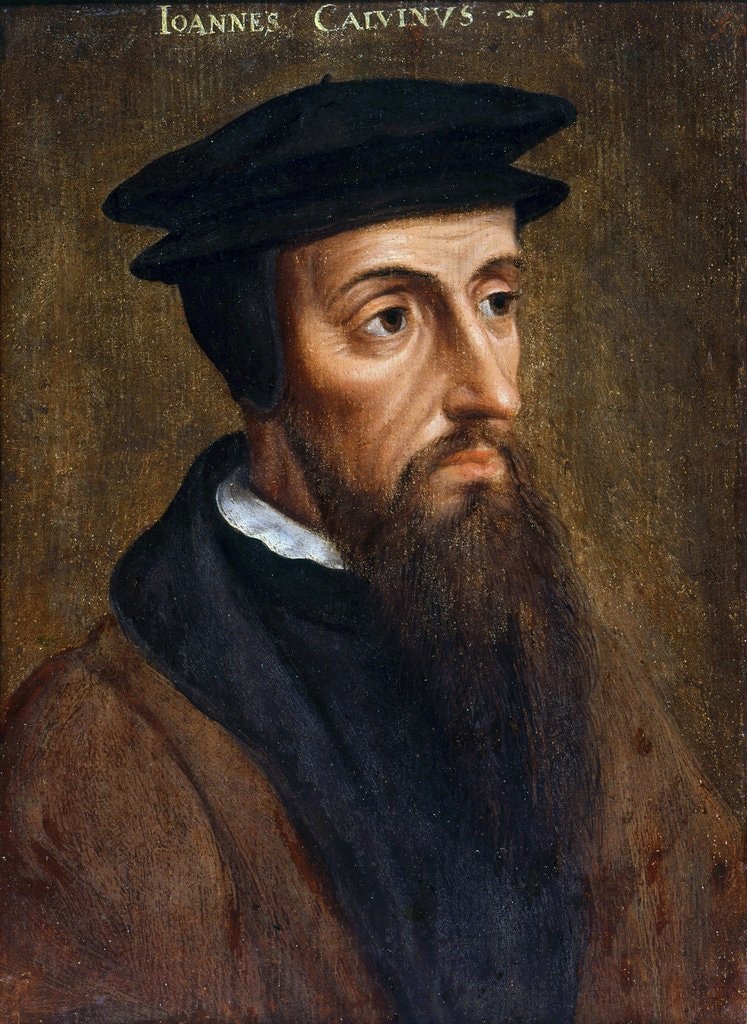 It is remarkable that so much attention is devoted to the early Calvin. H.A. Oberman presented an impressive study on the development of Calvin, closely connecting it with tendencies in the late Middle Ages and Renaissance. Calvin was reticent to speak about his own life but in the introduction to his commentary on the Psalms he stated that God through a sudden conversion had brought him to submission. Oberman discusses this expression (115) and, later on, makes it more concrete:

Calvin was at once driven by the ever present awareness (meditatio!) of the threat of drowning in the abyss of death, devil, and hell, and drawn by a deep-seated trust in the promise of God’s saving intervention. To him applies not the expression “come hell or high water”; the diabolical abyss is hell and high water. Yet the mercy of God subdues the power of the Beast, so forcefully formulated in the outcry:

Two more articles discuss the early ministry of Calvin. R Horcsik deals with Calvin’s first period in Geneva (1536–1538) and C. Augustijn discusses Calvin’s stay in Strasbourg (1538–1541). These articles show how Calvin slowly, and not without making mistakes, became the reformer of Geneva. Calvin becomes more real when you see him trying to find his way to organize Reformed church life.

W.J. Bouwsma published his controversial psychological approach to Calvin in 1988, two years before this Congress was held. Bouwsma portrays Calvin as a human being driven by terror, since he united in himself adventurous humanism and conservative scholasticism. It is indicative of the impact of Bouwsma’s approach that it was decided to devote a special seminar session to it (209ff.). Moreover, several papers dealt with this issue. Notably Oberman gave much insight by providing the theological background for some expressions Bouwsma used (127–140).

The articles on Calvin’s theology deal, among other topics, with his covenant view a.B. Torrance), his view on Scripture (W.H. Neuser), the image of God (L. Anderson), his catechisms (N. Watanabe and A.D. Pont), the marriage laws of Geneva A.R Watt), and the practical syllogism (K.W. Yu). R.C. Gamble summarizes the current state of Calvin research. It is impossible to go into all of these articles. In the next issue I hope to come back to Neuser’s study of Calvin’s view on Scripture. Here I would like to make a remark on some of the other studies.

J.B. Torrance, dealing with covenant theology, asks the question whether Calvin was a federal theologian (16). His article presents much information about federal theology in the 16th Century but is disappointing in the way it fails to answer Torrance’s own question. It is mentioned that Calvin frequently used the term covenant, particularly in connection with the relation between the Old and New Testament and with baptism and the Lord’s Supper (18). Since the article does not discuss these issues, however, it fails to help us understand Calvin’s view on the covenant.

J.A. De Jong follows a now popular trend in discussing Calvin’s spirituality. He investigates Calvin’s commentary on the Psalms to get insight into Calvin’s faith life. In his view, the Psalms are important for Calvin as a “mirror of his soul.” De Jong brings out how Calvin emphasizes trust in God’s promises, confident prayer, and even the call on God to punish his enemies. Calvin knows of the conflict between fear of God and trust in God and he is aware of the importance of corporate worship for the believer. De Jong uses this material to oppose the image of Calvin as cold and hard. The Commentary on the Psalms shows him as an experiential believer of considerable depth and warmth (4).

This is an interesting approach to Calvin’s commentary on the Psalms. DeJong is, in my opinion, justified in his defense of Calvin’s living faith. That his faith was heartfelt and not distant or rigid is easily seen in his letters, and in the Introduction to his Commentary to the Psalms. I wonder, however, whether this can be proven from Calvin’s comments on the Psalms. DeJong says often that the Psalms were important to Calvin as a mirror of his soul (see p. 2). Calvin, however, speaks here about the life of believers in general:

I have been accustomed to call this book, I think not inappropriately, ‘An Anatomy of all the Parts of the Soul’; for there is not an emotion of which anyone can be conscious that is not here represented as in a mirror. Or rather, the Holy Spirit has here drawn to life all the griefs, sorrows, fears, doubts, hopes, cares, perplexities, in short, all the distracting emotions with which the minds of men are wont to be agitated.

It is true that Calvin compares himself with David, and in this connection speaks of “the small measure of experience which I have had by the conflict with which the Lord has exercised me” and that Calvin goes on to apply events from the Psalms to his own life.1 But the explanation itself indicates that Calvin connects the Psalms with the lives of the believers, as many quotations in De Jong’s article indicate. Calvin retains here his reticence; he is not so much discussing himself as well as the lives of every believer. I disagree with the conclusion of De Jong: “The Psalms commentary is primarily the anatomy of Calvin’s soul” (14).

Two articles are devoted to the catechisms Calvin wrote for Geneva. N. Wanatabe concentrates on the differences between them. The first (1538) is in the form of positive explanation, the second (1541) presents the material in the form of questions and answers. In the first, the order is Law, Creed and Prayer, while in the second the Creed is discussed before Law and Prayer (225). Our Heidelberg Catechism follows the second Catechism of Calvin. Wanatabe does not mention that the second is much larger than the first. A translation of the later catechism stretches out over almost fifty full pages.2 Small wonder that the children used a shortened extract for profession of faith, as AD. Pont states (238). Noteworthy is his statement on profession of faith in Calvin’s Geneva: “The test was not in the first place a test of personal faith but of whether everyone accepted the confession of the church” (238).

I am not so sure that this formulation is felicitous. Would Calvin accept a dilemma between personal faith and accepting the confession of the church? His catechism, however, often asks for belief in a doctrine. To give only one example, the discussion of God’s creation and providence is followed by this question and answer:

What benefit accrues to you from the knowledge of this? Very much. For it would go ill with us, if anything were permitted wicked men and devils without the will of God; then our minds could never be tranquil, for thinking ourselves exposed to their pleasure. Only then do we safely rest when we know them to be curbed by the will of God and, as it were, held in confinement, so that they cannot do anything but by his permission, especially since God himself undertakes to be our guardian and the captain of our salvation.3

The Catechism of Geneva does require personal faith, just like our own Heidelberg Catechism. On the other hand, Pont’s brief discussion4 does show that profession meant agreement with the doctrine of the church. Calvin did not go for an abbreviated Gospel; his catechisms show an intention to keep the church together on the basis of the whole doctrine of salvation.

In conclusion, this book leaves no doubt concerning the importance of Calvin. Neglecting Calvin will be to the detriment of the Reformed church. The temptation is real, however, to treat a genius like Calvin as if he were a meteorite fallen from the skies. One of the things that can be learned from the studies in this book is that Calvin should be seen in the context of his time and the discussions of his time. Calvin himself had to grow and develop. It also becomes clear that Calvin was a child of his time, addressing the situation of his time, and discussing issues with the people of his time.

Reading this book, however, also does leave one with the question whether everything Calvin ever wrote and said was equally important. The studies reach out into the remote corners of Calvin’s life and work, and hardly ever deal with his Institutes. Calvin, however, laboured over his Institutes all his life, and as he grew in understanding, updated it. He wanted to be known, first of all, by this book. We should not, through the proliferation of studies on every possible aspect of Calvin, lose sight of his main works, through which he intended to be known.

4 Pont has elaborated on this issue in an article in the Afrikaans language: “Kategese, Kategismusse en die belydenis van geloof in Geneva in die dae van Calvyn” in Heroonnde Teologiese Shtdies, vol 42,2 (1991), 431–441.

Reprinted with permission from the Clarion, January 19, 1996.