Genesis 24 is the longest chapter in the book of Genesis. In it, the same story is told twice—once as it happens and once as it is reported by Abraham’s servant. God’s testing of Abraham is now complete, and we see the focus shift from the patriarch to his son, Isaac. Redemptive history is beginning to move toward the second patriarch. This move is made complete at the end of the chapter when the new bride, Rebekah, enters Sarah’s tent, thereby declaring herself as the new matriarch of Israel. God’s concern in Genesis is ever moving toward the fulfillment of the promise to its completion.

After Sarah’s death, Abraham still had one more task of faith for which he felt responsible. At one hundred forty years old, Abraham was wealthy enough to retire and anchor himself in the present. Instead, he looked to the future—to the promises of God—and acted on those promises. He knew that the promises God had given to him would be carried through his son until the day of their fulfillment. Isaac was not only the twice-given miraculous gift of God’s faithful love, he was also the heir to the promises God had given to Abraham. How necessary, then, for his son to have a wife who believed in God and who would be bound to the promises of God. Abraham, however, lived in country surrounded by godless Canaanites whom his ancestors would one day dispossess of their land. If Isaac married one of them, her ties to her family would make such dispossession difficult. In addition, she would bring false gods into the family. Nor could Abraham permit Isaac to leave the land of promise lest he fail to return. His solution was to send a trusted servant to find a wife for Isaac. As surely as God had provided the ram in thicket earlier for Isaac (Genesis 22:13), so also God would provide the perfect bride.

Scripture does not identify the servant Abraham entrusted with the task of finding a wife for his son. Most likely it was Eliezer of Damascus whom Abraham had once planned on making his heir (Genesis 15:2). Whoever he was, he was a pious man who believed in the power of prayer. He was loyal to his master and insistent on seeing his responsibility through to the end.

In faith, Abraham’s servant set out with ten camels loaded with jewelry, garments, and other gifts, perhaps as a dowry or to illustrate Isaac’s ability to support a wife. After traveling about four hundred fifty miles to the city of Nahor, the servant bowed before God in prayer, requesting a set of stipulations in determining success. Some have compared this prayer to that of Gideon (Judges 6ff.); others to the prayer of Elijah at Mount Carmel (1 Kings 18). Gideon, on the one hand, had no reason to make any request of God. An angel of the Lord had told him that he was the one who would defeat the Midianites. Instead of acting in faith, Gideon responded improperly by proposing a series of tests for God to answer. On the other hand, Elijah never doubted the will of God and forcefully called for fire from heaven to prove God’s omnipotence.

Abraham’s servant acknowledged his own weakness and sought divine guidance from God. Unlike Gideon, he did not ask for a miraculous sign from God. Instead, he rested in the providence of God to use ordinary events to reveal His will for Isaac’s bride. In his prayer he asked for an industrious, hardworking woman who was also hospitable and who embodied the traits of the godly woman described in Proverbs 31. With this prayer, the servant placed himself in complete reliance on God, for only the sovereign God could steer events in such detailed fashion.

God answered the servant’s prayer before he was even finished presenting it before God. A young, beautiful girl offered him water. After he had finished drinking, she drew water for all the camels. This was no small chore. Camels can drink twenty to thirty gallons of water—each! Ancient wells were large, deep holes in the earth with steps leading to a spring. Each drawing of water would require substantial effort on the young lady’s part. If Rebekah’s water jar was typical for the day, it would only hold about three gallons of water. That meant that Rebekah had to take between eighty to one hundred trips down and up the stairs to the spring to water the thirsty camels.

After the chores were completed, the servant discovered that God had led him to the right family as the young girl was a relative of Abraham. Immediately, the servant bowed down and worshipped God. The servant’s mention of Abraham’s name also triggered a glad response from Rebekah. She was so filled with excitement that she ran off to tell her family, leaving Abraham’s servant behind.

Arriving at the home of Abraham’s relatives, the faithful servant of Abraham retold the events that had taken place, carefully including Abraham’s commission to find a bride for his son, his bride-finding quest to Nahor, and his providential encounter with Rebekah. The servant of Abraham was convinced that if Rebekah’s parents understood how God had led him to their daughter, they would have no choice but to let Rebekah return with him to be Isaac’s bride. Although they showed great hospitality to the servant of their distant relative and acknowledged that the matter was from God, the family was reluctant to send Rebekah off immediately. Her mother and brother asked that Rebekah remain with them a few days (or months) before she embark on such a lengthy journey.

Already in this chapter we received hints as to the cunning of Rebekah’s brother, Laban. He showed Abraham’s servant great hospitality—after he saw the ring and bracelets Rebekah had received (Genesis 24:30). He also made special mention of the camels (v. 31), animals considered to be a luxury even for the wealthy. No doubt Laban was already planning ways to unburden the traveling servant of Abraham of his possessions. Whatever plans he may have had, present or future (Genesis 29, 30) to gain materially from that which rightfully was promised to Abraham, God used him to supply three wives to the offspring of the patriarch, thus moving the promises further to their completion.

Rebekah, on the other hand, saw the hand of God in the earlier events of the day. Like Abraham decades earlier, she knew that God was calling her to leave her own country, her family, and her father’s house to go to a land of which she knew very little. “Rebekah” sounds much like the Hebrew word for “blessing” (berakah). The blessing Rebekah received on leaving her home was very similar to God’s promise given to Abraham. The blessing included the promise of many descendants, possession of cities, and dominion over enemies. Although she did not realize it, the future bride of Isaac was receiving the same blessing that God gave to Abraham after he had offered her future husband as a sacrifice to God (Genesis 23:17).

Rebekah and the Church

One can only imagine the conversations Rebekah had with Abraham’s servant during that month-long trip to Canaan. How curious she must have been about her future husband, about the land to which she was traveling, about the customs, and so much more. Early church fathers have portrayed the search for Isaac’s bride as analogous with the bride of Christ.

The arranged marriages that were the custom in the ancient near east illustrate a pattern of grace. Abraham is said to represent God the Father seeking a bride for His Son, Jesus Christ. In His grace, the sovereign God initiated our journey into the church by choosing to take a bride for His Son (Ephesians 1:4). Jesus speaks of those whom He saved as those whom the Father gave Him (John 17:6–12).

Isaac, the son, is said to represent Jesus Christ. Isaac had submitted himself to be sacrificed by his father. Whereas Abraham did not have to complete the sacrifice, God’s Son paid a great price for the redemption of His people—not silver or gold, but His own precious blood was shed for His bride (1 Peter 1:18, 19). Now, the ascended Christ waits for that glorious time when He and the bride are united forevermore (Revelation 19:7–9). 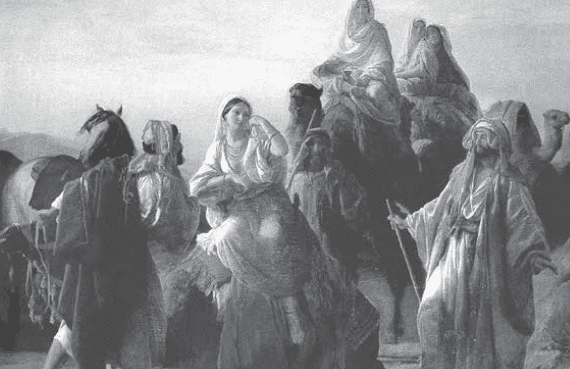 According to the early church fathers, the servant of Abraham represents the Holy Spirit. Even as the servant never spoke on his own behalf but always pointed to the father and son, so also the Holy Spirit draws the church to the Father through the Son. It is the Holy Spirit who convicts those within the church of their sin and misery, reveals that deliverance is available through Jesus Christ, and then calls them to live in gratitude to God for the salvation He has provided.

And finally, Rebekah represents the church as she trusts what she has learned concerning the son from the servant, trusting that his word is true, and that her voyage is safe as long as she follows his leading. As Rebekah left all behind for her groom; so the church travels through this barren land looking ahead to city whose architect and builder is God. Even as Rebekah must have listened eagerly to the servant tell her about her soon-to-be groom and the promises God had given to Abraham’s family, the church eagerly listens each Lord’s Day to the work accomplished by the Groom on the cross of Calvary, knowing that through Him come the promises of reconciliation, forgiveness, and life eternal.

1.    Consider the following options open to Abraham in finding a bride for his son.

a.  He could marry Isaac to the daughter of a local Canaanite chieftain.

b.  He could send Isaac out of Canaan to Haran for a bride.

c.  He could send his trusted servant to his brother to find a bride.

2.    Where do you suppose the servant learned to pray and worship as he did?

3.    Was the prayer of the servant a testing of God?  May we ask of such things of God?

5.    Why did Abraham’s servant feel confident that the first girl who offered a drink to his camels was the wife that God had chosen for Isaac?

6.    Who is Laban and how did he respond to the speech of the servant?

7.    How does Rebekah’s response remind you of Abraham’s faith?  What similarities do you see between the blessing Rebekah receives and the blessing God gave to Abraham?

8.    Do you think the comparison of this chapter to the Church of Jesus Christ is appropriate?