In this chapter we have the first biblical reference to mourning for the dead and burial. Sarah is also the only woman whose age is recorded in the Scriptures; she was one hundred twenty-seven years old. The marriage of Abraham and Sarah is the first godly marriage the Bible unfolds for us. Sarah had been Abraham’s companion for almost three quarters of a century. Throughout their marriage, she had shown herself to be a faithful, submissive wife (1 Peter 3:3–6) in times of prosperity and poverty, sickness and health, joy and sorrow. They had gone through many trials together in pursuit of God’s calling. Many times they were victorious over the trials set before them; other times they had led one another astray. They were by no means perfect, but they were one flesh, united in marriage by God, and upon Sarah’s death, Abraham mourned and wept.

Genesis 23:2 indicates that tears and mourning are perfectly appropriate responses to grief. While we do not grieve as those who have no hope (1 Thessalonians 4:13), we still acknowledge that death is the final enemy. It is so for several reasons.

First of all, death is something we know nothing about. All that we can understand or imagine is based upon either our experience or the experience of others. No one who has died during our lifetime has ever come back to tell us about it. They die and are seen no more. Death is the great unknown.

There are all kinds of books written about what happens at death. One author claimed to have spent several minutes in heaven. His book became so popular that another author wrote about the several minutes he spent in hell before being revived by doctors. Have you ever noticed that all of the books written about the afterlife were written by people who were still alive?

For the Christian, however, there is One who has gone beyond the veil of darkness that is the grave who returned. Jesus says, “I am the Living One; I was dead, and behold I am alive for ever and ever! And I hold the keys of death and Hades” (Revelation 1:17, 18). Jesus has experienced death and tells all who trust in Him that they need not be afraid.

Only Jesus was dead and buried. He alone came back from the dead to tell us about it. He appeared to His disciples and told one of them, “Put your fingers here; see my hands. Reach out your hand and put it into my side. Stop doubting and believe” (John 20:27). The fact that Jesus rose from the dead should change our whole perspective on death because He proved that it has no power over those who love and serve Him. 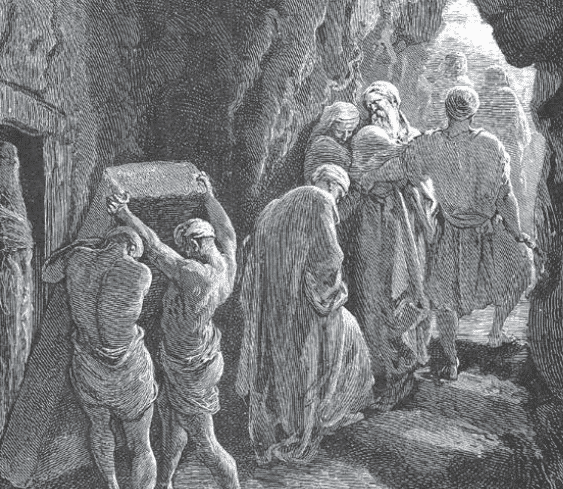 A second reason most people recoil from death is because they instinctively know, as the Bible teaches, that after death comes the judgment (Hebrews 9:27). When a person dies, that person shall reap whatever he has sown here on this earth. Everyone will be repaid for all they have done and every word they have spoken. Those who have rejected Christ, lived in sin, and mocked God will be judged by God.

That is a very frightening thought even for the Christian because we know that we are all sinners. Yet for the servant of Christ, the sting of death has been removed (1 Corinthians 15:56). It is removed not because we are better than others, but because the Christian has been clothed in the righteousness of Jesus Christ who paid the penalty for sin with His own precious blood.

The resurrection of Jesus Christ is described by Paul as the firstfruits of them that sleep (1 Corinthians 15). If He is the first fruit, there must be a second fruit. The farmer who cuts his hay in the spring refers to it as the “first cutting” because he fully anticipates that there will be a second cutting. So also, with Christ as the first fruit of the resurrection, there will be a second fruit. Those who believe in Him are the full harvest.

A Place in the Promised Land

In spite of the many times God had promised Abraham the land, Sarah’s death presented a problem. For sixty years Abraham had lived in the land God had promised would one day be his. Still, Abraham did not own any land—not even a small plot in which he could bury his beloved wife. He still has to identify himself as a stranger and sojourner in the land.

In preparations for a proper burial, Abraham approached the sons of Heth and asked for a plot of land. When the sons offered one of the choicest from among their own graves, Abraham refused, asking instead to buy the cave of Machpelah owned by Ephron the Hittite.

Not to be outdone by the sons of Heth, Ephron also offered the land to Abraham as a gift. Abraham ignored the offers to receive the land as a gift. He rejected the suggestion that his wife be buried among the dead of another nation who worshipped false gods. When Abraham insisted that the Ephron accept payment for the land, Ephron announced the value of the land and acted as though he were doing Abraham a favor by accepting the money given.

Abraham could not have expressed his faith in a stronger way than to purchase this first piece of ground as a grave for his wife. First of all, in refusing to bury his wife among the Hittites, Abraham distinguished himself from them. This was to become the family plot. It was where Abraham would be buried when he died (Genesis 25:9); it is more than likely the place where Isaac was buried. The comment that Isaac “was gathered up to his people” (Genesis 35:29) points back to the purchase of this cave years earlier. In addition to Isaac, Rebekah his wife, along with Jacob and Leah were buried in this same plot of land (Genesis 49:29–32). To be buried among one’s own people was extremely important in ancient times. It was to be among one’s children and grandchildren forever. The purchase of a separate burial plot by Abraham was an expression of faith that neither he nor his descendants would be counted among the Hittites or Canaanites. They would become a separate nation.

In addition, the purchase of the land expressed a trust that the separate nation would dwell in this particular land. This became a down payment to the guarantee that the promise God had given would one day be fulfilled. When Abraham received a clear title to the land in front of many witnesses, the cave in Machpelah became the firstfruits of the everlasting possession that God had promised in Genesis 17:8.

This was the only part of the promise that ever became real to Abraham; it was the only piece of land that he ever owned. Yet, he did not doubt that one day all the land would be his. By faith, Abraham intended to stay in the land. He was determined that Sarah would be buried in the land he owned. His wife would be buried in land he purchased until the time when God would give to him all the land. Abraham would not become a debtor to those who were to be dispossessed of the land in the future.

Looking to the Future

The cave of Machpelah became the bond that bound the descendants of Abraham together. When the Israelites were in slavery in Egypt centuries later, this cave drew their hearts to the land of promise as with magnetic power. It was with the same confidence that Abraham had, that they were assured that their time in Egypt was temporary. One day they would return to the land. It was the place where the ashes of their ancestors rested. Even prior to their slavery, Abraham’s grandson Jacob, while enjoying the plush fields of Goshen, insisted that upon his death he be buried in Machpelah (Genesis 50:5, 13). Even the second in command in Egypt, Joseph, who enjoyed all the luxury the world had to offer, asked the sons of Israel to bury him in the land of his father upon their return to the land promised to Abraham, Isaac, and Jacob (Genesis 50:24, 25).

Many commentaries claim that the price Ephron charged for the land was as much as ten times higher than property values at the time. In addition, Ephron insisted that Abraham take not just the cave but also the field and trees that surrounded it. Perhaps he thought he could take advantage of a man grieving the loss of his wife; perhaps he asked a high price expecting Abraham to dicker as he had done earlier with God (Genesis 18). Without negotiating the price, Abraham counted out the coins and paid Ephron. Who got the better deal? Ephron walked away with a pocket of silver he could not take with him to the grave; Abraham received a grave that was a symbolic reference to the inheritance he could not lose.

1.    How is Abraham’s response to Sarah’s death a model for us?

2.    How is the Christian’s grief different from that of the non-Christian?

3.    Where was Abraham living when Sarah died?  What problem did her death present to Abraham?

4.    Why is death considered to be the final enemy?  How has Jesus Christ removed the fear of death from the believer?

5.    Why would Abraham refuse to have Sarah buried among the Hittites?

6.    Why was Abraham insistent on paying for the land that was offered to him for free?

7.    What is significant about Abraham’s purchase of some land?

8.    To what did the cave of Machpelah bear witness?  What was the significance of this site for Abraham’s descendants in the following centuries?