It had been twenty-five years since Abraham had left Haran based upon a promise that God had given to him—a son. Few events, apart from the birth of Jesus, were as anticipated as this event. Finally in Genesis 21—after many misadventures—anticipation became reality when to Abraham and Sarah a child was born, a son was given. Yet, for all of its anticipation, it is recorded in just seven verses.

Like the birth of Jesus, most of the world would not have seen anything noteworthy in the newborn child. Some may have remarked that it was unusual to see a child born to such an aged couple; others may have smiled and even rejoiced with them; but few would be able to understand the great significance that this child of the covenant held and how he was to carry on the promise given in Genesis 3:15 and fulfilled in Jesus Christ.

The Work of the Lord

The opening verse of Genesis 21 tells us, “The Lord did for Sarah what He has promised.” In Genesis 18 God promised Abraham and Sarah that they would have a child within the year. As we read and studied that promise in Lesson 11, we never once doubted that God would keep His promise. We had the unfair advantage of hindsight because we knew how the story would end in the nativity of Isaac.

Abraham and Sarah were not so fortunate. Even if they may have watched the calendar from that day the Lord had visited them, they found it to be a year filled with tragedy. Sodom and Gomorrah had been destroyed, leaving the patriarch and his wife to wonder concerning the whereabouts of their nephew and his family. Shortly thereafter, the couple had been separated when Abimelech came and took Sarah away from her husband. Only by the mercy of God were the two reunited.

And then the Lord did for Sarah what He has promised and she became pregnant—at the age of eighty-nine! Soon, Isaac, whose name means laughter, was born. The divinely-given name recalled the earlier laughter of Abraham and Sarah when the Lord first announced that Sarah would have a child (Genesis 18). Both Abraham and Sarah were skeptical at that time, but God would have the last laugh. Indeed, is anything too hard for the Lord (Genesis 18:14)?

The joyful laughter that echoed in the tent was not just because Isaac was born. Certainly there was the acknowledgement that God had done a great miracle in giving a child to this elderly couple. No longer would they laugh at Sarah because she was barren; instead they would laugh with her because of her child. The true heir of Abraham had been born. In obedience to God’s command, Abraham circumcised Isaac on the eighth day, the first child recorded in Scripture as being circumcised so soon after his birth.

Perhaps even more important than the birth of Isaac, however, was the great lesson that Abraham and Sarah had learned: that God is faithful to His promises. God had made several promises, and they had seen them partially fulfilled. They were in a new land; they had been a blessing to other nations; and so they believed God. Still, there had been times of doubt, as well. At times they had taken matters in their own hands, thinking that it was somehow necessary for them to help God in carrying out His promises. Each time it had turned into a disaster. Sarah had even come to a point where, after waiting ten years, she discounted her role in the promise and offered up a substitute promise-carrier in Hagar. Now, after twenty-five years, in spite of their doubt, God was faithful. 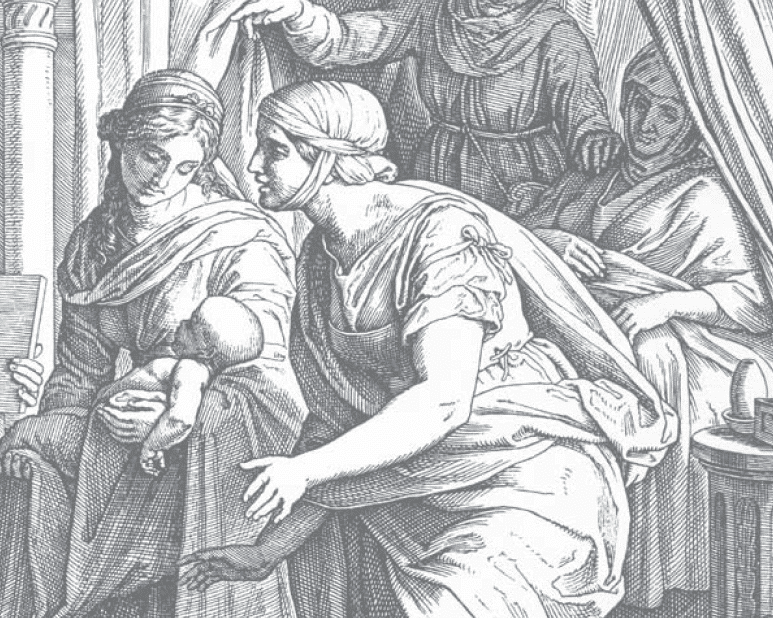 Abraham and Sarah also learned in the birth of their son that God is all powerful. Nothing is too hard for Him. Humanly speaking, there was no possible way that either one could have a child. Hebrews points out that Abraham was past the age of child bearing and Sarah was barren (Hebrews 11:11). Paul wrote that Abraham knew that his body was as good as dead and that Sarah’s womb was dead (Romans 4:19). Several times in the opening verses of Genesis 21 we are reminded that Abraham and Sarah bore Isaac in their old age (vv. 2, 5, and 7). Yet Isaac was born because the all-powerful God had so declared a year earlier (Genesis 17).

In addition, Abraham and Sarah learned that God is in no hurry to carry out His promises. They will come to fruition in His time—neither too early nor too late, but at the very time God had promised (v. 2). They were to simply trust in Him. God would work it all out; He would accomplish what He promised in His time.

In Romans 4:18–27, Paul used the birth of Isaac to define the nature of the Christian faith. By pointing out that Abraham and Sarah were as good as dead in their ability to produce offspring, Paul insisted that we look at ourselves. We are dead in our transgressions and sins. We have no more ability to produce spiritual life within ourselves than Abraham and Sarah were capable of producing physical life by themselves.

While many people today will acknowledge that they are sinners, they still believe they have enough good in them to be saved. They contend that in and of themselves they are able to make a response toward God for their salvation. All they need is a little help from God, and they will be saved. Like Sarah’s earlier suggestion to fulfill God’s promise through Hagar, people think they can fulfill God’s salvation on their own terms. The Bible teaches otherwise. We are told outright, “There is none that is righteous, not even one; there is no one who understands, no one who seeks God” (Romans 3:10, 11); “As for you, you were dead in your trespasses and sins” (Ephesians 2:1).

Scripture also gives us the example of Nicodemus. Nicodemus was one of the most pious people of his day. He was a believer, a teacher of the Law, a very upright and moral man. Even to him, Jesus said, “Unless you are born again, you cannot see the kingdom of God” (John 3:3). Even with all his good qualities, Nicodemus could not enter the kingdom of God on his own. He was dead in his sin. Paul writes of himself in the same way in Philippians 3 and then adds that he desires “the righteousness that comes from God and by faith” (Philippians 3:9). The simple truth is that we are so filled with sin and so in love with the darkness that we cannot respond to the gospel call under our own power.

Following up on that truth, Paul pointed out that Abraham knew that the power of Isaac’s birth was not his own but that the power came from God. Abraham believed God’s promise “being fully persuaded that God had the power to do what He had promised” (Romans 4:21). As long as Abraham possessed the physical ability to produce a child, he would have been able to take partial credit for giving life to that child. However, since he was long past the age of being able to produce a child, the glory and praise belonged to God alone.

Because we are dead in our trespasses and sins, we can in no way save ourselves under our own power. We are unable and have no desire to respond to the gospel message. Even has the Lord had to open the womb of Sarah, the Holy Spirit must quicken our hearts and makes us responsive to the glorious message of salvation through Christ. Only then will we experience the joy of new life in Christ. Only then will we be able to enter into the kingdom of heaven.

Just as Abraham had to understand that Isaac was a miracle child, so also, believers need to acknowledge that salvation comes through the power of God alone. “Not unto us, O Lord, not unto us but unto Your name be the glory, because of Your love and faithfulness” (Psalm 115:1).

1.    Why do you suppose so little is recorded concerning the long-anticipated birth of Isaac?

2.    What does the name “Isaac” mean and how is the name appropriate for this child?

3.    What is the difference between the laughter of Sarah in Genesis 21 and her laughter earlier in Genesis 18?

4.    What reason for joy did Abraham and Sarah have beyond the natural joy of no longer being childless?

5.    What can we come to know concerning the promises of God in this lesson?

7.    Why is the teaching of total depravity denied by many today?  Why is it important for us to understand and believe?

8.    In Romans 4:18-24 Paul uses the birth of Isaac to define the nature of the Christian faith. We are called to have faith like Abraham. What kind of faith is that?