Genesis 20 is considered by some commentaries to be a variation of Genesis 12. After all, there are several similarities. Abraham and Sarah moved to a different area where he was afraid of the ruler. They agreed to say that they were brother and sister instead of husband and wife. The ruler of the land took Sarah into his harem, only to be punished by God. The ruler then confronted Abraham with his deceit.

Yet there are also some differences that make this episode stand apart from the previous one. In Egypt, Abraham received gifts from Pharaoh before he knew of the deceit; in Gerar it was afterwards. In Egypt the ruler discovered the deceit through illness; in Gerar God spoke to directly to the ruler. In Egypt Abraham was deported; in Gerar he was welcomed.

It seems incredible that after Abraham is told that he is going to have a child with Sarah within the year (Genesis 18:10), that his faith falters once more, and he relies upon his own ingenuity to get through what he thinks is a difficult situation. Abraham ought to have learned his lesson from the incident twenty-five years earlier.

Yet, what people ought to do and what they actually do are often two entirely different things. That may well be the reason why this episode is recorded at this point in the Holy Scriptures. It becomes a deliberate parallel to the sad events that surround the lives of Lot and his daughters. All too often when we discuss disobedience we look at the Lots of the world. We follow their spiral downward as they sink farther and farther into their sin. Then we pat ourselves on the back as we point out their sad results. The Bible is too honest for that. Although it accurately shows the downward path of sin in those who deliberately will not follow God, it also shows the weak moments of those who do seek to follow after God. This episode involving Abraham makes plain that those who follow after God are not intrinsically better than unbelieving men and women.

In his journey of faith, God takes Abraham to the same spot where he had stumbled twenty-five years earlier. How would the patriarch fare this time? Would he trust God, or would he rely on his own cunning? A fear, not of God but of man, made Abraham tremble for his own life with no regard for that of his wife. As he entered a new area, he told the residents that Sarah was his sister. Abraham and Sarah imperiled the fulfillment of God’s covenant promise by repeating the mistake they had made twenty-five years earlier. The very promise of God was traded away for personal safety.

What would compel Abraham to do this again, especially with the promise so near to fulfillment? How could he cast away his confidence in God with such a cowardly lie? Apparently Abraham had not dealt with the sin in his own life. He had confessed it upon his return from Egypt (Genesis 13:1–3); he had been forgiven, but he had not reckoned with it. While he saw the peril his deceit caused, he did not mend his ways. Verse 13 makes clear that this was not just an occasional method used by Abraham and Sarah to avoid danger. This was the strategy they had devised each time they entered a new land. When in Egypt, he saw the danger of his deceit, but he did not turn away from doing it again. It is very easy to believe in God’s sovereignty and His promised care for us as Christians. What is difficult is to apply it to our everyday lives. How often we allow ourselves to fall into the same sin that had captured us in the past. We think that we would never be so foolish again, but we find ourselves caught in the same trap years later. When we truly see our sin for what it is (an affront to God), we begin to see it the way God sees it. God hates our sin, and we must hate our sin. Only then can we properly deal with it; only then can it be removed from us. No sin is ever properly dealt with until it is confessed and cleansed by the blood of Jesus Christ.

It may be considered strange that Sarah would have been found desirable by Abimelech. Although twenty-five years earlier she attracted Pharaoh because of her extraordinary beauty, she was now ninety years old. Traces of her beauty may have remained, but more likely Abimelech’s desire was to ally himself with the tremendously wealthy and influential shepherd king who had just settled near his kingdom.

God, however, protected Sarah. He struck Abimelech with some sort of illness; He closed the wombs of all those within Abimelech’s household, then came to Abimelech in a dream, saying, “You are as good as a dead man because of the woman you have taken.”

How long Sarah was in Abimelech’s harem we cannot know. We do know, however, that upon hearing the word of God, Abimelech obeyed promptly. He may not have known Jehovah, the covenant God, but he certainly feared the God who had appeared to him in a dream. 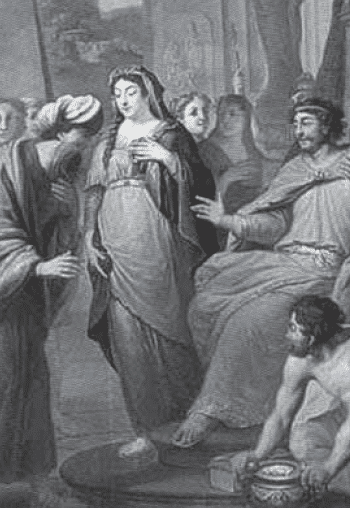 Upon hearing the Word of God, Abimelech pled his innocence. After all, he did not know that Sarah was the wife of Abraham. He had acted in innocence and with a clear conscience. In almost the same way that Abraham pled for Sodom, Abimelech pled for those within his camp. Certainly the God of justice would do what was right. Abimelech learned that God watched over His own people in spite of their lack of faith. Jehovah acts justly and demands obedience regardless of ignorance—on the part of Abraham or Abimelech.

Abraham had acted as the king of the land when he freed the people from captivity (Genesis 14); he acted as priest when he prayed for Sodom (Genesis 18); now God declared Abraham a prophet, as Abimelech was instructed to receive blessing from the patriarch. It is through Abraham’s prayer that Abimelech would save his own life and the lives of those within his household.

Having come to know the truth, Abimelech summoned Abraham and confronted him with his deceit. It is a sad testimony when a man of God must be rebuked by a man of the world. Yet, how often it happens. People within the church often become so deeply entangled with the affairs of the world that they need to be rebuked by an unbeliever. I have witnessed fellow Christians become so involved in a sporting event that the unbelieving referee had to charge the Christian school’s team with a technical foul. I have read in newspapers of one church suing another over a piece of property. Too often we can embarrass ourselves in front of the unbeliever, and as we do so we lose our Christian testimony.

More pathetic than being reprimanded by an unbeliever is the way Abraham tried to justify his actions. First, he came across as self-righteous when he stated there was no fear of God in the land (by anyone other than himself). Second, he told Abimelech that he was telling the truth, as Sarah was his half-sister. And finally, he reported to Abimelech that he had been doing this throughout the region ever since he had arrived in the land. How different was his response when confronted with his sin from the way Abimelech responded.

While all the statements Abraham made may have been true, his intention was to deceive. A lie consists not only in the actual words spoken, but also in motives behind those words. The motives of Abraham clearly illustrate that he had not grown very far in the faith in his thirty-year walk with God. What made his statements so wicked was that God had shown him twenty years earlier how wrong, unnecessary, and dangerous his strategy was. Had he learned nothing when he lost his wife to Pharaoh years earlier? In addition, Abraham and Sarah had just received strong assurances from Jehovah that the seed of the promise would soon be born to them. They should have believed that God would protect them and fulfill His word through them.

Abraham’s lack of faith could have destroyed everything as far as the promises were concerned. Yet how great is God’s mercy! Abraham’s lack of complete trust in God did not alter God’s plan one iota. Abraham may have had moments of doubt in God’s ability to care for him, but God’s ability did not waver or change. Abraham’s lapse of faith is similar to that of Peter, who dared walk on the water when called by Jesus to do so. Only when Abraham took his eyes of the Lord and looked at the circumstances around him did he, like Peter, sink into the waters around him. Just as Jesus did not forsake the disciple, but grabbed Peter’s hand, so God did not forsake Abraham when his faith was weak. Abraham may have doubted God’s grace, but God never failed to be gracious.

Abimelech returned Sarah and showered Abraham (whom he referred to as Sarah’s brother) with many gifts; he also gave permission to the patriarch to live wherever he desired. Although Abimelech was the more upright character in this incident, he still had to recognize Abraham as the one whom God had chosen as His prophet. The gifts were a clear demonstration to all who might look down on Sarah for her involvement in this incident. Abimelech admitted that he was entirely at fault, and Sarah was innocent of any wrongdoing.

In return, Abraham prayed to God, and God healed Abimelech’s family. The effectiveness of this prayer was not rooted in Abraham as a person, but on the function God had given to the patriarch as prophet. As promised, Abraham was a blessing to the nations around him. Abimelech was rewarded as his household was healed. After one simple prayer by Abraham, God opened the wombs of Abimelech’s wife and slave girls so that they could have children again. How ironic that the prophet in the land had been praying for years that he and his wife could have a child, yet remained childless. Yet it must have also been encouraging to them that the God whom they served had power to give and to take away barrenness.

1.    What are the similarities and differences between this passage and Genesis 12?

3.    What considerations should have moved them to realize their scheme was both dangerous and unnecessary?

4.    How did Abimelech respond to God’s threat against his life?

5.    Have you ever had a situation in which an unbeliever had to admonish or correct you?

6.    How does Abraham try to justify his actions?  Were his statements true?  Were they beneficial?

7.    Several times Abraham and Sarah apply situation ethics to excuse their sinful conduct. Note places where that may happen today.  How does II Corinthians 12:9 apply in such situations?

8.    How do the various promises that God gave to Abraham and Sarah come into play in this chapter?

9.    Where do you see evidence of God’s grace throughout this account?