Some time ago I was at an outdoor flea market in North Carolina. The sky was getting darker; thunder could be heard in the distance. Many of the shoppers, as well as the vendors, were beginning to pack up to leave. I was about to do the same when a particular item caught my eye. The price tag was kind of high. Thinking I had the weather on my side, I offered the vendor twenty dollars.

“Och, mon,” she said in an accent I could not identify. “I would be losing money for sure if I gave it to you for that!” She started putting things around the item in boxes, all the while muttering about how she had a family to feed. As I began to walk away, she said, “But I might be letting you have it for fifty dollars.”

Ah, the gauntlet had been thrown. I picked the item up, rolled it around in my hand, and said, “Twenty-five.”

“You’re breaking my heart!” she screeched. “I came down to $50 and you only went up five? I would sooner it fall to the ground and break in tiny pieces than give it to you for that!” Without skipping a beat in her tirade, she added, “Forty-five.”

I looked for a scratch, crack, or chip, in order to deflate the price more. “Will you take thirty?” I asked.

“Oh, and I suppose you want me to go to forty and then you’ll say thirty-five. Just give it to me now. But don’t you be telling anyone else or I’ll go out of business for sure.”

I love dickering at flea markets, garage sales, and the like. It is fun to see how low you can get the sales person to go. But can you imagine doing that with the almighty, sovereign God? Abraham did. God had set Abraham apart to be the father of His chosen race. Abraham would learn of God’s character throughout his life. That knowledge would be orally passed on to future generations until recorded by Moses. God had promised Abraham that all the land of Canaan would one day be his. God had made covenant with Abraham, treating Abraham as though he were already king of the Promised Land.

In the passage we consider in this lesson, God graciously took Abraham into His confidence regarding His concern for the cities of Sodom and Gomorrah. God treated Abraham, not as a servant, but as a friend (James 2:23). He took Abraham into His confidence so that Abraham could learn God’s intolerance of sin. Abraham must, in turn, direct his children so that they may walk in obedience and so that the Lord may bring about for the patriarch that which He had promised. Future generations must know that the judgment that falls upon the wicked is not by accident. It is the work of a God who hates sin. 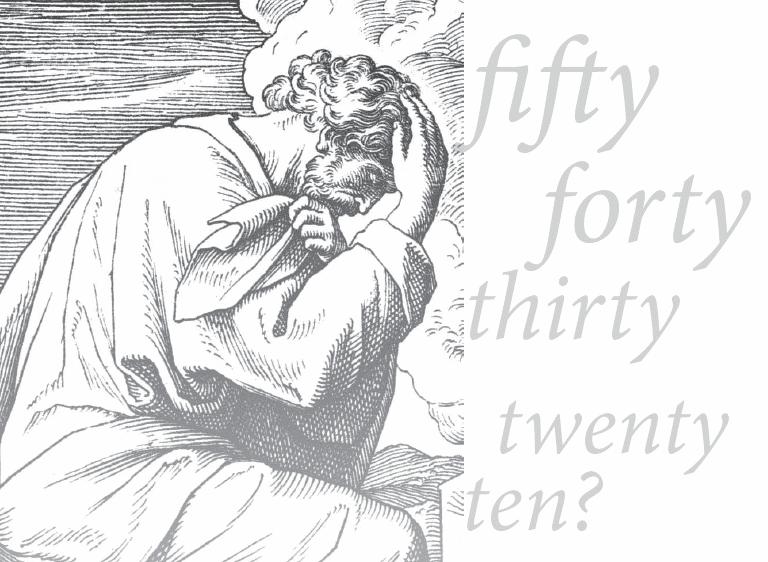 The created world longs for restoration and cries out to God for sin to be removed (Jeremiah 14:2; Romans 8:22). God told Abraham he had heard the outcry against the two wicked cities and sent His angels to determine the severity of their wickedness. By visiting the cities, the Lord illustrated to Abraham that He is not a God who is afar off. He does not act capriciously, but with justice. Although God had only said He was going to see if the wickedness was great enough to destroy the cities, Abraham concluded that it was in effect a “search-and-destroy” mission. If the outcry against the cities was so great as to reach the heavens, certainly it would have reached Mamre where Abraham lived.

Immediately Abraham began to cry out on behalf of the righteous people who lived within the city, fearing that God might indiscriminately destroy them along with the guilty. He knew God to be a righteous and holy God who would not tolerate the wickedness discovered in Sodom and Gomorrah. While God’s justice may demand that the wicked in the city be punished, would a just God also destroy the righteous within those cities along with the wicked? If the cities would be destroyed, causing the innocent to suffer, God’s justice would become suspect. On the other hand, if the cities would be spared, the guilty would escape the judgment that should rightly fall upon them.

Abraham’s faith had grown so far that he dared intercede on behalf of the righteous within the doomed cities of Sodom and Gomorrah. He boldly asked God to spare the entire city if fifty righteous people could be found within her walls. He ended by asking, “Will not the Judge of all the earth do what is right?” That this is a rhetorical question is made clear in Abraham’s statement, “Far be it from you to do such a thing” (v. 25). If Abraham questioned Jehovah’s righteousness in any way, he would never have interceded on behalf of the righteous within the cities. It was because he knew Jehovah to be a righteous God that he dared to implore Him on their behalf.

Abraham did not know everything about God, but he knew enough to know that God was a just God and that a just God would not punish righteous people. As Abraham pleads with God, the number of the righteous expected in the cities decreases from fifty all the way down to ten. Each time God answered Abraham, he seemed to dare to ask for a little more. Each time Abraham lowered the number, God responded with a quick, positive answer, almost daring Abraham to ask again. Abraham received a great lesson into the vast extent of God’s righteousness and God’s mercy.

Finally, Abraham was so bold as to ask, “What if only ten can be found there?” His intercession ended with ten. God responded that, for the sake of ten righteous, God would not destroy the city.

Why did Abraham stop at ten? Some would argue that ten is the minimal number of righteous people needed to have a leavening effect upon a city. That number later became the minimum number necessary to form a synagogue. Others contend that Abraham could not imagine that all within Lot’s family would not be among the righteous, or that Lot would have no influence upon any within the city. We can only speculate as to why the patriarch stopped at this number. Perhaps Abraham had learned that the number is unimportant and that God is merciful and will discriminate between the wicked and the righteous. The episode ended not with God failing to show mercy, but with Abraham not daring to ask any further. It is Abraham who stopped praying, not God who stopped giving.

Many people today make light of God’s justice. Strange as it may seem, if our rights are infringed upon, we are moved to wrath and demand satisfaction. Yet, when it comes to the rights of the most holy, supreme, sovereign Being, we do not take His rights seriously. We tell jokes about Saint Peter at the pearly gates and to whom he permits or denies entrance into heaven; we buy greeting cards that humorously depict hell and Satan. We maintain a bumper sticker theology that God loves everybody and He will punish nobody. But His justice will be satisfied!

Nor do many people take sin all that seriously. While the sin of Sodom and Gomorrah was indeed great, we must acknowledge that any sin, no matter how slight, is treason against God. James wrote that even the slightest infraction against God’s law makes us worthy of condemnation (James 2:10). We may understand the gravity of committing treason by participating in the overthrow our government, yet we fail to understand that every sin is seeking to overthrow the rule of God in our lives. With every sin against God we tell the King of kings that we would rather have ourselves on the throne than Him.

While we stand ready to condemn others for their sin, we have become accustomed to our own sin. Even worse, we have become accustomed to the mercy of God. God is never required to show mercy. His divine prerogative is, “I will be gracious to whom I will be gracious, and will show mercy on whom I show mercy” (Exodus 33:19). Not all receive it. If we remain in our sin, the Judge of all the earth will indeed to that which is right—He will punish us with eternal condemnation. But to those who call upon Him and trust Him, He grants mercy.

God poured out His wrath against sin upon His Son at Calvary. Those who cling to Jesus Christ’s once-for-all sacrifice are clothed in His righteousness. In the cross of Jesus Christ we witness justice in the real punishment for our sin, and we witness mercy because our sins are forgiven. Through Christ comes true righteousness and reconciliation with God.

1. Why did the Lord God want to visit Sodom and Gomorrah? Justify this answer in light of the omnipotence of God.

2.  Why would the great Creator of heaven and earth confide his plans with Abraham?

3.  Why did Abraham intercede with God for the welfare of Sodom and Gomorrah?

4.  What was Abraham’s line of reasoning for why the cities should not be destroyed?

5.  How does this passage teach both the justice and the mercy of God?

6.  How do we often take an improper view of sin?

7.  Are some sins more grievous or more serious in our eyes than others?  Are they in God’s eyes?

8.  Is the intercession of Abraham a concrete example of his being a blessing to the nations as God had promised?

9.  How is the pleading of Abraham on behalf of the cities a model for the way we are to pray for heathen cities and countries?