Most commentaries on Romans 13 delve into the question of why Paul would suddenly enter into a discussion on civil government. Several commentators believe the opening verses of this chapter reflect Paul’s desire to visit Rome and his personal experience with Roman officials up to the time of his writing this epistle. They argue that if Paul had penned this letter in later years, when the persecution of Christians became more pronounced, he may have written a more tempered view of government.

We should not, however, read a naïve optimism in Paul’s writing in which he assumes all is right with the world. Paul writes as a follower of Jesus Christ who was tortured and crucified by Roman authorities after their legal system had declared him innocent. Paul had earlier declared all people would bow before Jesus (Phil. 2:10). Certainly he would not expect slavish, unconditional obedience to human rulers.

In the first century, the newly established church was in a rather precarious position within the Roman Empire. The Jews were regarded as troublemakers, and followers of Jesus Christ were considered to be a subgroup of the Jews. The political climate was quickly changing in Rome. Nero had already been in power for three years when Paul wrote his letter to the church in that city. Nero’s perversity would soon be revealed to the world. Christians living in Rome may have already become alarmed by some of Nero’s hostile activities toward the Jews and Christians.

The exhortation that Paul gives to believers to submit to those placed in authority over them came to a fast-changing world for new believers. It followed fast on the heels of Paul’s teaching that Christians are to love their enemies and leave vengeance to God. The words of this chapter, then, were meant to be a general guide for all Christians throughout the ages. First, in verse 1, Paul gives the reason for submitting to authority in negative terms: “there is no authority except from God”; and then in positive terms: “the authorities that exist are appointed by God.”

The Role of Government

After God created the world, He filled it and gave purpose to each thing He created. He established certain institutions that would remain until the end of time—marriage, with Adam and Eve, and then, as they began to subdue the earth and fill it, government. When governments establish laws and promote justice, they honor God’s purpose for them. Paul does not enter into a discussion as to which form of government is best. Any form of government is better than anarchy and demands our support. Government, according to Paul, is a gift from God. God gives it to us as a necessity of life because of the presence of sin in the human race. It is to be held in esteem. God does not permit every individual to do what may seem right in his own eyes. Society is preserved from anarchy and ruin by the power the authorities receive from God. Because of this, Paul took a radical approach to government. Whereas the Jews were encouraged to remain separate and distinct from the culture around them, Paul urged believers to engage in public life and support the government as an institution established by God.

The role of the government is the prevention of anarchy and lawlessness. It should provide protection for those under its rule. To resist such powers would bring about rightful punishment from those who are ordained by God to keep law and order. This does not necessarily mean that the methods by which they have gained their positions are matters of indifference to God. For us, obedience to those in authority over us is required as long as they stay within the position God has placed them.

The Christian need not live in fear of the government. And yet we often do. That is made clear in a very simple way: when you drive down the road and a police car comes into view, do you automatically slow down? I know I do. The sanctification process has not yet reached my right foot. Even when I know I am going the speed limit, if I see a police car I automatically take my foot off the gas pedal and check my speed. Even if I have the cruise control set at the speed limit, I step on the brakes to slow down. One minister friend tells me he has an “automatic reflex” of putting a Bible on his dashboard when he sees a policeman just in case he gets pulled over.

Yet those who do what is right have nothing to fear. The government will praise those who do good and encourage them to continue in their exemplary conduct. Christians should be the first in line to receive such accolades as they strive to live a godly life. We should appreciate the blessings of a well-ordered society and support the government, praying that the Lord will guide rulers to govern properly. Government is not an evil to be endured, but a blessing from God.

The Old Testament prophets often cried out to God when Israel failed to carry out the justice that was required of her. Frequently they warned the kings of Israel that God would punish them when they did not provide for the widow or the orphan. God would do the same to them as he did to the pagan nations that disobeyed him if they failed to exercise justice in the land. When the people did what was right in their own eyes, God would march in enemy troops who would enslave the Israelites.

While Paul does not give any exceptions to the general rule of civil obedience, there are times when governments fail to perform the purpose for which they were ordained. Governments may even command their citizens to do things God forbids or pass laws disallowing citizens from doing that which is commanded by God.

Peter and John faced such a government when they were told they were no longer permitted to speak the name of Jesus. They replied, “Whether it is right in the sight of God to listen to you more than to God, you judge” (Acts 4:19). There will be times when Caesar conflicts with Christ, demanding that he be worshiped rather than the one true God. Then Christians must disobey as did Shadrach, Meshach, and Abednego, who refused to bow before the image the king had built (Daniel 3). In both the Old and the New Testament examples of civil disobedience, those involved did not speak ill of the government. In addition, while they obeyed God in their civil disobedience, they were willing to face the penalties for disobeying the government. 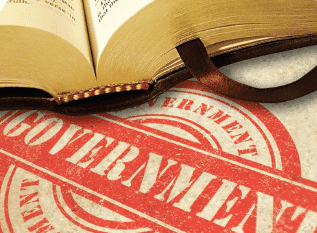 The sword was meant to be a symbol of authority. Since the common method of inflicting capital punishment was decapitation by means of the sword, those bearing the sword had the right to carry out the sentence of life and death. The government’s misuse of or refusal to use the sword are both contrary to the will of God. The one leads to tyranny; the other to anarchy. Neither provide the good protection that God intends.

Often, because of corruption within government, Christians are tempted to neglect their duties to the state. Paul, who lived during the era of the tyrannical Roman government, called on his readers to support those in authority over them by paying taxes and revenue. He goes beyond that by telling Christians that our debt to government includes showing respect to those who hold the power of life and death in their hands and honoring those who are in position of leadership.

As followers of the Prince of Peace, we should never resort to violence as a means for overthrowing a government. Such behavior contradicts our Savior’s basic message of love for one another—including our enemies. Earthly authorities may, at times, behave poorly. We are to trust that even when they do, our heavenly King will use them to accomplish His purposes. We are to uphold them in prayer and ask God to lead them in a way that brings glory to His name. Rev. Wybren Oord is the co-pastor of Trinity United Reformed Church in Lethbridge, AB, and the editor of The Outlook.