Paul opens this chapter carefully, explaining that God is faithful to His promises, using the offspring of the patriarchs as examples. Isaac and Jacob illustrate the blessings God has given to those He has chosen as His own; Ishmael and Esau show that God did not include all of Abraham’s seed in the covenant promises. The Jews never questioned God’s fairness when He first called them to be His people and excluded Gentiles from the promises. However, when Paul wrote that the Jews were not necessarily the children of God and that Gentiles were included in the promises, they accused God of injustice.

Quoting Exodus 33:19 (“I will have mercy on whom I will have mercy, and I will have compassion on whom I will have compassion”), Paul is quick to point out that the sovereign God is not under any obligation to show mercy to anyone. All have sinned. All have fallen short of keeping God’s perfect law. As Paul pointed out earlier, “There is no one righteous, not even one” (Romans 3:10). God would not be treating any sinner in an unjust manner by giving him his due wages for sin: death. God is forever righteous in all His dealings with the human race.

If God does show mercy, that, too, is in keeping with His righteousness. Mercy and grace are a gift. A giver has every right to give a gift to whomever he pleases and to withhold a gift from whomever he chooses. Likewise, it is God’s decision whether He chooses to show mercy to some and withhold it from others. Paul clearly states that God’s election does not depend upon man’s desire or effort, but upon God’s mercy. For Him to provide salvation to anyone within the fallen race is totally reliant upon His sovereign grace.

Some who dare to claim God is unjust point to Exodus, where Moses records, “But the Lord hardened Pharaoh’s heart” (9:12; 10:20, 27). They ask, “How can a loving God purposely harden someone’s heart?” Those who make such accusations fail to read the entire account of the ten plagues. There we find that Pharaoh hardened his own heart after witnessing the power of God in several plagues (Exodus 8:19, 32; 9:7, 35).

Pharaoh had dedicated himself to the evil purpose of opposing God’s salvation plan for Jacob’s descendants. God did not make Pharaoh sinful. God does not compel anyone to sin, nor does He entice or encourage anyone to sin (James 1:13–16). God simply did not bestow His grace upon Pharaoh, and He was completely righteous in withholding His grace. He does not owe grace to anyone—not even Pharaoh. In the hardening of Pharaoh’s heart, God allowed him to remain in his evil and suffer the consequences.

God hardens the hearts of those who have hardened their hearts against Him. In this, God does nothing unrighteous. He simply gives them up to their own evil desires (Romans 1:18–32). God does this, not because Pharaoh—among others—is worse than the rest of the human race in his depravity, but because God will have mercy on whom He will have mercy. And yet, as with Pharaoh, God turns the evil of the wicked into displays of His own sovereign goodness as He demonstrates His power to triumph over evil.

Like Job, we must remember who we are and who God is. Job challenged God’s right to inflict calamity upon him. God responded, not by answering Job’s questions but by pointing out His sovereignty and man’s insignificance. Paul presents a similar argument, using the analogy of the potter and the clay. It is the potter’s right to use the same lump of clay to make something beautiful that will decorate a home, and use part of the same lump of clay to make a garbage can or an ashtray. Does the clay have the ability or the right to argue with the potter? Can the ashtray argue with the potter that it deserves to be a beautiful urn? Of course not! And so it is with the human race in reference to our Creator. As the one who has made all things (including us), Jehovah has the right to do with His creation as He pleases. That is His prerogative as Creator. God does not have to answer for His actions to the humans He created any more than He has to answer to an ashtray. When a mere human being questions God’s right to act according to His will, he seeks to place God in a box and exalt himself. Who do we, the created ones, think we are that we can do that? If mankind ever had any rights to begin with, we gave them up in the garden of Eden when our first parents rebelled against God. Anything other than our immediate death is mercy. God asks Job, “Would you discredit my justice? Would you condemn me to justify yourself?” (40:8).

If Pharaoh had released Israel the first time Moses requested, who would have known about God’s mercy toward Israel? God endured the ten plagues with patience so that His glory would be revealed. Events in history take place not only for the salvation of some and the punishment of others, but also for the glory and honor of God. Years later, when the spies entered Jericho, Rahab told them,

I know that the Lord has given this land to you and that a great fear of you has fallen on us, so that all who live in this country are melting in fear because of you. We have heard how the Lord dried up the water of the Red Sea for you when you came out of Egypt, and what you did to Sihon and Og, the two kings of the Amorites east of the Jordan, whom you completely destroyed. When we heard of it, our hearts melted and everyone’s courage failed because of you, for the Lord your God is God in heaven above and on the earth below (Joshua 2:9–12).

God does not deal with the wicked with undue harshness. On the contrary, He is patient with them beyond our understanding. In the end, however, their punishment is just and designed to glorify God. His displeasure of sin is revealed through their punishment. God said to Pharaoh, through Moses, “For by now I could have stretched out my hand and struck you and your people with a plague that would have wiped you off the earth. But I have raised you up for this very purpose, that I might show you my power and that my name might be proclaimed in all the earth” (Exodus 9:15–17).

God is a God of love. Love automatically defends those who persecute, ridicule, or malign the object of affection. Husbands will defend their brides, parents their children, and patriots their countries when they witness the objects of their love being scorned or harmed in any way. So also God defends the object of His love—the church.

After explaining the sovereignty of God as displayed through Pharaoh, a Gentile, Paul turns his attention to the Jews. Twice he quotes from the prophet Hosea. The Gentiles had rejected God and were outside of the covenant. All of Israel had done the same. Yet in His mercy, God would declare both Jew and Gentile His people and sons of the living God.

God had given Hosea very specific instructions regarding the names of his three children.

Jezreel means “scattered.” “Call him Jezreel, because I will soon punish the house of Jehu for the massacre at Jezreel, and I will put an end to the kingdom of Israel” (Hosea 1:4). This prophecy was fulfilled almost immediately—six years later when Israel fell to Assyria.

Lo-Ruhamah means “not loved” or “not pitied.” “Call her Lo-Ruhamah, for I will no longer show love to the house of Israel, that I should at all forgive them” (Hosea 1:6). During the exile the Jews were scattered among the Gentiles. God showed them no special favor while they were in exile. They intermarried and within a generation were no longer “true” Israelites.

Lo-Ammi means “not my people.” “Then the Lord said, ‘Call him Lo-Ammi, for you are not my people, and I am not your God’” (Hosea 1:9). A time would come when the Jews as a nation would no longer be special in God’s eyes. In 586 BC, Nebuchadnezzar defeated Judah and carried many of them into captivity. 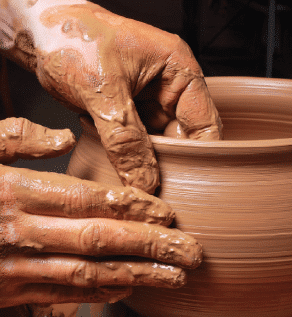 The two clay vessels of God, Israel and Judah, failed to heed the continued warnings of God’s prophets and suffered the consequences. They were scattered; they were not pitied; and they were no longer a people set apart by God. Failing to trust God, the Old Testament “people of God” made alliances with other nations. Failing to believe God, the New Testament “people of God” cried for the blood of Jesus to be upon them and upon their children. Only a few decades later, Jerusalem was destroyed, and all the people were once again scattered.

Paul uses the prophecy of Hosea to point out that even as the Gentiles have no right to demand God’s grace, neither do the descendants of Abraham. They abandoned the promise of God and were led into captivity. For God to restore a remnant to the land was an act of His grace. No longer are the Jews a separate nation. No longer are the Gentiles excluded from the promises. Those who have been scattered will be called together and become planted. Those who are not loved will be loved; those who are not God’s people will be called sons of God. “Great will be the day of Jezreel”—the scattered ones (Hosea 1:11).

Quoting from Isaiah, Paul points out that although the Israelites may be great in number, only a few of them would be saved. After decades of exile, only a remnant returned to the Promised Land. Once there, they rejected the Messiah and continued to try to please God by keeping the law. When Jesus exposed their hypocrisy, they stumbled over His teachings and crucified Him.

It is only because of God’s grace that Israel did not become like Sodom and Gomorrah. Israel had been called to be a light to the nations around them. Instead, they followed the practices of their neighbors and plunged themselves into darkness. Israel’s hearts were hard as they pursued an unattainable righteousness through the law. What Israel failed to do the Son of God accomplished when He, the true light, became a human being and paid the debt of those who sought a righteousness that was not their own.

Today, there remains only a remnant of the entire nation of Israel that understands the law was given to drive them to the Savior that God provided. Although they are scattered throughout the world, they, along with all believers, will be called the true sons of God. They have been freed from the law and give thanksgiving to God for His grace.

The history of Israel should have been proof to the Israelites that not everyone born an Israelite automatically inherits God’s promises. God had chosen them as His instruments and would deal with them according to His purposes. In His sovereignty, God is free to show mercy upon whomever He will show mercy—Jew and Gentile alike.

1. Is God fair in His electing some while leaving others in condemnation?

4. What did God endure with much patience in verse 22?

5. How does the illustration of the potter and the clay instruct us?

6. Why does God allow for people to fall?

8. How does the idea of a remnant speak to both the justice and grace of God?

9. Is it proper to say that you are proud to be one of God’s chosen people? Why or why not?