Years ago I wrote a sermon entitled “Jesus the Slave Owner.” While the sermon was well received, people were appalled by the title. We like our independence; we like our freedom. While we freely confess that our only comfort in life and death is that we belong, body and soul, to our faithful Savior Jesus Christ, we refuse to be slaves to anyone.

While the concept of slavery may be somewhat foreign to us, it was not so to the original readers of Paul’s epistles. Today we abhor slavery because of the atrocities that took place in the southern states. The kind of slavery that we are familiar with is similar to that in Rome where the army would capture an enemy, transport him to Rome, and then sell him on the auction block. Such slaves were considered chattel and were often horribly mistreated. 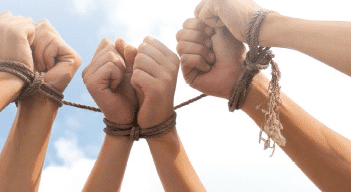 An older, more common type of slavery was that of voluntary indenture. Those who were very poor would offer themselves up as slaves to someone who, in turn, would provide them with food and housing. People would willingly accept the role of slavery to have someone provide for their basic needs. The Bible repeatedly gives instruction as to how slaves are to be properly treated and, after six years in service, released from their bondage.

There were times when those who were slaves knew they had it pretty good. They had clothes on their backs, food on their tables, and a place to call home where they could raise a family. When their term expired, all of those things would disappear. At that time, a slave could volunteer to remain with his master. If the master agreed, he would pierce the earlobe of the slave. Either the piercing would leave a permanent scar or some type of earring would be placed in the ear indicating that the former slave wanted to belong to this particular master his whole life long.

The Roman Empire was heavily dependent on slaves to provide hard labor and perform menial tasks. Approximately one-third of Rome’s population consisted of slaves. Even as Pharaoh feared the ever increasing number of Israelites living in Goshen (Exodus 1:10), so also the Romans citizens feared a rebellion if the slave population came to realize their numeric strength. In addition to the slaves, there were many free men in Rome who had once been slaves. Some commentaries propose that well over half the church in Rome consisted of slaves. Indeed, then, every member in that church was keenly aware of what slavery was all about and keenly aware of what Paul was writing about in this chapter.

Even though we may consider slavery to be far removed from us, it is much closer than we think. Many people are slaves and don’t even know it! To others it is very clear that they are slaves to alcohol, tobacco, pornography, or some other vice. Others are slaves to their jobs or their possessions. The simple truth is that we are all slaves to whatever it is that dominates our lives. We are either slaves to sin, which leads to death; or slaves to obedience, which leads to righteousness. You either serve the devil or you serve Jesus Christ. Jesus said, “No man can serve two masters; for either he will hate the one and love the other, or he will be devoted to one and despise the other” (Matt. 6:24). While we would not want to disagree with the words of Jesus, we may find this a difficult illustration to understand. After all, an individual is certainly capable of holding down two jobs in a satisfactory manner. As long as he works the allotted hours and completes the tasks assigned to him, no employer should complain.

What Jesus refers to here, however, and what Paul picks up on in Romans 6, is the master-slave relationship. This is much more than an employer-employee relationship; this is the relationship the slave has with his master. By definition a master has total control over his slave. The slave is owned and completely controlled by his master. It is not only difficult but it is also impossible to serve two masters faithfully and to be equally and wholly devoted to both. Sooner or later, life will boil down to loving one master while hating the other. Spiritually speaking, we are slaves to one of two masters:

1. We are slaves to sin. In the opening chapters of Romans, Paul has described for us the horrible state into which we are born. We are born into bondage to sin through Adam. Many people view this bondage as freedom. Once free from religion, they think they can do all the things that they were once prohibited by the “do’s” and “don’ts” of the Ten Commandments. This was the type of “freedom” that the Serpent offered Eve in the garden of Eden. He argued that Eve should not be bound by the words of God. Instead, he suggested she and her husband eat from the forbidden tree so that they could be free to discern for themselves that which was good and that which was evil. Ever since the fall, the human race has wanted the freedom to discern for ourselves right from wrong (see Isa. 5:20–24). Paul rightly asks what benefit those in bondage to sin reap. He points out three aspects that the “wages” of their sin produces. First of all, sin creates a downward spiral in a person’s life that will lead to increasing wickedness (v. 19). The innocent first glance becomes the prolonged look that leads to addiction. After that come the guilt and the shame that wreak their heavy toll on the body. Finally, the end result of the “freedom” offered by Satan and sin is death. What a hopeless slavery!

2. We are slaves to righteousness. Thanks be to God that Christ has delivered us from the power of the devil! To be redeemed by God through Christ means that we have been bought out of our miserable slavery to sin and brought into righteousness. God has made us His possession. It cost Him His Son. Through His death and resurrection, Christ has laid claim on our lives. He is our new Master, and we have become His servants. In other words, instead of being slaves to the devil, we have been made slaves to Christ. There are many who will say that Christ is a much harder taskmaster than Satan. After all, the devil comes with all kinds of alluring promises, entices us with all kinds of worldly goods, and lets us do all kinds of things. Christ, on the other hand, has rules to follow and expects followers to keep themselves unspotted from the world. Moreover, we are to walk the narrow path. Jesus spoke of oppression, self-denial, sacrifices, and persecution.

The devil can make sin look delightful and enjoyable before we yield to temptation. Once we have committed the sinful act he drags us into, however, the miserable consequences will attack us without mercy. There are very few high school students who start drinking with the intention of becoming alcoholics. Very few people enter a casino intending to refinance their homes to feed their gambling addictions. Very few brides walk down the aisle thinking, “In ten years, I’m going to dump this bum.” Serving the devil will bring you there! Serving Christ, on the other hand, fills a person’s life with lasting joy and is always rewarding. It is an act of liberty and love.

Choose You This Day Whom You Will Serve

Paul asked the church in Galatia the following question: “Now that you know God—or rather are known by God—how is it that you are turning back to those weak and miserable principles? Do you wish to be enslaved by them all over again?” (Gal. 4:9). Paul saw the difference between the two masters. One master, the devil, leads to eternal death. The other Master, Jesus, leads to eternal life. How absolutely incredible is the grace of God. While we were in bondage to Satan, God sent His Son into this world to die for the sins of His people. Through the Holy Spirit, God calls us to be His people—to be the very ones for whom His Son paid the penalty for sin. It is not because we in any way have merited His kindness; it is sheer grace.

We must run, as a people freed from bondage, to Christ to have our ears pierced by Him. As we become His slaves, we discover that while we must serve God, being a slave to righteousness is fills us with the desire to serve Him. No longer does the believer view the Law as something that we are under obligation to fulfill as duty. Rather it has become the means by which we express our thanksgiving to God for the grace He has shown. Thereby we not only acknowledge Jesus Christ as our Savior but we also readily receive Him as the Lord of our lives. Serving Him becomes our focus and our joy. Interestingly, it is only by being a slave to Christ that we truly become free. Joyfully serving Him leads to love, righteousness, and the free gift of eternal life. “If the Son sets you free, you will be free indeed” (John 8:36).

1. What images come to your mind when you think about slavery?

2. How is the image of slavery appropriate for our relationship either to sin or to righteousness?

3. What happens when we are slaves to sin?

4. What happens when we are slaves to righteousness?

5. How do you react to the Christian as a slave?

6. How can someone possibly be happy being a slave to anything or anyone?

7. How would you describe the differences between being obligated to keep God’s law, keeping the law to earn God’s favor, and doing good in thanksgiving to God?

8. What is the significance in the words wages and gift in verse 23?