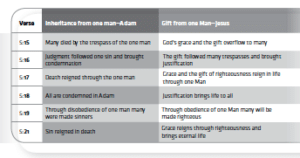 The English Puritan Thomas Goodwin wrote, “In God’s sight there are two men—Adam and Jesus Christ—and these two men have all the other men hanging at their girdle strings.” Paul concludes the last half of Romans 5 by contrasting Adam and Jesus. As he does so, he conveys these important truths to his readers:

2. Adam’s original sin is imputed to the entire race.

3. One act of righteousness, done by one Man, brings life to all.

4. Jesus’ righteousness is imputed to all who believe.

Death is not a good thing. Today in our society there is an increasing effort to promote death by means of abortion, euthanasia, and mercy killing. Death is described as a release from pain and suffering, a removal of all the ravages of disease inflicted on the body. Death, however, is not merely the physical release from the cares of human existence. It is the eternal separation from God’s fellowship and the eternal misery that comes from that separation. It is the penalty inflicted by a righteous God on those who have sinned against Him. No wonder Jesus said, “I tell you, my friends, do not be afraid of those who kill the body and after that can do no more. But I will show you whom you should fear: Fear him who, after the killing of the body, has power to throw you into hell. Yes, I tell you, fear him” (Luke 12:4–5).

When God placed Adam in the garden of Eden, He told Adam that there was one tree from which he was not permitted to eat—the Tree of the Knowledge of Good and Evil. God even told Adam why he was not permitted to eat from that tree: “for when you eat of it you will surely die” (Genesis 2:17b). Adam, with a nature unpolluted by sin, had the freedom to choose between obedience to God’s Word or disobedience. His decision would have far-reaching consequences. Paul would later point out that Adam’s sin affected all creation (Romans 8:19–22). His focus in chapter 5:12–21, however, teaches the universal destruction Adam’s sin brought on those created in God’s image. When Adam disobeyed and ate from the tree, he earned for himself and his posterity exactly as God had warned—death.

The sin of Adam was the ground on which all the human race was condemned. As our representative head, Adam plunged our entire race into a totally depraved state where we hate God, hate His law, and have no desire to be reconciled to God. The concept of Adam as our representative head should not be foreign to many readers of The Outlook. Many of our readers are immigrants or children of immigrants. In the 1950s my father was given the option of emigrating from the Netherlands to either the United States or South Africa. He chose the USA. As the representative head of the family, his decision affected all of his children. We grew up in the United States. Our children were born in the United States. Unless one of the descendants of my parents deliberately chooses to move to another country, all of them will be born in the United States. Likewise, Adam was given a free will by which he could decide to heed the warning of God and not eat from the forbidden tree, or he could reject the word of God and disobey Him. Once he fell into sin, once he was banished from the garden, all of his descendants would be born outside of the garden, outside of the perfect state in which Adam and Eve were created.

A recent newspaper article reports that 64% of all high school children surveyed have cheated on a test; one out of three has stolen something from a store; and 83% have lied to their parents about something significant. In spite of these numbers, the survey headline reported that humanistic educators agree that teenagers are basically good kids. It is not their fault, they argued; it is the academic pressures that lead our teens astray. The goal of education, they say, is to bring the inborn goodness out of our children so that they can be good adults. The trouble is that they, as all children of Adam, have no inborn goodness.

While Genesis 1:27 makes clear that Adam was created in the image of God, the Bible makes clear that Adam’s children followed in the image of their father. “When God created man, He made him in the likeness of God . . . When Adam lived 130 years, he had a son in his own likeness” (Genesis 5:1, 3). While Adam was created in the image of God, Seth and all the other children of Adam were in his image. That image was a sinful, polluted image. A corrupt stock produced a corrupt offspring. That corruption was passed on from generation to generation.

Sin, along with its punishment—death, came into the human race through Adam and spread to the entire race. His act of rebellion against God was imputed to all. When he transgressed the law of God, his transgression was imputed to the entire race. Every human being receives the same punishment for sin through the original sin of Adam. Each and every one of us inherited our sinful condition from Adam. We are sinners not because we sin; we sin because we are sinners.

As if original sin were not enough to condemn us, we add to our representative’s original sin by adding sins of our own. We know from the law of God that we are guilty of committing innumerable sins against God. While we are conceived and born in sin, we increase our guilt every day by the actual sins we commit.

Obviously, sin was already present before the law was given. Paul points out that since death was present before Moses received the law, sin had to be present, as well. The law that God gave to Moses did not introduce sin; it made sin more visible. There could be no punishment if there were no guilt. Alienation from God began already in the garden of Eden when Adam and Eve tried to hide from God. They had knowledge of what was good and what was evil. The law given to Moses made us aware of how much we are alienated from God and the depth of our rebellion against Him.

Through the law we are made aware of our inability to do the will of God. By doing so, the law should also make us aware of the fact that we cannot save ourselves but must look for our salvation outside of ourselves. We need a Savior. Against such a backdrop of sin, the brilliance of God’s salvation plan shines all the more brightly. Jesus Christ, the second Adam, met all the requirements of the law. He was holy by nature, not contaminated by original sin, and He obeyed all the precepts of the law. He was thus qualified to pay the penalty for sin against the human race.

Just as our first parents became the means by which sin and death came into the human race, so also Jesus Christ is the means by which grace and life were poured out on all who are truly in Him. The propriety of salvation by the second Adam lies in the fact that we were lost through the first Adam. The principle of a federal head worked disaster on us in Adam. In Christ, however, it causes an abundance of blessings.

By the grace of God the righteousness of the second Adam, Jesus Christ, is imputed to all who believe that the death of Jesus was the punishment for their sin. Adam brought us under condemnation and death; Jesus brings us under justification and life. Instead of a forbidden tree that brought us death, there was a cursed cross on which the Son of God died. When Jesus rose from the dead for our justification, death was defeated. Paul can rejoice as he writes, “O death, where is your victory? O death, where is your sting? The sting of death is sin, and the power of sin is the law; but thanks be to God, He gives us the victory through our Lord Jesus Christ” (1 Corinthians 15:55–57).

Those who confess Jesus as their Savior and Lord receive the complete remission of all their sins, and they have imputed to them the obedience and righteousness of Jesus, as if it were their own. They are cut off from the dead tree (Adam) and grafted into the living vine (Jesus Christ). He has become the representative head of all who believe.

This does not mean, however, that the entire human race is saved. Nor does it mean that the entire human race has the opportunity to be saved. All those in Adam are part of the human race. They are all condemned through their federal head, Adam. All those who are in Christ—that is, all who believe in His once-for-all sacrifice on the cross—are saved by His blood and have His righteousness imputed to them. All people live under the kingship of one of these two representative—Adam or Christ. Either they live under the dominion of death or they live in the kingdom of life. Without Christ, people remain in the deadly line of Adam, sowing seeds of corruption. In Christ, people are brought into life and made able to bear fruit that brings glory to God.

Many people accuse God of not being fair to the human race by making us all guilty of original sin. How can one man who lived so long ago be responsible for the entire race’s sinful state? Ironically, those very same people remain silent when it comes to being undeservedly clothed in the righteousness of the second Adam, Jesus Christ. The concept and the principle are one and the same—through Adam we die; through Jesus we live.

Jesus is more than a match for sin. The triumph of sin over the human race was through the disobedience and trespass of Adam. So also, the triumph of grace is through the obedience and righteousness of Jesus Christ. By nature we are all under the first Adam. By nature we are all under the condemnation of death. Thanks be to God that in His grace He has provided a second Adam. Those who are joined to Him in faith have abundant life given to them!

1. Using the chart, what similarities and differences do you see between Adam and Christ?

3. Is it fair that the act of one person (Adam) should bring condemnation to the entire race?

4. Does the idea of Adam as our federal head obscure personal responsibility?

5. What is the difference between original sin and actual sin?

6. What is meant by “sin is not counted where there is no law” (v. 13)? Does this mean that as long as there was no law there was no sin? How do we know what sin is?

7. Is it fair that many can benefit through the act of one person (Christ)?

9. How does grace abound over sin?