Paul begins his letter by creating a bond between himself and the believers in Rome. He praises God for them. That praise comes not because they have sent a large donation to his ministry nor because they have built a huge mega-church. He praises God for their faith. Paul does not proclaim the gospel in order to gain esteem for himself or to climb up the ecclesiastical ladder. Notice all the verbs in this small portion of his letter: “I thank,” “I serve,” “I remember,” “I pray,” “I long.” All of them focus on Paul’s service to God and his desire for those who hear his message. As one who proclaims the good news of Jesus Christ, his desire for his readers is for them to understand God’s glorious plan of salvation so that they might increase in their faith.

Paul knew both the joy of Christ and the yoke of Christ. As a scholar of the Old Testament, he had longed for its fulfillment. He had seen the vision of the Messiah on the way to Damascus. The Holy Spirit had led him to an understanding of how the Old Testament pointed directly to Jesus of Nazareth as the Messiah. How frustrating it must have been when he tried to convince his fellow Old Testament scholars that the Word had been fulfilled, only to be met by rejection. Contending for the gospel was not easy. Paul knew well the trials fellow believers would face, including the Christians in Rome.

To be a Christian in the capital city was very challenging, to say the least. Most religions were tolerated as long as one acknowledged Caesar as Lord. Christians refused, instead declaring Jesus as the one true Lord. Jews who converted to Christianity were often kicked out of their homes and disowned by their families. For them to claim their hope rested in Jesus Christ alone was a bold act of faith. If any institution was in need of encouragement it was the Christian church in Rome.

That there was a group of believers in the capital city was most remarkable. It was being reported all over the world, in other countries and other cities by those who were interested—that is, to other Christians. If a church could survive in such a decadent city, surely it could survive in other places, as well. The church would survive because it was not the work of man but the work of God.

Paul was convinced that spending time with these Christians would result in great spiritual growth for them and personal encouragement for him. How ironic that the very place that Paul was so passionate to visit became his last stop before he entered the eternal city. A few years later, he would arrive in the city in chains and be martyred.

In the few verses that introduce his letter, Paul becomes very personal. He explains the reason why he is writing them and the desire of every minister of the Word. It is his desire is to preach the glorious good news of the gospel so that the congregation may increase in the knowledge and faith of Jesus Christ.

Paul’s focus on faith in his introduction points to the purpose the rest of Romans. Binding himself to the church by extolling their faith opens the way for him to explain how rich and full true faith in Christ can be.

There are many people today who claim to have a faith in Jesus Christ when in reality they do not. While they have faith in some aspect of Jesus Christ, they do not have a saving faith.

Two funerals I attended recently brought this home to me. Although totally different from one another, they were very much the same. One offered a comfort rooted in the good works of the deceased; the other offered no comfort due to a lack of any authoritative testimony. While on the one hand, salvation was assured based on subjective religious feelings, on the other hand it was denied because there was no experiential conversion.

This type of substandard faith is proclaimed not only in different cults and sects; it can be found in Reformed circles, as well. I have met elders who deny the resurrection of Christ and Christian high school science teachers who refuse to accept the future resurrection of the body. I have read of college professors who deny a historic Adam and Eve and ministers who boast that their faith is made stronger because it is filled with doubt. All of them claim to be Christians. In fact, all of them claim to be Reformed. On what is their faith based? On that which is seen or on the absolute and unfailing truth of God’s Word (Hebrews 11:1)? The Heidelberg Catechism is very clear in delineating what a Christian must believe as it lists the twelve articles of our undoubted Christian faith (Lord’s Day 7, Q/A 22, 23).

One renowned Reformed minister followed the teachings of Norman Vincent Peale and extolled the power of positive thinking. His megachurch grew to great fame as he made people feel good about themselves. Once he announced that he was going to do a series of sermons on the book of Romans. I thought at last he would have to mention sin—actually say the word. To my dismay, he spoke of “mistakes,” “bad choices,” and “guilt feelings.” This type of preaching leads one to have more of a faith in self than in Christ. It is certainly not a confession of one’s total depravity and great need for a Savior. 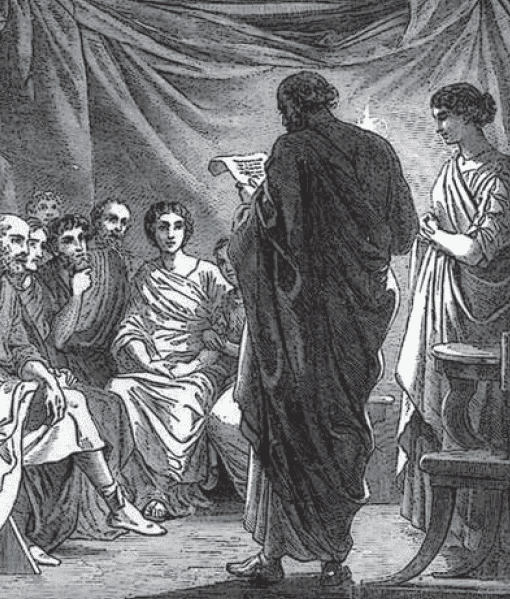 Several years ago I was introduced to jail ministry by a man who strongly believed in the words of Paul to the Philippian jailer, “Believe in the Lord Jesus Christ and you will be saved” (Acts 16:31). He would ask an inmate if he wanted to be saved. When the inmate said “Yes” the elderly man would explain that all he had to do was believe in the Lord Jesus Christ and he would be saved. Then he would ask, “Do you believe in Jesus?” When the positive response came, he would declare the inmate as saved.

It appears that lot of people do truly believe that Jesus will take them to heaven. That is, they trust the statement that Paul made concerning belief in Jesus Christ for salvation, but they really do not believe in Jesus. They believe the statement. They have no idea who Jesus is or what He accomplished at Calvary in order to acquire salvation for the elect. Too often in our efforts to spread the gospel we offer something far less than Jesus Christ Himself. What we offer is not the atoning sacrifice of Jesus Christ and His imputed righteousness, but a statement made about Jesus Christ. We isolate a promise and offer that to the unbeliever, ignoring completely the power of God behind that promise. Faith must be more than a simple, “You gotta believe.” We must explain the contents of a genuine faith so that we may have a genuine hope and trust in the saving work of Christ.

It is a genuine faith found in the churches in Rome that leads Paul to bring praise to God. A genuine faith acknowledges that we have rebelled against God and grievously sinned against His commandments. Because of our sin we are worthy of eternal condemnation. True faith acknowledges that we are still inclined toward all evil. In addition, faith believes that God declares us innocent because His Son paid for our sins and that God has imputes the righteousness of His Son to all who believe in His once-for-all sacrifice on the cross.

We are not called to trust in a promise; we are called to trust in the God-sent Messiah, Jesus Christ. We must believe that He is the Son of God, sent from heaven. He lived a perfect life and made a perfect sacrifice for sin. He rose victoriously from the grave and ascended into heaven. It is a faith in who Jesus is and what He has done at Calvary that saves us.

That Paul thanks God for this saving faith in the Roman Christians is evidence that such faith is the work of God. He is the One who instills faith in His followers. Paul’s praise, however, is not only for the faith that God has given to the church in Rome; it is for the good report that faith receives throughout the world. He praises God that their faith has grown into a persevering trust in God in spite of the hardships that surround them. They have sought to live out their faith. Some churches are famous because of their pastor, their stained glass, their architecture, or their size. The church in Rome was famous because of their faith. Their faith was an encouragement to believers everywhere, including Paul.

Paul’s desire to “impart some spiritual gift to them” was not so much to give them something they lacked as it was to strengthen them in their faith. His desire was to share with them his gift of knowledge, wisdom, and apostleship that they might support one another in their love for the Lord and in the work of His kingdom.

1. For what does Paul give thanks concerning the churches in Rome?

3. Explain in your own words the various substitute faiths that people adopt. Give examples.

4. What is necessary for a Christian to believe?

5. What kind of faith did the people in the church of Rome have?

6. What is a genuine faith?

7. Can you give modern examples of people whose faith is spoken of throughout the whole world?

8. What makes an “outsider” take note of the Christian’s faith?

9. How is our faith best advertised to those around us and to the world?