Genesis 38 was a necessary chapter that fits perfectly in the story of Jacob’s family. Joseph is chosen by God for some special purpose (to rule?), but his brothers sell him to merchants on the way to Egypt (Gen. 37). Then Judah moves away from his own family and settles in Canaan (in more ways than one). Canaanite culture and worldviews threaten to swallow up Judah (and perhaps the rest of the family). Even Judah’s family line is threatened until Tamar deceives her father-in-law in order to secure a child and thus raise up seed (and a name). Still, something must happen to move Jacob’s family away from Canaan lest the church of God, Jacob’s family, be lost among Canaanites. God has a great plan in mind, and Joseph will be the agent in that plan.

The text somewhat abruptly switches back to the Joseph story, basically picking up where it had left off at the end of chapter 37. Joseph is sold to an Egyptian official named Potiphar. He is described as “the captain of the guard,” which suggests that Potiphar headed the security teams that surrounded the Pharaoh, a kind of leader of the Egyptian “secret service.” Some have wondered whether there were Asiatics who were temporarily in charge of Egypt at this time, thus allowing Joseph to be well received in Egypt. However, the name “Potiphar” is Egyptian, and an Egyptian Pharaoh would not have employed a non-Egyptian to be his chief bodyguard.

In any case, there is a significant statement made in verse 2, and its truth is repeated in this chapter several times. “The LORD was with Joseph and he prospered.” See verses 3, 21, and 23. Joseph is in the house of Potiphar at first, and then later he is in prison. But no matter where he is in the events of this chapter, the covenant God is with Joseph with a noticeable result: prosperity and blessing are experienced. This is a very important notice, because in some versions of telling this story, the accent or emphasis falls on “how Joseph resisted temptation.” The suggestion is that Joseph’s story in Genesis 39 is told to present first of all a model to us of “good Christian behavior.” And the application would then be, “Go, and do likewise.” While it is true that we certainly commend Joseph’s response to his several situations, in Potiphar’s home and later on in prison, the key to Joseph’s “success” is the very presence of the covenant-making and covenant-keeping God. The Name of God used here is the one that will later be given to Moses at the burning bush (Exodus 3). That same God is not stranded in Canaan with Jacob’s family, but He chooses in His grace to be with Joseph through everything. “The LORD was with Joseph”… and that will make all the difference!

What’s more, the Lord’s blessing upon Joseph is evident to his master Potiphar. While it is too much of a stretch to say that Potiphar becomes a true believer, we can say that the Egyptian official is convinced that the God of Joseph is with this young man, and that is a good thing. Joseph is given grace to hold on to this God, and his response is to take his responsibilities and duties seriously. This leads to promotion for Joseph in the household of Potiphar. Literally, Potiphar puts everything into Joseph’s “hand” (see verses 3, 4, 6, 8, 22, 23). Blessings begin to flow into the entire household (verse 5) “because of Joseph.” The text says that these blessings could be seen in both the house and in the field. Did the birth rate pick up among Potiphar’s servants? Did his fields yield a bumper crop? The text is silent on these matters, and yet we are tantalized to wonder how the blessing of the Lord became physically evident to them. Furthermore, the providence of God is such that this young, strong Hebrew is not sent out to work in the fields, but he is kept in the house where his abilities are put to work. Potiphar will trust him (much like father Jacob had trusted him) so that he will not be bothered with the details of the household: Joseph is in charge, and he knows what he is doing.

Joseph is the son of a very attractive mother, Rachel. While we do not know what Jacob’s physical appearance is like, we read in verse 6 that Joseph is both well-built and handsome. (Similar things will be said about David and Esther later on.) Keep in mind that he is still a young man, and he is all alone in terms of having no family around to help him, support him, or protect him. Even Daniel had his three friends in the court of Nebuchadnezzar, but Joseph is isolated in the sense that he has no community of like-minded believers around him.

He is thus prey to abuse by those in authority over him, and he catches the eye of his master’s wife. The story reads like a modern TV soap opera, but the result is much happier than the silly soap opera. Yet Joseph will not have an easy time of it, and his faith and moral fiber will be sorely tested.

Joseph is a young and attractive man. This catches the eye of Mrs. Potiphar, and she desires an affair with him. “Lie with me!” she orders. This is not a one time incident: verse 10 tells us that her sexual invitations were a daily temptation to Joseph. Her lurid enticements were a kind of sexual harassment that was uninvited and unwanted. Scripture includes the speech of Joseph in verses 89 in which he lays out the reasons why he will not go to bed with Mrs. Potiphar. First of all, Joseph points out that he is placed in charge of everything in Potiphar’s house. Humanly speaking, Joseph is at the top; only Potiphar’s wife is off-limits to him. Secondly, and much more importantly, the adulterous affair that she wants with Joseph would be sin against God. Joseph not only knows God’s will, he embraces it as his own. Adultery is a “wicked thing” in the eyes of God, and it brings misery to all who practice it.

Joseph’s resistance to these enticements is no slight thing. As a servant, he does not have a lot of room to maneuver. It is not the case that he can quit his job and apply elsewhere. Is he going to go to a local court and file a complaint against this woman? Not likely! In a way he is trapped in the situation, and we may well imagine that the power of temptation for a virile young man, a servant no less, would be enormous, almost overwhelming. But, here is where the chapter’s refrain (verses 2, 3, 21, 23) is so important to keep in mind: “the LORD was with him.”

Potiphar’s wife attempts to force him into adultery, but Joseph flees this immorality. He leaves behind his cloak in her hand. It is his clothing again that becomes important! His special coat, dipped in blood, suggested to Jacob that Joseph was dead. Now, in Mrs. Potiphar’s hand, his coat is the evidence, the “smoking gun,” to both servants and Potiphar alike that this “Hebrew slave” was not as good and virtuous as he seemed. Joseph is falsely accused, and the wicked woman’s story seems believable indeed. When no one was around, this slave took advantage of the situation and tried to rape this poor, defenseless woman! She screamed when he had disrobed and attempted to rape her. Her screams (no tape recording available, of course) had frightened young Joseph to flee. This is her story to the other servants and to her husband.

What is interesting to notice, however, is that Potiphar, while very angry, does not kill Joseph. After all, since Joseph is nothing more than a servant, what rights would he have? And attempted rape against the official’s wife? Death, of course! Yet God is with His people, even in the valley where death casts a shadow and where false accusations are made, and that is no different here. The fact that Potiphar does not kill Joseph but instead places him in a place for royal prisoners suggests at least two things: first, Potiphar must respect the accusation of his wife against Joseph at some level; he must “save face,” both for himself and for her. So he must do something. But second, one wonders if Potiphar does not fully believe his wife’s story, and so in his heart he really has no desire to kill the young man Joseph. Potiphar must do something with him, but he spares his life. The jail for royal prisoners would not be the worst spot at all. God protects His own! Joseph survives another near death experience. 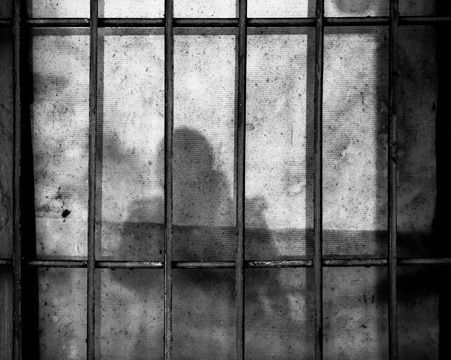 The story of Joseph in prison seems to be a repeat performance of what had happened earlier in Potiphar’s house. Again, “the LORD was with him.” The Spirit of Jesus Christ is so effective in the heart of Joseph that he applies himself and his God-given talents to the work in the prison. God softens the heart of the jail’s warden so that Joseph is assigned responsibility over the other prisoners. Just as Potiphar was so confident in Joseph and his work, the warden now takes the same attitude. Joseph, though accused of attempted rape, is viewed as completely trustworthy by the prison officials. The LORD is not only sanctifying the heart and life of Joseph, He is prospering Joseph’s work in such a way that many others around him notice it.

The thoughtful Christian who reads this story should not respond by saying, “O St. Joseph, pray for us!” That would keep our attention upon man. The good news that the text keeps before us is that our faithful God the LORD is with Joseph. God is working, even in Egypt, even in events that are sordid, unseemly, and quite unfair. The praise and glory goes to that covenant-keeping God.

He has great things in store for Joseph, his family, indeed for the coming of the Kingdom of His Son, the Lord Jesus Christ, through this family.

Lesson 5: Points to ponder and discuss

2. When people are in positions of authority, they have power that belongs to that position or office. What are the dangers of having such power? That is to say, how can power be abused? How are people without power in danger of being abused and mistreated?

3. Is the emphasis in this chapter on what the LORD is doing, or is the emphasis on Joseph’s courage and moral strength? Is Joseph being held up in the text as a “good example?” Why or why not?

4. Read 1 Corinthians 6:12–20. Check a Bible encyclopedia about what the city of Corinth was like morally. Have things changed much today? Paul says, “Flee from sexual immorality.” Joseph had to flee physically from Potiphar’s wife. Our bodies and our sexuality are wonderful gifts from God, but how has our society distorted those gifts? Where are the temptations to immorality today, also in our homes and communities?

5. To an unbeliever who reads Joseph’s story, he appears to be a victim of “bad luck.” But Christians know something much better and quite different about this story. Trace how the hand of God has kept guiding the destiny of Joseph, so that in peril of being killed, he instead is preserved and even promoted.

6. Read Psalm 1. This wisdom psalm describes the truly blessed man. It notes the two ways of life that a person can follow and the outcomes for each way (Ps. 1:6). How did Jesus Christ fulfill what this truly blessed Man is? How can this be seen in Joseph in Genesis 39?