Jacob has met a “mysterious Stranger,” and they wrestled through the night. It becomes apparent that this Man is no ordinary human being. He gives to Jacob a new name—Israel—since he has struggled with God and won. Jacob has become the “winner” by sovereign permission and divine appointment. With this new name, this elect child of God now moves on in redemptive history. God has been with him during all these years of struggle, and God will continue to be with Israel (Jacob), even if He needs to struggle with him from time to time. The night of wrestling and struggle sets us up for the next great challenge that Jacob will face, namely, he must meet his twin brother Esau again. Jacob has met one Man; now he faces 400 men!

During these past twenty years, it appears that Esau also has become powerful and successful. He has four hundred men with him. Jacob, for his part, divides his household into groups such that his beloved wife Rachel and son Joseph are last, placed in the safest part of the party. The maidservants with their children are the vanguard of the entire clan, with Leah and her children following afterward. In other words, the (presumably) least loved group goes first, with the best loved at the end. At the very least, Jacob is being cautious because he does not know in what mood or with what spirit his brother Esau is approaching him.

Jacob sets the tone for the meeting with Esau. He comes ahead of his family, showing at least external bravery, and he bows down seven times to his brother. One full prostration on the ground would have been enough in that culture, but seven times is a “perfect” demonstration of absolute submission and full honors to Esau. Earlier Jacob prayed for the LORD’s help (Gen. 32:9–12), and he has recently wrestled with the divine Stranger at night, emerging with success. God is responding to His chosen “son” to increase his faith and confidence in a situation that is potentially deadly.

The text tells us in verse 4 that Esau ran to meet Jacob. Although both men are well on in years, Esau retains some physical vigor. Jacob is clearly at a physical disadvantage as he limps along. Here is where he must trust again upon the goodness and protection of God because Esau has the manpower to attack and devastate Jacob and his household.

The meeting goes much better than what Jacob had anticipated. Jacob’s concerns appear to be groundless. It is indeed a tender moment after 20 years of separation. It reminds the student of the Scriptures of other tender moments of greeting: Joseph greets his brother Benjamin (Gen. 45:14) and later his father Jacob (Gen. 46:29). In the New Testament the father in the story of Luke 15:20 runs to meet his prodigal son, even after the son had left the father’s house in a rather dishonorable manner. Family members meet each other with warm embraces and freely-flowing tears. We might well sing Psalm 133!

Notice the words and the actions of Jacob as he interacts with Esau. This is a fascinating study of how the two twin brothers relate at this reunion. Jacob refers to himself as “your servant” (see verses 5, 14), while he calls Esau his “lord” (see verses 8, 13, 14 [twice], and 15). In the ancient world, that kind of language suggests a relationship of superiority for the one, servanthood and humility for the other. At one level, it is designed to put Esau into a “kinder, gentler” mood, if he is in fact still harboring some of the anger and bitterness that he had two decades earlier.

Esau, on the other hand, addresses Jacob as his “brother” (verse 9). For Esau, it appears that he is ready to let “bygones be bygones.” Or, is this a very clever trick on the part of Esau? In any case, Esau has a number of questions: “who are these?” and “what do these gifts mean?” Jacob uses this to testify about favor and grace. The family is God’s gracious gift, His favor, to Jacob, and the gifts that Jacob has so generously sent ahead to Esau (see Gen. 32:13ff) were to win Esau’s favor. Jacob has received blessings, and he passes on a generous portion to sweeten the mood of his brother, if he needed that.

It may be that Jacob feels some guilt in taking the blessing away by deception in Genesis 27. God has showered him with abundance, and he shares some of it Esau. The word sometimes translated as gift is literally “blessing” in verse 11. Jacob had obtained the blessing pronouncement from his father by means of deception in Genesis 27. Now he is ready to give Esau a generous portion of blessing in the form of these many valuable gifts. Perhaps it is Jacob’s way of making amends. 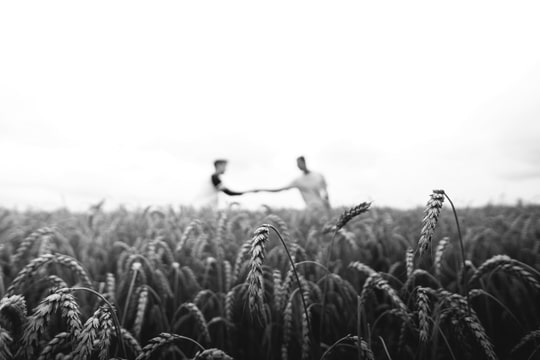 But Esau tries to dissuade him. He claims that he has been blessed; he has plenty (verse 9). What is the source of these blessings? We are not told. If Jacob is somewhat thrown off balance, we readers almost certainly are. What has happened in Esau’s heart? There have been tears from both of these elderly men. Either Esau is a great actor, or he is much different from the person we saw at the end of Genesis 27, when he was fully determined to kill Jacob.

A further irony is Jacob’s remark about Esau and the “face of God.” See Genesis 32:24-32, where Jacob had seen the face of God in the person of the mysterious Stranger with whom he had wrestled through the night. As a divine Person, He could have destroyed Jacob, but He does not. Now in Genesis 33, Jacob meets a powerful brother, one whose 400 men could have destroyed him. But Esau does not do so. Jacob is experiencing the protecting power of God. Earlier as well, it was God who intervened by means of a dream to tell Laban to leave Jacob alone, and Laban did not attack Jacob. Laban barked loudly, but there was no bite. But we do not read that Esau has received any night vision or dream to tell him to deal kindly with his brother. Yet clearly Esau has changed. God’s Spirit blows where He wills.

Esau wants his forces to go with Jacob and his household, perhaps as a kind of armed force to escort his brother, his family, and his belongings into Canaan. Jacob declines this offer, giving the excuse that the children and the female animals are too weak to make this trip at a vigorous speed. We find this excuse of Jacob not convincing, seeing that Jacob and his retinue had traveled away from Laban in very good time. It may very well be that Jacob is suspicious about his brother’s motive in making this offer: can Jacob fully trust Esau?

Jacob tells Esau that he can just travel on ahead. Eventually Jacob and his household will arrive in Mt. Seir. (This is the region south of the Dead Sea where the Edomites, the descendants of Esau, will live). But Jacob apparently never goes there. Has he deceived his brother one more time? Does Jacob simply become “too busy” with living in the Succoth region that he just never gets around to traveling down south to Mt. Seir?

Esau and Jacob will separate as brothers again, if not actually friends. No boundary stones are needed to mark a border, a kind of “fence,” between them (as in the case of Laban and Jacob; Gen. 31:51–54). Will this good will between the twin brothers last during their lifetime? How will their descendants relate to each other? Time will tell, but that story will not be as pleasant as the story told here in Genesis 33.

Esau travels to the Seir region, while Jacob settles at Succoth (which means “booths, tabernacles”). The text tells us that he has safely come back home. He eventually comes to live at Shechem in the central part of Canaan. It is here that “Jacob’s Well” would be dug (cf. John 4:5-6). Jacob is coming home, as he is settling in with his household. Remember that this is the land God has promised to him and his forefathers! See how this is an answer to his prayer in Genesis 28:21. Later he moves on to the Shechem region (about 30 miles or 48 km distance).

This is the Promised Land, to be sure, and yet Jacob must purchase land from the Shechemites. But see what he does with it: he sets up an altar. The significance is that this spot of worship serves as a kind of outpost for the kingdom of God. In the midst of Canaanite idolatry and paganism, here is a place where the true God might be worshiped and honored. The NIV tells us that Jacob calls it “El Elohe Israel,” i.e., God, the God of Israel.

What does this say about Jacob, with regard to his attitude toward God and his attitude toward his own new name? Perhaps it tells us that God’s Spirit is further sanctifying the heart and life of Jacob. This is wonderful to see in other people in God’s great story: they never stand still, so to speak, but God moves them from one glory to another glory as they undergo many experiences in their lives. Their faith deepens, their hope becomes more secure, and their love matures. Biblical saints still have many flaws, and the devil keeps seeking to trip them up, but God begins a good work in Abram, in Isaac, in Jacob, in David, and in many more, and He will bring that good work to completion (cf. Phil. 1:6)

Lesson 12: Points to ponder and discuss

1. Jacob arranges matters to gain Esau’s favor and also to place his most loved family members (Rachel and Joseph) in the better defensive position. Is this cowardice on Jacob’s part, or is it wisdom and simply being shrewd?

2. Read Genesis 27:26 and 29. What is the irony of this kiss in the light of earlier events? Why does Jacob bow seven times? Is this a kind of “overkill” on Jacob’s part, too much humbling of himself?

3. What accounts for Esau’s change of heart toward Jacob? Is it his “own good nature” that “acts as a check on him,” as one commentator puts it (cf. Hamilton, Genesis 18–50, p. 345)? Or, do God the Father and His Spirit have a very important role to play here? Apart from regeneration, what is the heart attitude of human being toward God and the neighbor? See Heidelberg Catechism, Q/A Lord’s Day 3.

4. Why was Jacob so fearful of Esau? What things had God said and done earlier that should have removed Jacob’s fears? There are many places in the Bible where we read, “Don’t be afraid!” And yet God’s children are so often afraid. Why is this so? What is it that can drive away our fears?

5. What was the purpose of the many gifts that Jacob presses upon Esau? What is the purpose of gift-giving, whether in ancient times or in our times? How often do we give in order to get? Can gift-giving become a subtle form of manipulation? How is God’s giving so different from our practices?

6. By changing Esau, what has God brought about that will advance His kingdom through Jacob? Or, to put it in a different way, what would have happened if Esau had come out to annihilate Jacob and his family? What does all this say about our God and the outworking of His saving plan?

7. Jacob sets up an altar for the true worship of God, even in pagan Canaan. Christian congregations also form as worshiping centers in the midst of a wicked culture. How can the presence of a church (even the church’s name!) serve as a light, a grace-bearing outpost, in your community?