Jacob faces his brother Esau who, he learns, is coming to meet Jacob with four hundred men. Jacob’s response is typical of those who feel their back is to the wall: he becomes physically defensive, sends great gifts to Esau, but most importantly, he is thrown back to prayer to the living God. Jacob has nowhere else to go except to God. Only God has the words of everlasting life; only God has the power to save us alive.

The action in this story occurs at night. The sun will rise at verse 31. But before the sun rises, Jacob will send all of his family ahead of him by crossing the fords of the Jabbok. This is identified as the Wadi Zerqa (Zarqa), a dry-stream bed in which water flows only during the rainy season. It is located over 20 miles (about 32 km) north of the Dead Sea on the east side of the Jordan River. In other words, Jacob stands at the edge of the Promised Land of Canaan, but he is not quite there yet.

Sending his family and all his possessions over this brook at night would be a very cumbersome and even dangerous venture. This is something that almost certainly could not be done without moonlight and torches. But once all are across the stream, we read that Jacob was “left alone” (verse 24a). It reminds us of the night spent 20 years earlier at Bethel when he was fleeing Esau and leaving the Promised Land. Once again Jacob, despite all his wealth in family and earthly goods, is totally vulnerable and defenseless.

Who is the Stranger in the night?

Jacob is not a young man anymore, and yet we read that he engages in a wrestling match until daybreak. But who is his wrestling opponent? The text gradually reveals the identity, and both the reader and Jacob himself eventually recognize who this “mysterious Stranger” is. By the time dawn breaks, it has dawned on us all who He is.

Yet in the history of interpretation there have been a variety of explanations. Nahum Sarna (Genesis, p. 228), a Jewish commentator, says that Jacob struggled with “the celestial patron of Esau”! Some commentators in the higher-critical tradition say that Jacob’s opponent was a “Canaanite river god”! But what does Genesis 32 itself say? As the wrestling match begins, he is identified as a man (verse 24). But by daybreak, when the “man” tries to break off the match, the Stranger says that Jacob has wrestled with God. Jacob himself acknowledges this in verse 30 when he says that he had seen God face to face. 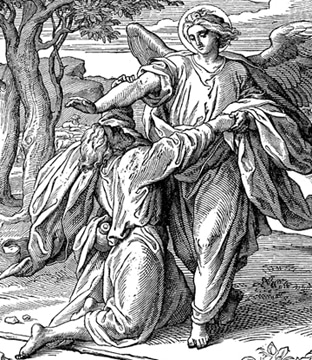 Read Hosea 12:2–5. There it says that he wrestled with an angel and prevailed. So the Scripture calls the “mysterious Stranger” a man, God, and an angel. We have met this kind of identification combinations before. Three strangers come to meet Abraham in Genesis 18, and one of them is the LORD Himself and the other two are angels. Later on in Joshua 5:13ff, Joshua will meet a “man” with a drawn sword, but he turns out to be the Commander of the armies of heaven, the LORD (cf. Joshua 6:1). In Judges 13, the “angel of God” is the “man of God.” Many of these occasions are understood to be an appearance of the Lord Jesus Christ Himself, centuries before He is born in Bethlehem.

One question that comes to mind is this: why does this divine Being wrestle with Jacob? Is He attacking him? Perhaps this suggests a later encounter in Exodus 4:24, where Moses is going back to Egypt, at the command of the LORD, but God “attacks” Moses, indeed He tries to kill Moses! Is the LORD trying to prevent Jacob from returning to Canaan? Or, is the wrestling a kind of test, one similar to the LORD’s test of Abraham in Genesis 22, when He tells Abraham to sacrifice his only, beloved son? In the Bible to meet someone “face to face” can be an encounter that may be hostile, or it can be friendly. Is this just a “friendly wrestling match?”

Further head-scratching things come up later. If this being is divine, superhuman, an Old Testament appearing of Christ, then how do we understand verse 25, “When the man saw that he could not overpower him…”? Is this something that God could not do? Certainly if God is able to create all things by the power of His Word, surely He can defeat this elderly man, Jacob, even if he is in really good shape! God has come to Jacob in the form of a man, and He has even allowed Jacob to wrestle Him “successfully.” This is an instance of God’s merciful condescension: He comes down to our level to reveal something of Himself and of His purposes with mankind in the covenant of grace. But what is God revealing here?

At the same time, notice that Jacob has his hip dislocated (or made numb) by the simple touch of the Man’s hand. This suggests the superhuman strength and power of the Stranger. The Stranger does not “win” the wrestling match, and yet He can apply a single touch and wrench Jacob’s hip socket out of place.

Jacob asks a blessing… and gets a new name The “mysterious Stranger” wants to break off the wrestling match as the dawn appears. It is not clear why He wishes to stop at that point. Perhaps it is because in the full light of the day, Jacob will “see” God, but that is a sure sentence of death. No one can see God and live.

Jacob has the strength to hold onto the Man. “I will not let you go unless you bless me!” To be sure, human beings in the Bible can bestow blessing, but certainly God alone can make any blessing effective. In any case, the greater blesses the lesser, and Jacob by now senses that he is holding onto a divine Person. Yet he is not so much afraid as he is bold to ask for the blessing. Jacob sees that only God can give him a blessing. No more tricks or human cleverness will work now.

Rather than immediately giving Jacob a blessing, the Stranger asks for his name. Jacob, the name based on the word for “heel,” is his name. The Man says that his name will no longer be “Jacob,” but it will be “Israel.” Earlier God changed the name Abram (“exalted father”) to Abraham (sounds like a “father of a multitude”), and Sarai becomes Sarah (both names mean “princess”). The new name indicates something of the place and purpose the person will have in the unfolding of God’s redemptive program.

The name Israel means literally, “God struggles,” but not in the sense that God has trouble getting to His goal. Rather, this new name points out the nature of living in the covenant with the true God. Jacob has indeed struggled with two sets of opponents: with God and with men (e.g., Esau, Laban). Yet Jacob has overcome. In all these struggles God has been with Jacob. This is what He promises His own whom He has always loved. God’s presence with Jacob is not to endorse everything Jacob has done to other people. It is to carry him along so that God might establish a people of His own, so that they might be the light of the world, so that the Christ would come in our flesh.

Jacob wants to know the name of his wrestling opponent. Fair is fair, after all: Jacob surrendered his name. Verse 29 reads, “Please tell me your name.” But the Stranger will not give it. He grants a blessing, but He remains closed-lip about His own name. He will leave that night, before the day breaks, and Jacob will have no name by which he can identify the Man.

A blessing won at a price The Man blessed Jacob (verse 29c), just as Jacob had wanted. But the blessing comes at a price: Jacob limps as he walks, for he has been wounded in his thigh. The Man has yielded nothing, not even His name. Jacob must learn something in this night of wrestling. He—and God’s people today—must know that our covenant God is also tenacious, long-suffering, patient, to a people whose sins and sinful nature make them, in fact, worthy of eternal hell. God has committed Himself to His Word for the sake of the Christ and all the elect. Why does God even bother? The answer is because He has committed Himself to this, and it is all for His grace and glory. He will not break His Word. But that is the nature of divine, electing love.

Who won this wrestling match? If Jacob “won” against God, then meeting Esau will be no match at all! “If he has survived meeting God, he will survive his meeting with Esau” (Wenham, Genesis 16–50, p. 297). Now Jacob knows something, not so much about his strength, but he knows something about his God. This is reflected in the name that Jacob gives to the place. “Peniel” means “face of God,” for Jacob makes a confession of faith, “I saw God face to face, and yet my life was spared.” As the morning dawns, it dawns on him that the God who will wrestle with him all night, the God who can dislocate his hip, is the God who is not poised to destroy him. He is the God who is really on his side. He is, after all, Immanuel (“God is with us”).

We have come full circle in a sense: when Jacob arrived at Bethel in Genesis 28, the sun set and it was night. Then the LORD God appeared to Jacob in a dream, and He gave him the promises of the covenant of grace. Twenty years of blessing pass. Now, in this chapter God comes at night as a Man to Jacob, blesses him especially in the gift of a new name. And now the sun rises over Jacob, renamed Israel, as he limps back to his family.

Lesson 11: Points to ponder and discuss

1. One commentator says that the “two most significant events in the life of Jacob were nocturnal theophanies,” that is, God appears to him at night. The first was at Bethel (Gen. 28:10–22) and now here at Peniel. Each appearance (theophany) was life-changing. Why were these significant, and how were they life-changing?

3. Jacob will not let the Stranger go until He gives Jacob a blessing. Why does Jacob want this blessing? He has been blessed before by his father Isaac (Gen. 27), and God has not only promised blessings to him, but also delivered in terms of family and possessions. Does Jacob want a blessing simply to be successful in meeting Esau? If so, is this a true act of piety?

4. How do we receive God’s blessings today? Why do we want His blessings—for ourselves, or for the coming of His Kingdom?

5. How, do you think, would Israelites hear and understand this story, especially what is revealed about the source of their national name? Why do we need to hear and meditate on this story today?

6. Sometimes Christians speak of periods of deep discouragement as the “dark night of the soul,” a time of depression and setbacks. Are we really ever abandoned by God? How can our faith hold onto God? What role can the Christian community play for brothers and sisters who go through such a period of darkness and discouragement?

7. The holy Trinity is three Persons. The Father does not appear, and the Holy Spirit is like the wind (cf. John 3), whose effects we can experience, but whose Person we cannot see. The second Person of the Trinity appears from time to time, supremely in the birth of Jesus in Bethlehem. But what does John see of Christ when he sees Him in Revelation 1?