One crisis with Laban has been averted; another looms ahead for Jacob with Esau. A covenant seals the deal between Jacob and Laban so that there may be peace between them and their descendants.

“Good fences make good neighbors,” it is said. But Esau is a new neighbor that is just over the Gilead horizon to the south. Esau was fiercely angry when we last met him in the text (Gen. 28). Are there still storm clouds in his heart and soul? 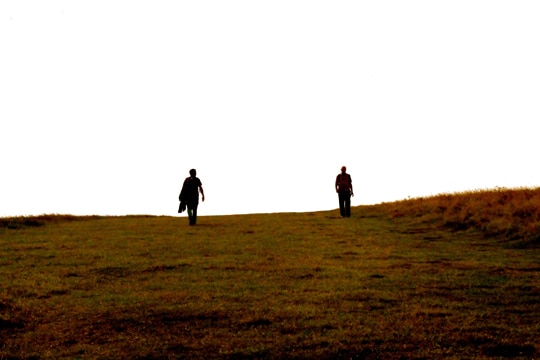 Jacob continues to move toward the place where he will encounter his twin brother Esau. Laban, his father-in-law, is headed back to his home (Gen. 31:55), but Esau is before him. Yet while Jacob is moving south, we read that “the angels of God met him” (Gen. 32.1). The last time that Jacob saw angels was in Genesis 28:12 when he spent the night at Bethel, and he dreamed of angels ascending and descending on the stairway that connected heaven.

When Jacob had realized the presence of God “in that place” of Bethel, he had responded to the dream of the previous night with wonderment, fear, and with a vow to serve the Lord God if He carried out His promises. It was not a prayer that was addressed to God directly. Here in Genesis 32 we now have the first recorded prayer of Jacob. This is not to suggest that this is the first time that he ever prayed in his life. We simply are not given information on the prayer-life of this patriarch (as we are rarely given insight on the prayer-life of many Biblical characters!). In any case, review the various aspects that Jacob mentions in his desperate prayer to God:

1. He addresses the God of his ancestors, Abraham and Isaac. He is speaking to the one, true God.

2. He recalls something that God had said to him earlier, specifically, the fact that God is the One who had directed him to return to the Promised Land and to his family. Jacob recalls a bit of history.

3. He humbles himself: “I am unworthy of all the kindness and faithfulness You have shown your servant.” His word for “unworthy” is literally, “I am the little one, the younger one.” He was, after all, the younger of the twins born to Isaac and Rebekah. He adopts a lowly spirit in the presence of Almighty God.

4. He acknowledges that he has been blessed. From one walking staff… to two groups!

5. He presents his petition, “Spare me! I’m very afraid for myself, for my children and their mothers!”

This is really an awesome prayer! God often seems to whisper in our prosperity, but He shouts to us in our pain. We have no way of knowing how “close” Jacob was to God during the twenty years of living with Uncle Laban. He labored, and he prospered greatly. Did Jacob give God the thanks and the praise of this during those twenty years? We do not know. But now, as Esau approaches, Jacob is afraid of losing all that he has. Yet, because he has nowhere else to go, he turns to the covenant God, who is ever faithful, and Jacob reminds the Lord of what He has said Himself. “This was Your Word, O my God, and these were Your promises!” God is working in Jacob, stirring up in him a proper and prayerful dependence upon his heavenly Father.

It is interesting to note that this section begins and ends with a notice that Jacob spent the night there (verses 13 and 21). The wrestling with the “mysterious Stranger” will also occur at night. Jacob has not yet come into the daylight, one might say. That will come later. For now, he makes plans at night.

Jacob, ever resourceful, draws up a strategy to pacify Esau (verse 20). He wants to soothe his (possibly) hostile spirit with wave after wave of gifts. These are valuable gifts of various animals: 550 animals in total, of which 490 are female. The female animals are valuable, of course, because of the prospect of bearing more animals later on and thus increasing the owner’s wealth.

We wonder: is Jacob feeling something of “guilt feelings” over having deceived his brother Esau in Genesis 27 by getting father Isaac to bless him? Is this a way to pay back his brother with something of the abundance that the LORD has showered upon him? Perhaps so. In any case, the gifts are on their way, headed to Esau. Time will tell whether Esau will accept them (and favorably), or, whether he will tell the messengers of Jacob to “return them to sender.”

How different are God’s gifts to us in Jesus Christ! We earn nothing, and we cannot merit any of God’s blessings. All that we have is a freely given gift to us in Jesus Christ. The wage we earn is death because of our sins, both in terms of our actual deeds and the sinful nature we receive from the first Adam. Jacob is trying to win Esau’s favor. But Christians are liberated from all attempts to placate God’s justice, since God has dealt with all of our sinful deeds and sinful nature by pouring out His wrath in justice upon Christ on the Cross. Therefore, Christians live in joyful thanksgiving, not in cringing terror before God (cf. Rom. 12:1ff).

Lesson 10: Points to ponder and discuss

1. Read 2 Kings 6:8–17. Elisha is calm, even though Syrian armed forces have surrounded the village to capture him, because he knows that the angelic forces were present. Recall what Christ said in the Garden of Gethsemane about the legions of angels He had at His command. Do such angelic forces still surround believers today? How do Romans 8:31ff and 1 John 4:4 relate to this?

2. Jacob is afraid of his brother Esau. Does he have good reason for this fear? Why or why not? So many times we hear people in the Bible being told, “Don’t fear!” What are the reasons for fear in Christians’ lives? Are there things that we should fear? What things should we never fear? 3. Some twenty years have passed since Esau and Jacob have faced each other. Is it possible that a person can harbor a grudge or nurse anger for at least two decades? What would be the point? Does Esau have a just cause, if he indeed is still angry? What does the Bible say on  how Christians must handle anger? See Ephesians 4:26,27, and 31.

4. How do you evaluate the various strategies Jacob uses to protect himself and his grand camp? We might well ask, “Where is Jacob’s faith? If the heavenly messengers have come to protect Jacob and his camp, how trusting is Jacob, after all?” Is Jacob doing the human thing, “just to make sure?” “God is with me, but I’ve also got to be ‘practical’”? On the other hand, is wise strategy wrong? After all, Jacob is not using his strategy as a substitute for God, for his prayer shows his full reliance upon God.

5. Read Genesis 32:12. Why does Jacob remind God of the promise to make his descendants abundant “like the sand of the sea, which cannot be counted”? Could it be because Jacob is holding onto the promises of Genesis 28? Does he fear that a violent attack from Esau could wipe out the covenant future (humanly speaking)? Abraham had a similar situation in Genesis 22, when God told Abraham to sacrifice his only son, his beloved son. How did Abraham face that test? See Hebrews 11:17–19.

6. Reflect on what Jacob was like before he had fled from Esau, and what Jacob is like now. How has he changed, if at all? How does God work in His people to mature and sanctify them in Christ through His Holy Spirit?