In Lesson 3 we noted how the livestock that Abram and Lot gained while in Egypt caused strife within the family. The sin of not trusting God during a time of famine led to the separation between Abram and his nephew. The great wealth that Abram acquired in Egypt was not only to be found in the livestock but also among the servants that had come with them. One of those servants was Hagar. We see again how a sin of the past can have lingering effects and came to hurt Abram and Sarai again.

The chapter begins by noting that Abram and Sarai had no children. This was an ongoing problem for the couple, and we are reminded of it in almost every chapter we have studied so far. With every chapter, however, the problem became bigger, because every chapter carried with it a certain amount of time—time in which Abram and Sarai grew older.

The fact that they had no children must have created certain marital problems between husband and wife as well as problems concerning the promises of God. God had promised Abram a great number of descendants, and Abram believed God. That was the whole point of Genesis 15—but now we are in Genesis 16. Ten years have lapsed; twenty years since they had left Ur and still no nearer to the fulfillment of this promise.

Too often when we read these verses, we label Sarai as the villain—the one who led Abram into temptation. Sarai, no doubt, was herself disturbed by the fact that she could not produce a son for her husband. She believed in the promise as much as did her husband. Her disgrace was his disgrace. She, perhaps more than her husband, knew there was no human hope that the promise could be fulfilled in the way they had expected when it was first given. In fact, she had given up on the idea of childbearing and tells Abram that the Lord has kept her from having children (v. 2). Convinced her childbearing days were over, Sarai reasoned that God had some other way bringing about His promises. In her zeal for the promise she made a very generous offer to her husband, an offer that meant self-denial on her part.

In her enthusiasm, she moved ahead of God’s plan and approached Abram with the suggestion that Abram take her slave, Hagar, as a concubine. After all, God had promised the child to Abram—one from his own loins; God did not specifically say that Sarai would be the mother. According to the custom of the time, as shown in the Babylonian laws of Hammurabi, the child of a slave would legally be the child of the master. Hagar’s child would legally be Sarai’s child. Sarai indicated as much when she tells Abram her desire is to build her family through Hagar (v. 2). What better way could there be, she must have thought, for God to carry out His promise than for Hagar to offer herself up as the surrogate mother of Sarai’s child.

Unfortunately for Sarai, the plans of man seldom work out; in fact they never work out when they conflict with the plans of God. Her rationalization, along with that of Abram, upstaged their loyalty to God and to one another. Hagar was “promoted” from Sarai’s slave to Abram’s concubine. As expected, Hagar became pregnant, and while she was expecting, she became somewhat insolent toward her former mistress, Sarai. Her position as the mother of Abram’s child became more important to her than her position as Sarai’s surrogate. After all, she must have known about the promise that Abram’s God had given to the patriarch. She, like Abram and Sarai, thought that she had been singled out for the special honor of carrying the child through whom those promises would be fulfilled.

Sarai no doubt found sharing her husband with another woman harder than she had anticipated. And, when that woman became pregnant, it became even harder. She had humbled herself to suggest the arrangement, but when it worked, she was deeply humiliated. Not only did it prove that the lack of children was her fault and not Abram’s, but her own slave whom she had offered to Abram despised her.

Hagar’s attitude toward Sarai led to intense jealousy, to the point where the patriarch’s wife blamed her husband for her own suffering. She had given Hagar to Abram, but the deed was of Abram. Once the transaction took place, Hagar belonged to Abram, and it was his responsibility to protect her. Instead, Abram chose not to come between the two women and gave Hagar back to his wife. Suddenly Hagar was no longer the handmaiden blessed with the child of the promise, but she found herself once more to be the slave she had been. This time she was mistreated as never before, causing her to run away. 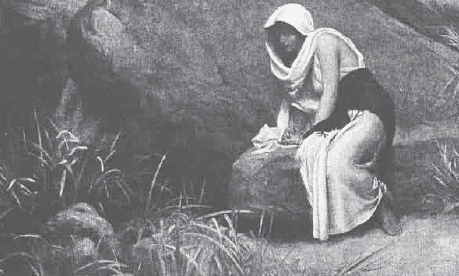 Fleeing to the desert to get away from her undeserved trouble, Hagar received an unexpected visit and an unanticipated blessing. The Angel of the Lord appeared to her while she was on her way back to Egypt (Shur is identified as being close to the border of Egypt). The Angel had three messages for Hagar. First, she received the command that she was to return to her mistress to resume the role of servant; second came the promise that her descendants would be great in number; and third, was the prophecy that she would have a son who would a wild, independent rebel against his brothers.

First of all, Hagar was told that she had to return and submit to Sarai’s authority. If Hagar wanted her son to have the blessing that Abram’s God promised, she would have to return to the path of blessing. Just as God did not spiritually bless Abram when he fled to Egypt, God would not bless Hagar and Ishmael if they returned to Egypt. His blessing was to be received in His Promised Land. So also today, God does not bless those who run away from the source of His blessing. Many people believe they can receive blessings from God outside of His church. Like Abram in Egypt, they may become wealthy, and like Hagar in Shur they may run away from authority, but they will not be spiritually blessed by God. His true blessings come through the means of grace; they are to be found in His church among His people.

Second, Hagar was promised that if she walked in the way of the Lord, her son would be the father of a large nation. That promise was fulfilled as Ishmael became the father of the Arab nations. In fact, the third aspect to the Lord’s message—that Hagar’s son would be wild, independent, and rebellious—begins almost immediately after son of the promise is born (Genesis 21:8–10). The conflict between Israel and the Arab nations begins in this promise and is carried out in the battle between Christianity and Islam. Any effort in making peace between the two goes against the promise of God that these two brothers/nations/religions “will live in hostility” toward one another (Genesis 16:12b).

Hagar recognized that the Angel was a messenger from Abram’s God. She knew the promises given to the patriarch; she knew his God. Now she understood that He was her God, as well. She marveled over the fact that the God of her master would look upon her, a poor fugitive slave girl. In her joy Hagar named the place Beer Lahai Roi, which means “the well of the Living One who sees me.” It is interesting to note that this is the only passage in ancient Near Eastern literature where the deity calls a woman by name. It is also the only passage in the Bible where a human gives God a name.

Before, Hagar had been too blind to see God; now she understood the more important truth that God saw her. He was not only Abram’s God, but her God, as well. As God revealed Himself to Hagar, He reveals Himself to us. God is more interested in us—even in our rebellion—than we are ever interested in Him. He is more interested in our future than we are. He has shown His love to poor, sin-enslaved individuals by sending His own Son to die on our behalf.

Hagar responded with hope. She delighted at the thought of God’s presence in her life and the promises that God had given to her through her son. In obedience to the gracious God who had revealed Himself to her, Hagar returned to Sarai and was willing to submit to slavery. She knew that her mistress would be harsh, but she was willing to endure the difficulties that came with her position for the sake of the promises given to her son.

The pain in this chapter came as a result of people seeking God’s promises outside of God’s will. It is not our duty to aid God in accomplishing His promises. We must believe the promises of God are true and respond in faith that He will work out His purposes in His time. When we try to manipulate God’s answer to His promises and our prayers, we will run into one problem after another. Sarai displayed a lack of confidence in God’s timing. The natural result was years of conflict between the seed of the slave woman and the future seed of the free woman (Cf. Galatians 4). The Christian life consists of waiting for God’s presence and action.

Only by waiting and trusting in God can we expect to receive His blessing. All too often we fail to take God into consideration as we make our plans. Then we cry out to Him when things fail. If we take matters into our own hands because we do not trust God for the results; we cannot blame God for the results that come out of those actions. Yet, even in the midst of pain and suffering, God is present with His message of care and concern. In Hebrew, the name “Ishmael” is a play on words meaning “God hears.” Indeed, He does! He still sees us and comes seeking us (Beer Lahai Roi).

1. What tensions, conflicts, and emotions do you observe as you read these verses?

2. Abram and Sarai had waited ten years for God to give them children. What might have convinced Sarai to help God fulfill His promise? Have you ever been tempted to “help” God?

3. Why do you think Abram, the man of faith, went along with Sarai’s plan?

4. Give examples in your life where you may have tried to rush into something without God and found it to be destructive.

5. How we sometimes blame God when circumstances of our own making do not go according to our plans?

7. Would the sacrifices and hardships experienced by first generation immigrants seeking a better life for their children be similar to that of Hagar as she returned to the tent of Sarai?

8. What does this chapter teach about the hardships that often enter our own lives?

9. How does it help you to know that the Lord sees, hears, and responds to your suffering and hardships?