In the portion of Genesis that we consider in this lesson, a man who was called Melchizedek seems to appear out of nowhere. He is introduced as the King of Salem; he blessed Abram and received a tenth of the spoils Abram had won in the battle, and then he disappeared as quickly as he arrived. The name Melchizedek is referred to again twice in Scripture, once in the Old Testament (Psalm 110) where he is described as “a priest forever,” and once in the New Testament (Hebrews 7) where he is described as a priest of God “without father or mother, without genealogy, without beginning of days or end of life.”

Melchizedek is a most mysterious person! Speculation about who Melchizedek was has been debated through the centuries. Origen (185–254) thought Melchizedek was an angel. Ambrose (339–397) believed Melchizedek to be a preincarnation of the Second Person of the Trinity. This view is still popular today even though Hebrews declares Christ to be “one in the order of Melchizedek” and not equal to Melchizedek (Hebrews 7:11). Martin Luther understood Melchizedek to be Shem, the son of Noah, who lived thirty five years beyond the death of Abram. One could argue, however, that we could rule this theory out because we know who Shem’s father was. John Calvin wrote that Melchizedek was a man in the land, alone and upright; a sincere cultivator and guardian of the true religion.

While we are told by Paul not to concern ourselves with endless genealogies (1 Timothy 1:4), it was considered important by the Jewish leaders. Priests were to come exclusively from the tribe of Levi. Diligent records were kept to insure that those anointed as priests were true descendants of Levi. If a person’s lineage could not be traced all the way back to the third son of Jacob and Leah, that person would not be permitted into the priesthood. Yet, Melchizedek was a priest long before Levi is even born! Hebrews points out that he was a priest, not by lineage, but by the appointment of God. He is probably the last official representative of the pre-Abramic religion who came to meet and welcome the new representative of the true faith. 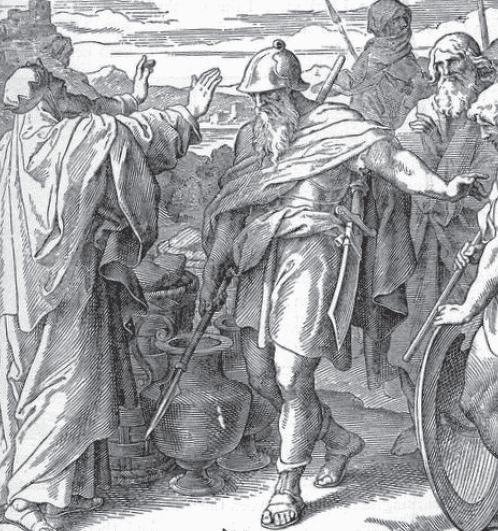 Abram and the King of Salem

While it may be entertaining to spend time discussing who Melchizedek really was, we must be careful not to let our discussion hinder us from discovering the importance of the encounter between the two men of God, Abram and Melchizedek. While we may not know many things about Melchizedek, we certainly do know a few things about him.

He and Abram lived in a day and age known for its corruption and violence. The kings in the plains were kings of unrighteousness, ruling over cities that were known for their promiscuity and perversions. In their midst was a man, whose name means “King of Righteousness.” He was the king of Salem, considered by many to be the future site of Jerusalem. “Salem” means “peace.” After giving great details of an incredible battle, Genesis introduces us to a man of peace. Melchizedek had not been part of the battle, nor was he among those who had been defeated.

In addition, Melchizedek was a priest. He brought bread and wine to celebrate Abram’s victory and then blessed Abram by bringing praise to God Most High. As Abram came over the horizon of his homeland, he brought with him all the freed slaves and the spoils of battle. He might well have seen this as the way Jehovah would give to him the land. He could have claimed as his not only the hills in which he lived but also the plush plains of the valley and all the people. He had conquered it all. If such thoughts had entered the mind of Abram, his encounter with Melchizedek put an end to them. Melchizedek celebrated with Abram and declared that it was Abram’s God who had given the victory. Abram returned from battle the same way he went into battle: a humble servant of God.

Their time together was not just a time for feeding the weary army. This was a formal celebration prepared for the victors by the King of Salem. Martin Luther insisted that the few words recorded in Scripture that are credited to Melchizedek (vv. 19, 20) were part of a sermon extolling the great God that both he and Abram worshiped. Afterwards, Abram acknowledged the priesthood of Melchizedek by giving him a tithe of all the spoils. The Patriarch and the Priest must have spent several pleasant hours together sharing what they understood concerning the God Most High.

Abram and the King of Sodom

Through the blessing Abram received from Melchizedek, he was introduced to the world around him. No one had thought much of Abram before his victory over King Chedorlaomer. He was a nomad wandering from place to place. Now, however, since he had defeated the enemy and freed the captives, everyone came running to him. One who came running was the defeated king of Sodom. He had lost all his possessions to the eastern confederacy and they, in turn, had lost all their possessions to Abram. This defeated king realized that Abram was a powerful man in Canaan. Everything by right belonged to Abram.

No doubt he had also observed the victory celebration. The tithe that Abram gave to Melchizedek must have aroused his interest. Instead of offering bread and wine, Bera, king of Sodom, acknowledged the power of Abram and approached him with a way in which the patriarch could divide the spoils. He came with what appeared to be a most generous offer: “Give me the people and keep the goods for yourself.”

For a lesser man this would have been a great temptation. Bera had offered him a very practical solution that would leave Abram with great wealth and fame. He would have been recognized as a gracious warrior by not keeping the people as slaves, as King Chedorlaomer would have done. He could have reasoned that this was the way that God was going to make him the possessor of the land. Whereas the King of Salem focused on Abram’s dependence on God for victory, the king of Sodom focused upon earthly success.

Abram refused the offer. He saw the offer of Bera as a temptation. It was an attempt by the king of Sodom to gain for himself some of the glory of Abram’s victory. Abram saw very clearly, however, that it was not his victory, but God’s victory. If he kept any of the goods from Sodom, he would never be able to say that he had depended entirely upon the Lord for his blessings. Abram wanted to stand out as a man who prospered, not because he was given possessions by an earthly king, but because of his faith in the heavenly King. He made very clear that it was God who was to receive the all of the glory—not Bera or Abram. So emphatic is the commitment of Abram to God Most High that in his reply to Bera he twice said, “I will take nothing.” There was absolutely no way the King of Sodom would be able to take any credit for anything that happened in Abram’s life.

Abram and the God Most High

While the King of Sodom came in his own name hoping to achieve personal fame; the King of Salem came in the name of the God Most High. The greatest battle in Genesis 14 was not that of the invading armies and their defeat by the patriarch’s men, but that Abram had to decide where his help was to be found. Would it be in his own courage and strength, or would he depend upon the strength of the God who had promised the land would one day be his?

By faith Abram was convinced that the spoils of battle were nothing compared to the promises of God. Beyond the potential wealth and success, Abram sought to glorify the name of God. Abram understood that anything that would detract from God’s glory and honor was wrong and something he wanted to avoid.

One of the great weaknesses in the church today is that there are so few within the church to make such an absolute and consistent commitment to God Most High. Abram had every right to the spoils but gave them up for the honor of God. What are you willing to give up that God might be truly glorified in your life? Are you spending more time on Facebook than you are with His Book? Are your Twitter messages longer than your prayers? Do you talk more about your favorite sports team than about Christ’s sacrifice? Do you play Xbox so much that you can avoid the fiery darts of the Phantom Force yet you have no defense against the fiery darts of hell? Dare we confess that we have attached ourselves to the possessions offered by the King of Sodom rather than entrusting ourselves to the King of Salem?

The priest of the God Most High called Abram to give the glory to God. One greater than Melchizedek has called you to bring honor and glory to the Living God. He calls you to put aside your trust in the things that the world has to offer and place your hope and trust in Jesus Christ who is the true King of Peace. We are to commit ourselves to worship, trust, obey, and serve Him as He has called us to do. Such a commitment takes faith. A true faith in Jesus is able to recognize the difference between Melchizedek’s blessing and Sodom’s offer. It is able to resist strong temptation by withstanding the false honor paid by the king of the world, seeking rather to bring honor to the King of kings. Such faith finds her hope in Christ, and Christ alone.

1. Who is Melchizedek and why are the two positions he held significant?

2. God is not mentioned in the first twenty seven verses of Genesis 15. How do the words and actions of Melchizedek and Abram put the previous battle into perspective?

3. Melchizedek and Abram spent time together praising the Most High God. How can Christians enjoy that same type of fellowship with others? How can we encourage one another in the Lord?

4. What decision was placed before Abram as he faced the two kings? What does his decision reveal about his faith?

5. Why did Abram refuse to take the spoils of the battle he had won?

6. Why did Abram refuse the offer made by the King of Sodom?

7. Why is it important for us to realize that ultimately it is God alone who is to be our Provider and King?

8. In what ways can we honor God Most High for the blessings and victories He gives us?

9. In what way is Jesus a priest like Melchizedek and therefore a High Priest greater than those descended from Levi?