Paul wrote, “Whatever a man sows, that shall he also reap.” Nowhere is that better illustrated for us than in the life of Abram. God had told the patriarch to leave his father’s country, his father’s people, and his father’s household to go to the place that God would show him. That was the call of faith. Abram believed it, left his land, and went to Canaan. However, he did not go alone. Instead of leaving everything behind, Abram left with his family. He took with him his nephew Lot. This nephew became a source of great sorrow for Abram.

Trouble in the Land of Promise

The trouble began when Abram, his family, and all their possessions came back from Egypt. They left Egypt to return to Canaan, but Egypt had not left them. Driven to Egypt by the famine, Abram and Lot returned as men of great wealth. Abram and his nephew had shared in each other’s poverty and hardships. Now returning to Canaan, they shared in each other’s wealth. The gifts of Pharaoh went to Canaan with them and made them very rich. This is the first instance of riches in the Bible, and along with it came an interesting problem connected with wealth. Because of their wealth, strife grew between the herdsmen of Abram and the herdsmen of his nephew, Lot. Partly because the land had not fully recovered from the recent famine, and partly because of their increased wealth, grazing land became scarce. The herdsmen of Lot and Abram began to quarrel over where their respective herds were to graze.

Abram was a lover of peace. He was also a hater of strife. So much so, that it almost cost him his wife in the last chapter. Because he cherished the family bond, Abram proposed a friendly solution. He was ready to give up his own interests to keep the family from quarreling. Abram suggested to Lot that they separate and pasture their herds in different areas—one in the plains, the other in the hills.

Abram was the leader of this entire adventure. He was the one who had been called by God to go to Canaan. God had made the covenant promises to Abram. One day he would be the possessor of the land. Lot was merely a tag-along. In addition, Abram was the older of the two. By rights, he should have chosen first. Yet Abram does nothing of the kind. He gives Lot the option to choose first.

It seems Abram had learned his lesson in Egypt. Whereas in the previous test, Abram worried for his life, in the second test he looked beyond his money pouch to God. He rested secure that God would provide for him regardless of Lot’s choice. He knew God would take care of him, trusting more in God’s word that in what he could see. Motivated by the promise of God, Abram was not concerned about where he pitched his tent. After all, one day all the land would belong to his descendants.

The Choice of Lot

Lot, on the other hand, is simply selfish. He had become very rich, and the trip into Egypt had a different effect upon him than it did his uncle. He shows no devotion to the Lord, nor is there any apparent need for the Lord in his life. What had been to Abram a learning experience, had been to Lot a temptation. Lot should have returned the right of choice to his uncle, or selected what he believed the inferior of the two options. After all, Abram was Lot’s superior in age and therefore entitled to first choice; Abram was Lot’s uncle and therefore deserving of Lot’s respect. Even more, Abram was Lot’s guardian ever since Lot’s father had died and therefore worthy of the gratitude of his benefactor. It was, after all, Abram who had made Lot rich.

Concerned about his own wealth and prosperity, Lot looked out upon the plush plains and thought they held the better future. Poor Lot. He fell for the oldest temptation in the book. His life was rather shallow, and when confronted with choosing between green pastures and rugged hillside, the choice came almost too easily. Moses, the author of Genesis, makes an interesting editorial comment in verse 10, describing the valley of the Jordan as looking like “the garden of the Lord, like the land of Egypt.” While it may have been as plush as Paradise, to Lot it looked a lot like Egypt—the place where he had accumulated his wealth. The option was clear: Bethel or Egypt—the place of worship or the valley of wickedness? He chose grass over grace. He chose what seemed materially better regardless of the company he would have to keep. Lot was motivated by what he saw—the well-watered plains of the Jordan.

Lot’s decision should serve to remind us that the eye is the organ through which Satan most frequently tempts people and causes them to fall. It began already with Eve when God forbade man to eat of the tree of knowledge of good and evil. The devil came and convinced Eve that God was holding something back from her and her husband. In Genesis 3:5 the serpent said: “God knows that when you eat of it your eyes will be opened, and you will be like God.” The devil promised to show Eve something—something she had never seen before. God said: “Believe My Word.” The devil said: “Come, see for yourself.” Genesis 3:6 records the dire results of the first temptation: “When the woman saw that the fruit was good for food and pleasing to the eye and also desirable for gaining wisdom, she took some of it and ate it.”

We see it happening again in Joshua 7 and the case of Achan. When Jericho had been defeated, the Israelites were to destroy everything. Neither plunder nor spoils were to be taken from the conquered city. But Achan saw some things he wanted and was tempted to take them. In his confession, he admits: “When I saw in the plunder a beautiful robe from Babylonia, two hundred shekels of silver, and a wedge of gold weighing fifty shekels, I coveted them and took them” (Joshua 7:21). Achan had coveted with his eyes that which God had told the Israelites to destroy.

Satan tried the same tactics when he tempted Jesus: “See these stones? You are hungry. Turn them into bread. See the ground? Throw Yourself off of the temple and You will see the angels save You. See all these nations? Bow down to me and they will be Yours.” Jesus responds by saying, No. . . . you say this, and you show me this, Satan, but God says . . .” Jesus quoted Scripture every time—His confidence was in the Word of God. 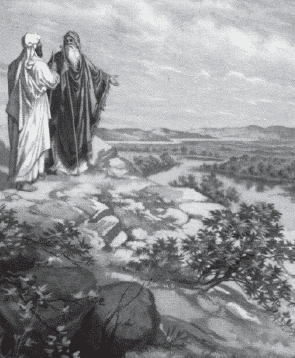 The Trust of Abram

Where Lot had what looked like Paradise, Abram had the promise. We cannot forget that the account we have before us is supposed to be about Abram, not Lot. Abram was the leader in this entire episode. He was the one who was called by God to go to Canaan. God had made the covenant with him and told him that he would be the possessor of all the land.

Abram seemed to have learned his lesson. This time Abram believed God’s Word more than he believed in what he could see. This time he knew that God would take care of him regardless of what the immediate sacrifice might be. Ultimately all the land would be his. God would see to that. This is truly a triumph of Abram’s faith. He lets his nephew choose first.

Abram had learned an important lesson in Egypt. In our last lesson, he had chosen for himself and he discovered that making his own choices without guidance from God led to great difficulty. In this chapter, Abram is content to leave the choices up to God. Before, in chapter 12, Abram was worried about how he was going to provide for his family and his herd. Now, in chapter 13, he seems to know that he does not have to worry about such matters. He has learned to trust God, knowing that God would provide for him. In that security, Abram allowed Lot to decide which land he would like for himself.

After Abram had allowed Lot to choose what looked like the more prosperous land, God came to the patriarch and reaffirmed the promises given earlier. God told Abram to do the exact opposite of what Lot did. Lot had “looked up and saw the whole plain of the Jordan.” Abram was told by God to lift up his eyes to the promise. God then expanded the promise by declaring to Abram that his descendants were going to be so numerous that to count them would be like trying to count each particle of dust on the earth. This must have been a staggering prospect for Abram, who as yet had no children. Yet how much better the prospect for him than for Lot because behind the promise was the word of God.

Rev. Wybren Oord recently moved from Kalamazoo, Michigan to serve as co-pastor at the Trinity Reformed Church in Lethbridge, Alberta. He is also the editor of The Outlook.

1. Both Abram and Lot became wealthy in livestock. How did each respond to his wealth? What is the teaching of the Bible concerning wealth and the Christian?

2. In what ways can the lure of affluence blind us to more important values?

3. Discuss the peaceful way in which Abram resolves the strife.

4. The land in the plain was said to be “like the garden of the Lord” and “like the land of Egypt.” Contrast these two descriptions of the narrator.

5. Lot was tempted when he saw the plush, well-watered plain along the Jordan. Give examples of similar temptations where what you thought was good really turned out to be bad.

6. Second Peter 2:7 describes Lot as a righteous man. Trace Lot’s downfall. What effect did it have on his family?

7. What effect did the decision of Lot have on Abram? What does this lesson teach us about the decisions we have to make in life?

8. How does Lot’s moving away further fulfill the call that God had given to Abram? How does God reassure Abram after Lot had moved away?

9. Compare the promises of God made in 13:14–17 with earlier versions of the promises. How does the wording in this chapter intensify what was said before?