This is a story about faith or believing in the unbelievable. It is also a story of putting aside our feelings of mortality and entrusting our lives to the Lord God, Ruler of the Universe.

A nurse friend of mine was anticipating some elective surgery. She was a staff member of an emergency room services team at a suburban health center. Life and death situations were not unknown to her. The upcoming surgery was needed to solve a hip problem that developed from injuries sustained some years ago in a major automobile accident. The accident was basically a head-on collision. Her car was totaled and it was a miracle that she escaped with her life. As it was, there were extensive injuries requiring surgical intervention. In an earlier conversation she had shown me pictures of the accident. All I could do was shake my head and say, “Thank God, it wasn’t any worse.”

Recurring pain was now becoming more frequent. It was becoming more difficult for her to move about, rest, or even sleep comfortably. This pain became an incessant reminder that something had to be done soon. The time came when it was necessary for hip injections of medication to calm the injured area. Increasingly pain management became the issue. She had to continue working in comfort and still fulfill other obligations prior to surgery.

Before the surgery was scheduled a myriad of related activities had to be accomplished. Getting approval from the medical insurer, arranging for disability income during surgery and the recovery, arranging for postoperative care and rehabilitation, cleaning the house, doing the laundry, contacting her associates, family, and friends, then arranging for the dog to be cared for at the kennel before she left.

The Monday morning of the surgery she was apprehensive. There was anxiety and concern whether everything would go well in the surgical procedure. I decided to email her a quick note.

“Yes, Monday is coming,” I said. “Here are some parting thoughts for you. It might sound a bit ‘heavy,’ but I believe that you will understand.”

“The Lord God Almighty is both Creator and Sustainer of life. I have seen life come into this world and life leave it. Either way it is a miracle. Something that science can’t really explain or duplicate. Perhaps this seems like understatement in this high-tech world of solid state electronic circuits, Mars rovers, and genetic engineering. Yet, in Genesis we are told that God created life from the earth and blew into pre-life forms the Breath of Life.”

“In the New Testament we see that the Almighty God empowered His only Son Jesus the Christ to heal the crippled and the sick, and to raise many from the dead.” We are reminded of this through two great examples, one from film and the other from the sacred choral literature.

There is a touching scene in Cecil B. DeMille’s 1927 classic movie King of Kings when Jesus enables a little blind girl to see once again. It is portrayed with all the pathos of unbelief and belief. Gradually her blurred vision emerges from darkness and becomes clearer as she sees the face of Christ. 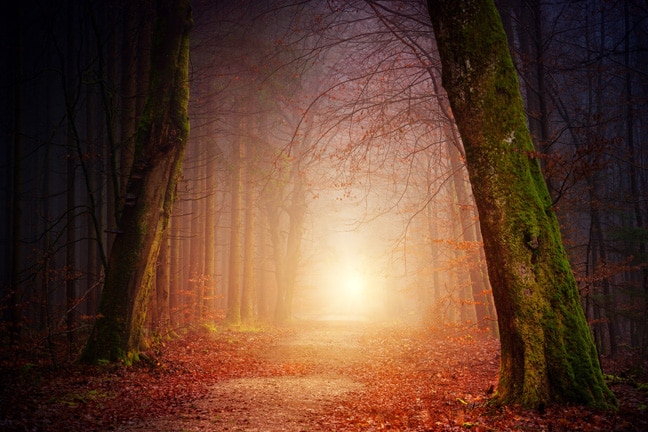 In one of the greatest choral works of the post-Reformation Era, Johann Sebastian Bach’s St. Matthew Passion, there is a marvelous scenario towards the end that concerns the raising of the dead. Following the crucifixion of Christ, at Golgatha during the Tumult, the Scripturally based oratorio says that graves opened, the dead became alive and the resurrected went into the city to tell of it.

Both of these examples tell us of things that are hard to understand. We wonder about it with 21st century minds. We wonder if such events were written by superstitious authors. That was then, but we live in the here and now. Is any of it believable? We pooh-pooh nonsense and try to stick to the facts. We have learned to let science be our guide in rational understanding of phenomena. So, our modern orientation is that of cause and effect. If something is broken we try to fix it. If we get sick enough, we go to a physician to find out what‘s wrong and get treatment.

It is when we are sick or need to see the surgeon, that we feel our mortality more acutely. Out of perfectly understandable fears, we center upon ourselves. We don’t like the change in our lives brought about by the health problem. Was the diagnosis correct? Is this the right surgical procedure? We are afraid of pain and suffering. We are also afraid of the unknown and putting ourselves into the hands of others who will be helping us.

Then we start to ask questions along this line. Why has this happened to me? What did I do to deserve this? Is this what the fortune cookie had in store for me all along? We tend to be fatalistic.

The typical individual might think that what happens in life is dicey, such as a visit to the casino. Like the great philosopher Blaise Pascal once found out, depending on the game there is a certain probability of winning or loosing. If one wins, one has good luck. If there is a loss, luck has turned and it’s just too bad. Yes, luck or chance follows the laws of nature. Nature’s laws must be reckoned with. We also reap what we sow. There are laws of God and we learn of these in His revealed Word in the Bible. Hence, life is not as fatalistic as we tend to interpret it.

“The Lord God, King of the Universe, never, never deserts us. He is there in our room wherever we are. The Divine guides the surgeon’s hand, and is with the operating team as well as the recovery room staff. All the time, God’s creation, the one in the hospital on the operating table, adjusts to all manner of changes during the course of the surgical and recovery procedures. Healing begins almost instantly. Life set in motion even before birth keeps going on, healing, and adjusting.”

“We live in the Grace of our Redeemer. The outcome is in the hands of the Lord and at His will. He is a God of love and compassion, wanting the best for His creation. I am a believer and know that His way is right, regardless, and that He listens to prayer. We pray in the hope that when we send our needs to Him, ‘What is loosed in Heaven shall be loosed upon Earth.’” That surely is believing in the unbelievable.

Yes there is both answered and unanswered prayer. The infinite wisdom of the Divine knows all interactions in every sphere of human endeavor as well as interactions with the animate and inanimate. Every conceivable scenario is known by Him in present and future time. When we leave something to God’s Will, we let the worry and concern of the situation lie in His hands. We let go. We trust in Him. We let Him work it out.

At this point in my note I began to let go, too, and proceeded to a conclusion. “In closing, I will be thinking of you in the coming days, and will send my deeply felt needs to Him on your behalf. You are a precious part of His creation.”

This story has a happy ending. First, there was the nurse’s reply. “How do you always know just the right words to say? The thoughts you sent were wonderful, comforting, and, of course, so true. I know those things to be true also, but one does get caught up in their own concerns when they’re not feeling well don’t they. Again, it should be so simple to let go, and let God take over — I won’t stop trying!!!”

We like stories such as this. God answered the prayers of many. The surgeon reported that everything went well that Monday and the patient was resting later that afternoon. Yes, life can seem dicey. All kinds of things could have gone wrong, but they didn’t.

We are dependent on the Providence of God. He and He alone knows our beginning and our end. He sent his Beloved Son Jesus Christ to take all our sins upon Himself. He was crucified as a common criminal by ancient Roman non-believers, then raised from the dead on the third day as promised. Because of this incredible Resurrection we too can have victory over death. That was His promise. All we have to do is believe in what we can’t see, hear, and touch: Christ our Savior. Repent of sin, do no evil, and lead a new life in Him. Help the poor, hungry, sick, and needy in our community. Talk to others about our faith and dwell in the Spirit of the Living God the rest of our lives.

Dr. James R. Powell is a retired scientist who serves as an ordained elder of the Presbyterian Church (USA) in Kalamazoo, Michigan.