The other day I heard my six year old talking with his friends about the future. When talking about what they were going to do when they grew up, one child said, “I want to be a father, like my dad.” “That’s not a job,” another child retorted. “Yes, it is,” came the reply. “Well, what does your father do?” the third child asked. “He takes care of me.” What better compliment could a father have?

When God sought a common way to describe Himself to us, He chose not a crown or a priestly robe. No, He chose the term “father”. I believe that we take God’s name in vain when we make by-words of the name of God. Words like “gee” and “gosh” are only abbreviations of profanity. For some, even the qualities and manifestations of God are violations of the third commandment. The Dutch word for “lightning”, for example, is considered by many to be a swear word because it refers to a manifestation of God.

Viewed from that perspective, what a fearful thing it is to take lightly the holy manifestation of God as revealed in fatherhood. Not only to misuse the word, but to misuse the very position given to those who portray that aspect of God must be against the will of our Father in heaven.

How can we truly fulfill so high a trust given to us as fathers? To whom should we look as our example? We must look, of course, to God. When God came to reveal Himself as our “Father”, He came as a Son. If we are to be true fathers, we must first be true sons, that is, true sons of God. A father may domineer and establish a tyranny that outwardly appears to be a firm grasp on fatherhood; but if he is going to instill respect instead of terror, he must first seek fatherhood through sonship. He must become a child of God the Father. 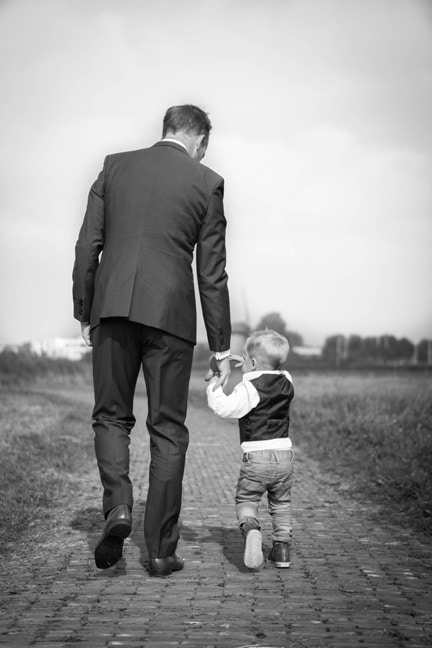 True, it is possible to toss out the foundation that demands we first honor God and still be a father. But the home that is built without such a foundation, although it may stand for a time, will collapse. Parental authority that does not rest in God’s authority cannot survive the tests of time. We must be faithful to Him who is our Father, receiving our authority from Him, if we are to maintain true authority within the home.

It is one thing, however, to say, “I will rule my home as a true father in the sight of my heavenly Father,” and quite another to carry out such a resolution. First of all, it is impossible to rightly rule our homes under our own strength. We need constant guidance in order to show leadership.

Such guidance comes from the Word of God. As fathers, we should not self-righteously claim, “My home maintains family devotions.” Rather, we must in all humility say, “Our family devotions maintain my home.” How often, in the busy-ness of life, we neglect the very thing that our homes need the most – time spent with our heavenly Father. It is time with the Father that will give fathers the instruction they need. In such a home children will know that the father’s authority is not in and of himself, but that he receives his authority from his heavenly Father, thus teaching them an effective example of respect for authority.

A home that is maintained by family devotions should also be in close relation with the activities of the church. In the past year, my teenage son and I attended the Men’s Bible Study sponsored by our church. Not only were we extremely blessed by the leader of the study, but several opportunities were made available for us to discuss different aspects of the lessons throughout the week. As fathers, we have the responsibility of teaching our sons their responsibilities within the church. If they are to be the future leaders of the church, we must lead them to an understanding of the importance of the church in their lives. One easy way to do that, and receive a blessing ourselves, is to get them involved in the activities of the church. The best way to get them involved in the church is to be joyfully involved ourselves.

In all likelihood, there will be days when discipline of one kind or another will be required. Sometimes this can be the most difficult task the father must perform in his role as father and spiritual leader of the household.

A final aspect that we fathers must learn from our Father is that of forgiveness. There will be times when our children will hurt us emotionally.

They will do things that will be difficult for us understand. The father who has lived in the everlasting love of his Father and has himself experienced the grace of God that leads to forgiveness, will not give up on his children. He will always be there for them, always show them his love, and he will always be ready to forgive them when they ask for it.

An earthly father is human and fallible. As his children grow older, they will see that he is not free from error, nor his life free from sin. If, through their growing years, the father has maintained his own sovereignty rather than acknowledging that his authority comes from God, his children will rebel against him as they notice his inabilities. If, however, he renders himself in obedience to his Father the children will view him as a child of God placed in charge their household. As fathers, let us seek to live up to the title given us by our Father.