Many of us may struggle with the feeling that the church is already too old-fashioned. If so, why should we study church history? Shouldn’t we stop looking backward to the sixteenth century and start living in the twenty-first century?

Contrary to our concerns, the church has always realized that a forward-looking church is also a backward-looking church. Likewise, well-balanced, progressive Christians will be students of church history. The Bible supports this. Christianity, as revealed in Scripture, is inescapably a historical religion. The Christian conception of time itself is linear not cyclical. That is, time has a beginning, a middle and an end. It is within this spectrum of time that the great themes of the Bible are all rooted. The creation, fall, redemption and restoration of humanity are not merely ideas; they are real events that remind us of the importance of history. 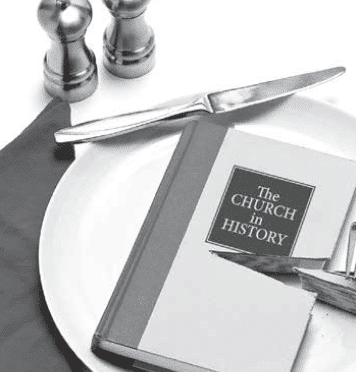 Most Christians would agree that it’s important to study this history, that is, the Bible’s history of redemption. But God’s actions in history are significant and worthy of study whether they are recorded in Scripture or not. Consider the words of the Psalmist: “I remember the days of old; I meditate on all your works; I muse on the work of your hands” (Psalm 143:5, emphasis added). Along the same lines, the apostle John ends his Gospel with these words: “And there are also many other things that Jesus did which, if they were written one by one, I suppose that even the world itself could not contain the books that would be written” (John 21:25). We don’t know all of those works, but they are real history, as are all the other works of God.

The word “remember” is used 164 times in 39 of the 66 Bible books. In repeating this word, God is saying, “Don’t neglect the past.” Or as C.S. Lewis so memorably put it, “Don’t be a chronological snob,”1 only valuing the era in which you live. Henry Ford exemplified such snobbery when he said, “History is bunk.” It’s not. Instead, it’s filled with meaning that God calls us to learn in our day.

In 1 Corinthians 10, Paul reviews a portion of Israel’s history, particularly their exodus from Egypt and their subsequent desert exile. Paul tells us in verse eleven that “all these things happened to them as examples, and they were written for our admonition.”

Similarly, Stephen’s sermon (Acts 7) is one monumental history lesson. It begins with the call of Abraham, moves to the people’s bondage in and deliverance from Egypt, and an account of the construction of the tabernacle and temple. The point of this lesson is that the Jewish leaders have not learned from history. Instead they have perpetuated the sins of their fathers.

Not only are we to learn from history, we must also be teachers of history. Psalm 145:4 says, “One generation shall praise our works to another, and shall declare your mighty acts.” The result of this command to teach God’s history is recorded in Psalm 44:1. “We have heard with our ears, O God, our fathers have told us, the deeds You did in their days, in days of old.”

History’s beginning is recorded in Genesis 1 and its end in Revelation 22. Everything that happens between can be linked to a work of God and is worthy of study by his children.

There are also practical considerations that urge us to study God’s history.

The following six reasons help demonstrate the value of learning from and teaching history.

Appreciate the Sovereignty of God

If you were to spend just one hour reading an accurate overview of church history, you might wonder how the church has continued to exist at all. From the Roman persecutions of the first three centuries to the Spanish Inquisition of the sixteenth century to the Armenian genocide in the twentieth century to the unholy war presently being waged against Sudanese Christians, the church has undergone tremendous opposition.

The study of church history helps us understand Christ’s words when he said, “I will build my church, and the gates of hell shall not prevail against it” (Matt. 16:18, cf. Belgic Confession, Art. 27).

We look to the practices of the early church to help us understand such important issues as church membership, baptism, worship, and government involvement.

For example, how do we know on which day we should rest from our labors and join together with other believers for worship? Not everyone agrees that the Bible answers this question with absolute clarity. But when we consider that the early Christians worshipped on the first day of the week and that this pattern has continued in a nearly unbroken string for 2,000 years, it lays a very strong precedent for modern churches to consider.

Defend Against Heresies and Cults

Take Athanasius for example. He fought a vigilant battle in the fourth century against the teachings of Arius, who denied that the Son is essentially equal to the Father. In the mind of Arius, Christ was neither fully God nor fully man, but belonged to an entirely different category.

Athanasius argued that only by the real Godhead coming into union with the full manhood in Christ could fallen men be made right with God. In other words, Jesus can only save if he is God.

Given that the Jehovah’s Witnesses are modern-day, self-conscious followers of Arius, understanding Athanasius’s arguments (especially in his book On the Incarnation) is extremely valuable today.

Resist Being Captivated by Fads

Author Brett McCracken has outlined the modern church’s obsession with trendiness. Many churches today are desperately trying to overhaul their image to be more hip. Churches seek to impress by embracing cultural fads of style, technology, music, movies and even shock-jock approaches to sexuality.

Responding to this approach on behalf of the younger generation, McCracken says with confidence, “When it comes to church, we don’t want cool as much as we want real. If we are interested in Christianity in any sort of serious way, it is not because it’s easy or trendy or popular. It’s because Jesus himself is appealing, and what he says rings true. It’s because the world we inhabit is utterly phony, ephemeral, narcissistic, image-obsessed and sex-drenched—and we want an alternative. It’s not because we want more of the same.”2

“Church history tends to [help us] separate the transient from the permanent, fads from basics.”3 To paraphrase Isaac Newton, Christians transcend fads by standing on the shoulders of the giants of the faith who have gone before.

Ever wonder why, in some churches, when a minister gives a call to repent and believe the room becomes filled with sentimental music? Those stirred by religious sentiment are encouraged to come forward to make a decision. Why?

Likely, these are a few remnants of Charles Finney’s nineteenth-century revival techniques, which at the time were considered “new measures” of evangelism. There was, of course, a theological reason for the introduction of these new measures. Finney believed that God could not regenerate a person without that person’s help. From this context it makes sense to encourage people to “give God permission” to save them.

A more expansive view of history would help us to understand that true revivals have come about not by novel advertising techniques or psychological manipulation but by the regular, powerful expository preaching of God’s Word.

Isaac Watts, the eighteenth-century British hymnist, asks a number of powerful questions, making the point that the study of church history can be a spur to faithfulness:

“Am I a soldier of the cross, a follower of the lamb, and shall I fear to own his cause, or blush to speak his name? Must I be carried to the skies on flowery beds of ease, while others fought to win the prize and sailed through bloody seas? Are there no foes for me to face? Must I not stem the flood? Is this vile world a friend to grace, to help me on to God? Since I must fight if I would reign, increase my courage, Lord; I’ll bear the toil, endure the pain, supported by Thy Word.”4

Until the Lord comes again, the church is appropriately called the church militant. Many before us have fought well. But the fight continues.

William Boekestein is the pastor of Coveant Reformed Church (URCNA) in Carbondale, PA.