Readers of The Outlook may be familiar with Henry Coray’s,

Against the World: The Odyssey of Athanasius (1992). This is a brief (yet commendable), popular, fictionalized biography of the champion of Nicene orthodoxy. Inveterate defender of the creed of Nicaea (325 A.D.), Athanasius has been revered by the church catholic for his unswerving insistence on the essential deity of the Son of God. This insistence was not without cost. Five times he was banished from his church, fleeing for his life to be protected or secreted by his friends. At several points in his career it seemed as if he alone stood for orthodoxy; hence the phrase Athanasius contra mundum (“Athanasius against the world”).

However, modern church historians of fourth century Christologial controversies are revising the traditional portrait of Athanasius by labeling him, among other epithets, “a liar”, “gangster”, “violent political manipulator”. Revisionism, like the poor, is ever with us; unlike the poor, revisionists are ever driven by agendas. The current revisionist agenda vis-ã vis Athanasius is the unabashed rehabilitation of his antagonist Arius of Alexandria, Egypt. Contemporary revisionist historians have placed a white hat on the head of this traditional heretic, even though Arius was roundly condemned by the First Ecumenical Council at Nicaea. Revisionists, so we are informed, have (re)discovered the ‘orthodox’ Arius and (surprise! surprise!) he is more ‘orthodox’ than his nemesis, Athanasius (who increasingly wears a black hat). The Christology of Arius as well as his soteriology is viewed as more Scriptural than that of Athanasius. 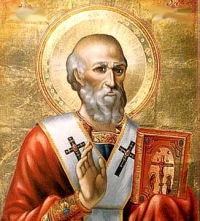 The upshot of all this revisionist ink is that Nicene orthodoxy triumphed after 325, not because it was biblical, not because it was right, but because of political might. The emperor Constantine was eager to consolidate his Christian political power through the display of his own magisterial theological savvy. Nicaea was the theological tool in advancing the imperial agenda. Revisionists quickly point out that it was not coincidental that Constantine attended the Council of Nicaea. He was there to advance his own “imperial theology”.

All of this should cause us to review the traditional orthodoxy which we confess when we use the Nicene Creed in worship.

Arius, a young presbyter in Alexandria, began to raise the eyebrows ofhis supervising bishop Alexander, also of Alexandria, when he announced that the Son of God was acreature. It is clear and uncontro-verted that the famous statement “there was a time when he (the Son of God) was not” came from Arius’s lips and pen (the primary source is Arius’s Thai/a [“The Banquet”]; see also Arius’s letter to Eusebius of Nicomedia). If there was a time when the Son of God was not in existence, then it follows that He was made or created at a point in time. Once, the Son of God was not; then He was. In other words, once upon a time, God was alone – no other divine person existed alongside Him, And then, this lone God created a Son so as to have Him become, for the first time, a Father. Thus, God was not always Father; once, before the creation of the son, He was only God. Bishop Alexander and his young deacon, Athanasius, were alarmed. To reduce the Son of God to a created being (even the highest created being) was unbiblical. It was to deny the Trinity, to affirm a Unitarian concept of the Godhead and to reject three persons in one essence. At the Council of Nicaca, the fathers of the church affirmed that the Son of God was “begotten, not made” thus not a creature. They further affirmed that the Son was “of the same substance” (Greek, homoousios) as the Father with respect to His essence. Consubstantial (i.e., equal in substance) essentially; begotten, not made, personally.

Athanasius wrote an important book (On the Incarnation of the Word) in which he explained the biblical doctrine of the deity of the Son. The eternal Word (Logos) becomes man (incarnate) in order to bring men and women to God (cf. Jn. 1:14). Athanasius realized that the question “Who is Jesus?” was intimately related to the question “How shall we be saved?” If the Son of God were a creature (as Arius maintained), salvation would be impossible. A creature could not save a creature. To be rightly related (or united) to God would take God rightly related (or united) to human nature. Hence the incarnation for Athanasius was a paradigm of mankind’s salvation: God and man united. If the Savior is not God incarnate, there can be no salvation. Athanasius was persistent in defending the essential or consubstantial deity of the Son of God because he deemed this truth essential to the salvation of sinners.

Arius’s answer was “by imitation”. A very good creature (Christ) provided the pattern for goodness for human creatures. Arius’s notion that Jesus possessed a mutable nature (“the Word/Logos himself also is subject to change”) and that He (as a creature) earned His heavenly reward by choosing good amounted to a reduction of grace. Grace was no longer a divine or heavenly intervention to remedy human helplessness. Grace (for Arius) was the merit of a mere creature now held out as an example of “salvation” for other creatures. To Athanasius and the other defenders of Nicaea, this was a counsel of despair: “What help can creatures derive from a creature that itself needs salvation?”

Athanasius not only opposed the world with respect to the essential deity of the Son of God, he also recognized the implications of a “Savior” who was a mere creature. Only if God Himself condescended to unite human flesh to His own divine nature could sinful men and women ever hope to be united to God “He became sin for us and a curse, though not having sinned Himself, but because He Himself bare our sin and our curse.”

We are deeply indebted to Athanasius, not only for enunciating more clearly than ever before the homoousios of our Savior: we are indebted to him for defending the biblical doctrine of salvation as union with Christ (and God, the Father, through God, the Holy Spirit) via incarnation.

Revisionists may rehabilitate Arius. But the person of the Son whom they represent is incapable of saving other sinful Creatures. Athanasius understood this and so we too stand with the great Alexandrian contra mundum (if necessary).