A few years ago a young woman named Sarah wanted to become a member of the congregation I pastored. She grew up in a Roman Catholic family. We sat down together with a couple of others and studied the Heidelberg Catechism as part of a new members’ class. When we got to the section dealing with the sacraments, she asked if she would have to be baptized again to become a member of a United Reformed Church. After further inquiry, I told her no, she did not have to be rebaptized. But why that conclusion? The question we must answer as we think about this subject is this: Is a Roman Catholic baptism a true, Christian baptism? The answer is yes. 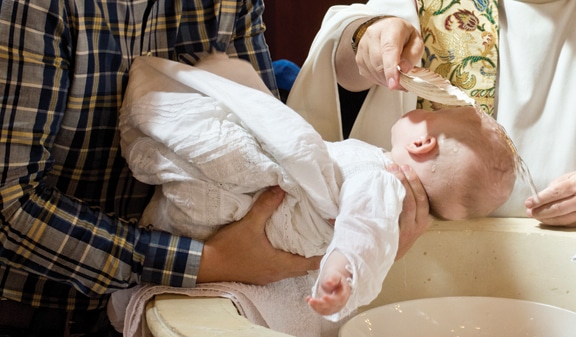 What constitutes a Christian baptism? In summarizing the Scriptures, Article 34 of the Belgic Confession of Faith mentions three things which must be present: the recipient is to be baptized with “pure water,” “in the name of the Father, and of the Son, and of the Holy Ghost,” and by a minister (WCF XXVIII; WLC Q&A 165–67; HC Q&A 71). Theologically, the three elements which make up baptism involve its matter (must be water), form (using the trinitarian formula), and design (it is a sacrament which signifies and seals and is done by a minister of Christ). That all seems simple enough, but there is a problem.

There have been some objections to the validity of Roman Catholic baptisms. In the middle of the nineteenth century, American Presbyterians were having this discussion. The prominent figures were J. H. Thornwell (d. 1862) and Charles Hodge (d. 1878). Thornwell, and those who sided with him, argued against the validity of Roman Catholic baptism. Hodge, and those who walked in his theological footsteps, argued the opposing side. Though a number of arguments were offered by Thornwell (including the impurity of the water used by Roman Catholics, and other wrong views they had of the sacrament), the main hinge of the argument was centered on the question of whether a priest is a minister of Christ. After all, if the Roman Catholic Church is a synagogue of Satan, how can its ministers be true ministers of Christ? The Westminster Confession of Faith (1647) in Chapter 28.2 says, “The outward element to be used in this sacrament is water . . . by a minister of the gospel, lawfully called thereunto.”

In more recent history, the Presbyterian Church in America wrote a study report on the subject. The majority sided with Thornwell, and the minority sided with Hodge. Historically, the Reformed have accepted Roman Catholic baptisms. What we must ask at this point is, “Should we continue to accept their baptisms?”

Yes, we should continue our practice of accepting Roman Catholic baptisms. This is not in any way an endorsement of their unbiblical views of baptism. For example, they believe baptism is necessary for salvation, that it has an efficacy unto salvation, that holy water must be used, and so on. The reason we should accept their baptisms is because the three necessary elements to a proper baptism are present: the matter, the form, and the design.

As to the matter, water is used. It might be water blessed by the pope and sanctioned by the Roman Catholic Church, but it is water. It is not oil, wine, sawdust, or ash; it is water. The matter is correct.

As to the form, the trinitarian formula is used. In Matthew 28, Jesus sent out the disciples to go and make disciples. Part of that work of disciple making was to baptize them into the name of the Father, Son, and Holy Spirit. The Roman Catholic Church uses the same formula in its baptisms as Reformed churches use.

As to the design, the Roman Catholic Church does view baptism as a sacrament. They also view it, in a similar way, as a sign and seal applying the benefits of salvation. Their view of the efficacy of baptism (that grace is automatically given, and the recipient is placed into a state of grace because of the baptism) is the real issue. Closely connected with this is the person administering the sacrament. Does baptism depend upon the merit of the one performing it?

Those who followed Thornwell argued that a Catholic priest is not a lawfully called minister of God. Hodge argued that priests are true ministers. It is the hierarchical structure, and ultimately the papacy, that shows the Roman Catholic Church to be a synagogue of Satan, Hodge argued. However, locally, the priest is called by a particular community of those professing faith in Christ. What this means is that a Catholic priest performing a baptism is different from your older brother baptizing you in a bathtub when you were children. Something official is taking place.

John Calvin deals with this question in chapter 15 of the third book of the Institutes. There is a reason why Calvin was not rebaptized after the Reformation took place, and the reason is our defense as well today. In baptism, it is the Lord who places His seal upon the baptism, regardless in that sense whose hand performs it.

Calvin gives the illustration of reformation under King Josiah and King Hezekiah (2 Kings 18; 22; 23). Though wicked hands performed the circumcision of thousands, these faithful kings did not call for a second circumcision. The same is true for us. Whether it is a priest or a female pastor performing the baptism, the beauty of the sacrament is in the person speaking. That person is God.

The nature of the sacrament itself keeps us from seeking to rebaptize those who become Reformed after having come from the Roman Catholic Church. In baptism, it is God who makes a promise to the child. The promise given in the sacraments is “to forgive our sins and give us eternal life by grace alone because of Christ’s one sacrifice finished on the cross” (HC A 66). That promise is the same whether someone was baptized by the pope or by your pastor. Baptism is a covenantal claim of a child to be identified with God and to be a member of His church and people.

The acceptance of Roman Catholic baptisms has been less of a debate for those from the Three Forms of Unity tradition than it has for the Presbyterian (WCF) tradition. Nevertheless, it is important to know where we stand on the issue because it ought to be our prayer that we will be faced with this scenario very often. When Sarah, the young woman who was baptized Roman Catholic, became a member of our congregation, she made profession of faith. She was not rebaptized, and the reason why is because she had already received a water baptism, in the name of the Trinity and performed by a priest. The promise of God was given to her in her baptism, and when she confessed her love for the Lord, that promise was publicly realized by the congregation. As a congregation, we rejoiced with her and praised God for His gracious sacramental promise, which was given to her and to us all in our baptisms.

Rev. Steve Swets is the pastor of Rehoboth United Reformed Church in Hamilton, ON.