The elections of November 8, 1994, who will forget them? They could be the beginning of a new direction in the governing and public life of the United States. Time will tell. They awakened many political leaders as to where many citizens want this country to go. All kinds of advice is now being given to our leaders: smaller government, family values, tax-breaks, welfare-reform and term limits. The day after the elections, a local newspaper caught my attention with this headline on the front page: “Move to the Right.”

As Reformed Christians we are able to offer even better advice, not just to leaders, but to all citizens. In fact, its not just political advice; it’s what the Bible calls wisdom. Psalm 33:12 says, “Blessed is the nation whose God is the Lord, the people He chose for His inheritance” (NIV). This was immediately applied to the nation Israel. However, the principle that God gives His blessing on those nations who fear and honor Him still applies. The Bible’s wisdom and advice then for our situation would be: “America: Move to the Right One!”

ACKNOWLEDGING THE GOD OF THE BIBLE

What would moving to the Right One mean? First, it would mean acknowledging the God of the Bible. The Bible doesn’t say, “Blessed is the nation whose God is Mohammed, Buddha, science, or whatever one chooses to be his or her own personal higher power.” The emphasis of this text as well as the whole Bible is that Jehovah alone is God. There are no other gods but the Lord. Psalm 105:1 calls on us to make known among the nations what the Lord has done. King Nebuchadnezzar enforced a strict penalty for not taking the God of Daniel seriously and respectfully since no other could save in a way that Daniel’s God could. That decree was directed for people of any nation or language.

Moving to the Right One in America would also mean taking the God of the Bible seriously in our institutions and public life. Does this sound radical and controversial? Perhaps. It wasn’t for many of this nation’s founders and leaders. The Mayflower Compact states:

…having undertaken, for the glory of God and the advancement of the Christian Faith and the honor of our King and country, a voyage to plant the first colony in the northern parts of Virginia, do…in the presence of God and of one another, covenant and combine ourselves together into a civil body politic…1

That doesn’t sound like the beginnings of a secular humanist society. Patrick Henry who is well known for his statement, “Give me liberty or give me death,” also said:

It cannot be emphasized too strongly or too often that this great nation was founded, not by religionists, but by Christians, not on religions, but on the Gospel of Jesus Christ! For this very reason people have been afforded asylum, prosperity, and freedom to worship here.2

The Supreme Court case, Church of the Holy Trinity vs. United States 1892, made this statement:

Our laws and our institutions must necessarily be based upon and embody the teachings of the Redeemer of mankind. It is impossible that it should be otherwise; and in this sense and to this extent our civilization and our institutions are emphatically Christian…This is a religious people. This is historically true. From the discovery of this continent to the present hour, there is a single voice making this affirmation…we find everywhere a clear recognition of the same truth…These, and many other matters which might be noticed, add a volume of unofficial declarations to the mass of organic utterances that this is a Christian nation.3

Our nation today would do well if the newly elected leaders would be as convicted as the Supreme Court was in 1892. Blessed is the nation who fears the true God.

Second, moving to the Right One means obeying God’s commands. New laws and policies will certainly be enforced with the newly elected leaders. What America desperately needs are leaders who will base their decisions on principles of God’s moral law. The Ten Commandments would be a great start! 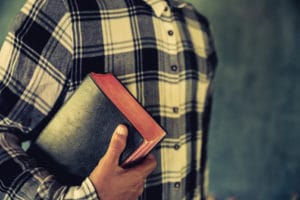 Wait a minute! What do you mean? You can’t legislate morality! You can’t force your religion and values on others! This is a free country! Sound familiar? Think about it. Legislation and laws always have a moral dimension. For example, Congress passed a clean air bill. This was done to protect the environment. It will cost industry millions of dollars. People’s freedoms are limited in order to provide cleaner air. Cleaner air then is the “good,” the moral cause, for which industries must obey the laws passed in the clean air bill. Speed limit signs serve as another example. Laws are passed and enforced to limit driving freedoms for the protection and safety of people. Driving a certain speed is the law, and concern for safety is the moral cause which that law is based on. Virtually every act of law (ruling policy, executive order, library book fine, etc … ) is the legislation of someone’s morality. The real issue and the real question is, “Whose morality will be the basis for our decisions? Truth is not neutral! If we don’t legislate moral behavior, we end up legislating immoral behavior.

As to the standard by which a nation should choose for moral behavior, the Ten Commandments are a great place to begin. If you were the inventor of some machine, you would be the best person to consult on how it works and how to fix it if something went wrong. God is the Creator of life. He knows best how life works, and when things go wrong, only He knows how to fix it. God tells us how life works best in the Ten Commandments. What is so objectionable about honoring God, protecting and encouraging the free exercise of worship, protecting and promoting our neighbor’s life, honoring marriage, protecting someone else’s possessions, speaking the truth in love, promoting contentment? Many are finding out that these commands are not objectionable, and life really does work well when people obey them.

Again, some of our founding fathers believed that God’s laws weren’t so objectionable either. Our first president: George Washington said: “It is impossible to govern rightly without God and the Bible.”4 Calvin Coolidge revealed his agreement with God’s standard of moral right and wrong when he said:

… the foundations for our society and our government rest so much on the teachings of the Bible that it would be difficult to support them if faith in these teachings would cease to be practically universal in our country.5

David Barton reveals in his book, The Myth Of Separation, that the university of Houston conducted a 10-year study on what influenced the thinking of our forbearers. 10 years later, with more than 15,000 documents examined, the results were in 94% of the writings which formed the foundation of our nation were based on the Bible; 34% were direct Bible quotations; and 60% were from men who based their ideas directly on the Bible. The book of the Bible most often quoted by our founders was the book of Deuteronomy.6 On the north wall of the Abraham Lincoln Memorial are these words from his Second Inaugural Address: “As was said 3000 years ago, so it still must be said, ‘The judgments of the Lord are true and righteous altogether.’”

Moving to the Right One means having leaders who make and enforce laws, not first and foremost because it is their personal opinion, but be· cause their decisions are grounded in principles that the almighty Creator has told us is for a good and orderly society. I listened to a political debate prior to the elections. The issue of abortion was the subject. One candidate made it clear he was “pro-choice.” The other said, “Personally I am opposed to abortion.” I am thankful that one candidate was opposed to abortion. In leadership roles however, at such a time as this, we need to get beyond just mentioning our personal beliefs. We need leaders who will explain what those beliefs are based on. In this particular case, we need leaders who will say, “I’m opposed to abortion because it is a violation of God’s moral law, and therefore I will do what is in my power to pass laws that will honor life.”

Finally, moving to the Right One means that we as a nation must place our trust in God to bless us as we honor Him. On our currency we read these words: “In God We Trust.” That took wisdom for our forefathers to place that reminder there for all of us. So often today the bottom Line is money. If there ever was a temptation to place our trust in something alongside of or in place of the true God,money would be it. To be sure we need it, we must work hard for it, and we must be generous with it. But we must not let it control and enslave us. God’s truth is what must govern our economics. For much too long we have demanded seven working days from too many people in order to make a profit. Is our country better off for ignoring God’s fourth commandment? Money is just one of many instances where misplaced trust can bring a nation to dismal failure. Science, technology, medicine, art, foreign affairs and many other fields of expertise need the light of God’s Word. Ben Franklin, in the Constitutional Convention of 1787 summarized it well:

And have we forgotten that powerful friend? Or do we imagine that we no longer need his assistance? I have lived, Sir, a long time, and the longer I live, the more convincing proofs I see of this truth: that God governs the affairs of men. And if a sparrow cannot fall to the ground without his notice, is it probably that an empire can rise without his aid? We have been assured, Sir, in the Sacred writings that ‘except the Lord builds the House they labor in vain who build it.’ I firmly believe this; I also believe that without His concurring aid we shall succeed in this political building better than the builders of Babel; we shall be divided by our little, partial local interests; our projects will be confounded; and we ourselves become a reproach and a byword down to future ages. And what is worse, mankind may hereafter from this unfortunate instance despair of establishing government by human wisdom and leave it to chance, war or conquest. I therefore beg leave that, henceforth, prayer imploring the assistance of heaven and its blessing on our deliberation be held in this assembly every morning before we proceed to business.7

Moving to the Right One, however, all begins with individuals, families and churches of a nation which honors the Lord. We cannot look to political leaders to do our Christianity for us. To be sure we would be blessed if we had leaders courageous enough to honor God in their governing. But nations are made up of people. What a calling and opportunity then for God’s people to continue the hard work of preaching and living the good news of Jesus Christ! If you are working with someone now, helping him or her move to the Right One, don’t quit. Don’t become weary in doing good. If you are not, pray to the Lord for an opportunity to make a difference in someone’s life by leading them to the Right One.

A newspaper may give advice for politicians to move to the right, but the good news of the Bible is for all to move to the Right One. Move to the Lord Jesus Christ and His commandments, for blessed is the nation whose God is the Lord.

C.J. den Dulk is the pastor of the Sparta Christian Reformed Church.