The following statements of evangelical belief are offered as material for dialogue between Roman Catholics and Evangelicals, as a follow up on the recently published document, “Evangelicals and Catholics Together: The Christian Mission in the Third Millennium,” drafted by Richard John Neuhaus and Charles Colson with others. We the undersigned offer this response in a spirit of irenic debate on issues arising from that important joint-statement. As that document was crafted to encourage cooperation on the basis of a consensus deemed sufficient for the purpose, though confessionally incomplete, so the following statements seek to identify issues of concern to evangelical Protestants that the thrust of the document raises. What follows is intended to encourage further discussion of the possibilities and problems of acting together. 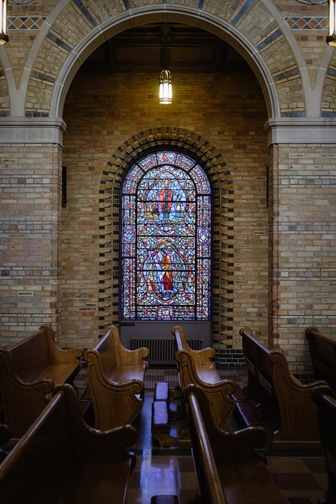 1. While both Evangelicals and Roman Catholics affirm the ecumenical Creeds, we do not see this catholic consensus as a sufficient basis for declaring that agreement exists on all the essential elements of the Gospel.

2. The doctrine of justification by grace alone through faith alone because of Christ alone has since the Reformation been acknowledged by mainstream Protestants as “the article by which the church stands or falls,” and the tenet that distinguishes a true from a false church. While affirming an indissoluble bond berween justification and sanctification, this doctrine insists that justification itself is God’s present forensic declaration of pardon and acceptance, and that the righteousness required for this declaration is neither attained by human effort nor infused or worked internally by God in the human soul, but is the righteousness of Jesus Christ imputed to those who believe. The Council of Trent anathematized those who embrace this doctrine; and all subsequent magisterial declarations, including those of the Second Vatican Council, continue to bind Roman Catholics to the conviction that this Gospel of free justification by faith alone, apart from works, and the assurance of salvation that springs from it, are not consonant with Roman Catholic teaching. While gladly noting in modern Roman Catholic exposition a growing emphasis on Christ and the biblical promises as objects of faith and trust, we see justification by faith alone as an essential of the Gospel on which radical disagreement continues, and we deny the adequacy of any version of the Gospel that falls short at this point.

3. Furthermore, while rejoicing in our agreement that God in the Gospel offers salvation in Christ to all who will receive it, we radically disagree with the teaching of the Second Vatican Council that unbelievers may be saved by their good works, apart from faith in Christ.

4. The extent of the creedal consensus that binds orthodox Evangelicals and Roman Catholics together warrants the making of common cause on moral and cultural issues in society. Roman Catholics and Evangelicals have every reason to join minds, hearts and hands when Christian values and behavioral patterns are at stake. Yet it is incorrect to regard such cooperation among Christians as common ecclesial action in fulfilling a common ecclesial mission. The mission of the church as such is primarily the fulfilling of the Great Commission of Christ through the ministry of Word and sacraments; and cultural, moral, political and social concerns in which Christians rightly engage, must not be thought to determine the relationship of ecclesial communions, or allowed to become decisive in the setting of their respective agendas.

5. We affirm that Christ’s prayer for unity requires vigilant patience and diligence as we seek a greater visible unity. We deny that this prayer refers merely to the spiritual or invisible church. We further affirm that the unity we seek is shaped, bounded and controlled by the teaching of the canonical Scriptures, the written Word of God, comprising the Law and the Gospel in its message of reconciliation with God and new life in Christ. To this Word the church must submit and by it must correct its understandings, so that its unity will be unity in truth. The Roman Catholic Church claims to be graced with an infallibility that attaches to conciliar declarations and Papal pronouncements ex cathedra, such that these are in principle irreformable, and must be treated as decisive guides to the theological interpretation of the Bible. We deny that the defined doctrines of the church’s infallibility, Papal primacy, justification according to Trent, transubstantiation and eucharistic sacrifice, and the immaculate conception and assumption of Mary, can be proved from Scripture, and we cannot accept any form of joint action that appears to imply agreement with them. Also, we deny that visible unity has been or can be achieved where a common confession of the Gospel in all its essential elements is lacking.

6. We affirm that individual Roman Catholics who for whatever reason do not self-consciously assent to the precise definitions of the Roman Catholic Magisterium regarding justification, the sole mediation of Christ, the relation between faith and the sacraments, the divine monergism of the new birth, and similar matters of evangelical conviction, but who think and speak evangelically about these things, are indeed our brothers and sisters in Christ, despite Rome’s official position. We perceive that the Roman Catholic Church contains many such believers. We deny, however, that in its present confession it is an acceptable Christian communion, let alone being the mother of all the faithful to whom every believer needs to be related.

7. We affirm that the Great Commission of our Lord requires every Christian and every congregation to be engaged in witness to Christ, and that this is concerned not merely with conversion, but with the catechesis, nurture, and discipline of converts. Therefore, we deny that it is advisable to imply that whether one is in a church where the Word is rightly preached and the sacraments are rightly (that is, biblically) administered is no longer important; and we insist that every Christian, Roman Catholic no less than Protestant, needs regular exposure to accurate, Christ-centered preaching and exposition of the Bible.