Whenever in biblical times Jewish people would travel to Jerusalem to celebrate one of their feasts, they sang the songs of ascents recorded in Psalms 120 through 134. Singing these psalms, they expressed their joy in the Lord God as they came closer to the city and eventually arrived at God’s temple.

When we approach God in worship, we must do so by gathering with fellow worshipers in a spirit of unity and harmony. The psalmist sings, “How good and pleasant it is when brothers [and sisters] live together in unity!” (Ps. 133:1). We acknowledge that the closer we come to God the more harmonious we should be in relationship to our brothers and sisters in the Lord. Wherever this characteristic is evident, worshipers sense not only God’s goodness and blessings but also his nearness. We know that it is impossible to worship God when constant strife and enmity are present among his people, for then God withholds his blessings.

The psalmist illustrates delightful unity and peace among the worshipers by portraying Aaron in his role as high priest. He writes, “It is like precious oil poured on the head, running down on the beard, running down on Aaron’s beard, down upon the collar of his robes” (Ps. 133:2).

At first sight this picture has nothing in common with our times and culture. It does not speak to us and is utterly foreign. Yet when we put the picture in its historical setting and examine it, we begin to see the meaning of oil running down the head and clothing of the high priest.

God anointed Aaron as high priest for the task of presenting Israel’s praises and petitions to him. Aaron could serve God in that capacity after he had been properly ordained. The ceremony of ordination demanded that he be drenched with precious oil that would cover his head, saturate his hair and beard, and drip down onto the collar of his robe.

The oil stood for holiness that signified total consecration to God. Aaron had to think that which is pure, speak that which is true, and do that which is right. His every thought, every word, and every deed had to exemplify holiness.

In the same vein, unity, harmony, and peace must saturate God’s people so that the world is able to see our Christian walk of life. We are living, as it were, in a glass house and everyone on the outside is able to see and even hear us. Hence, the guideline for any Christian is to live in the very presence of God and joyfully sing, “So shall no part of day or night from sacredness be free, but all my life, in every step, be fellowship with Thee.” 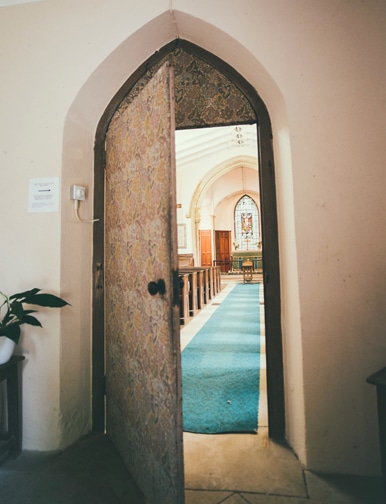 The psalmist provides a second illustration, “It is as if the dew of Hermon were falling on Mount Zion. For there the Lord bestows his blessing, even life forevermore” (Ps. 133:3). Dew descends nightly on Mount Hermon and the land of Israel to refresh and replenish all vegetation, animals, and insects. The dew is so heavy that moisture steadily falls in large drops on all plants insects, and animals. Thus they are supplied with the necessary moisture to withstand the heat of the next day and flourish. Dew comes silently and inconspicuously; it nourishes and revives God’s great creation. When Mount Zion, located at one of the higher places in Israel, receives the same dew that descends on Mount Hermon, the result is uncommon fruitfulness.

Similarly, when we in our Christian community display the characteristics of peace, harmony and unity, God’s blessings descend on us quietly, unobtrusively, and profusely. God strengthens us for the task to which He has called us. He literally places His material gifts next to us to sustain us in our daily life. In addition, He also grants us spiritual gifts, especially eternal life. In our own strength we come to failure, and consequently we readily admit that we are totally dependent on our heavenly Father. The prophet Jeremiah eloquently expresses this by saying, “Because of the Lord’s great love, we are not consumed, for His compassions never fail. They are new every morning; great is your faithfulness” (Lamentations 3:22–23).

Dr. Simon J. Kistemaker is a retired professor of the Reformed Theological Seminary in Jackson, Florida. He currently resides in Oviedo, Florida.