When Jeff Steinberg was born, his father ordered that the mother be told nothing about the little boy’s condition. Jeff had no arms, and his legs were so malformed that they could not support him. His boyhood was spent in hospitals and homes, including one period in a foster home and a short, unsatisfactory stay with his own parents. At this writing, forty years later, Jeff is four feet tall. He hobbles around on legs that he dons every morning. Using his hook arm, he does everything, including driving his car and painting. In fact, he painted the design for the shirt I’m wearing. He owns his own home, has been married and divorced, and has a grown son. Much of his time is spent speaking to such groups as the Maine Right-to-Life Convention, where I met him. He has a powerful and beautiful voice and sings along with his message.

The thrust of Jeff’s message is the sentence on my shirt: “I am a masterpiece in progress.” Because Jeff is a triumphant Christian, he points his audience to the truth that no matter what we appear to be, with our handicaps, our tragedies, our failing bodies, our deep aches, and our sins, if we are God’s children through faith in His Son, we are masterpieces in progress. When God is finished with us and we are in His presence, we will be complete—true masterpieces—because we will be like Jesus. This is the message the aging need. This is the message with which the church can equip them.

The church has two main ways to impart this message, which in theological terms involves sanctification and glorification. The first way is by precept, or exposition. The church can and should be teaching every generation what it means to be a work of God that He will one day perfect. and what it means while we are younger to honor the aging. Second, the church can and should be practicing what it preaches by being a model and by itself honoring the aging. 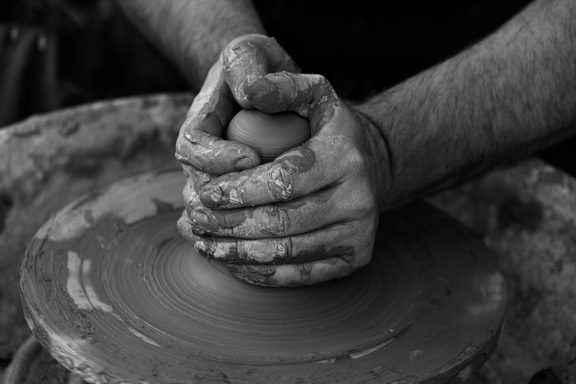 Let us look first at what the church has to teach about honoring our aging parents. It will be seen, as we proceed, that our scope needs to be broader than the parents of the members of our congregation. Some have parents in distant states. Some have aging unmarried relatives. In our midst are childless couples, singles, and divorced persons. The Scriptures indicate that not only parents, to whom we owe honor because of who they are and what position they hold, but indeed all older persons, are to be honored. Think broadly while we note four lessons the church has to teach, and see how these apply to all of us and all of the aging.

First, the church is to teach about the family that God designed, consisting of the father, the mother, and (ordinarily) children. The God-ordained government of the family presupposes that the father is the one responsible to God for the conduct of the family, supported by the mother. The children, for the peace and smooth functioning of the family, as well as for their own development to the glory of God, are to obey their parents. The church should teach these lessons to parents and children alike.

Second, when a child grows up and marries, a new unit is set up. In this unit, the new husband is the head of the family, and the same framework applies as in the first instance. Now a new relationship needs to be established between the married persons and the older generation. The younger couple is still to love their parents and to honor them, but this loving and honoring cannot interfere with the smooth conduct of the new family. The younger couple needs to understand that their first loyalty is to their own little family. And the older couple has to see this also, and not expect obedience or undue consideration from their grown children. The church needs to emphasize this principle in its marriage counseling.

Third, there is a normal direction in which care and concern and teaching are to flow. The parent is to care for and teach his children. The parent is to lay up for his children, not the child for his parents. The prominent concepts of inheritance and heritage in the Old Testament indicate how deeply in Hebrew life was imbedded the idea of laying up for the children. That pattern still holds. The bumper sticker that flaunts, even in jest, that the owners of a vehicle are spending their children’s inheritance, bespeaks a different philosophy.

However, when the parents are in need and the children have the capability, the children are to care for their parents, because to neglect them is to be worse than the heathen. Jesus spoke harshly to some who gave to the church what they should have given to their aging parents (Mark 7:11).

Fourth, the term parent, as we have said, applies in a broader sense to all those in the church family who are aging.

The book of Proverbs abounds in this teaching. “The glory of young men is their strength, gray hair the splendor of the old” (Prov. 20:29). Leviticus 19:32 sets forth a practice that Emily Post endorsed and perhaps her successors still do: “Rise in the presence of the aged, show respect for the elderly and revere your God. I am the Lord.” This translates into giving an older person your seat and letting him or her go first in the line at the church supper, doesn’t it?

EFFECTS ON THE YOUNG

When youth honors age, God is being obeyed, and the person may claim the promise attached to the fifth commandment-that he will live long in the land the Lord his God has given him. If the honor is not there, neither is the promise. In the Scriptures, long life is a symbol of God’s blessing. And in Deuteronomy 5:16, the fifth commandment includes the promise that “it may go well with you.” Life is overflowing with God’s blessing and is full and long when we live all our days mindful of this command.

There is a positive effect upon the lives of young people who honor their elders. They grow up better able to respect authority in general—teachers, police, bosses, the state, the elders of the church. Note that the word elder connotes honor, wisdom and experience. When a person has not been trained to respect the older generation, he finds himself in trouble with authority and will reap the results. His life is characterized by shortsightedness, arrogance and conflict.

Furthermore, if children are taught to honor the older generation, they will have a positive attitude toward aging when it is their turn to experience it. They will be better able to see that God is work ing sanctification in them, whether it seems that way or not, and that they are masterpieces in progress. There is calm. There is hope. They can say with Robert Browning:

Grow old along with me! The best is yet to be, The last of life, for which the first was made…

If younger people fail to honor the aging and fail to hold a positive view of older people in general, they may face a future of ugliness and sorrow, because old age does have its heartaches. As we age, we lose some of our vigor, our hearing, our sight. We are afraid of heights, afraid of the night. So says the preacher. “Remember your Creator in the days of your youth” (Eccl. 12:1).

The Bible is realistic. Youth must I live in moment-by-moment awareness of God. As we age, some of us will not be so good at remembering anything! Honor from younger I people can bring an aura to aging that God’s Word tells us is appropriate.

THE APPROACH OF DEATH

Old age has been called the entryway to death. The church has the key to a sanctuary attitude toward death. In Philippians 1:20–26, Paul speaks of his dilemma: he would like to remain alive so he could serve the church, but he really wants to die, knowing. that that would be far better for him. Again, in 2 Corinthians 4:16–18, Paul says: “We do not lose heart. Though outwardly we are wasting away, yet inwardly we are being renewed day by day. For our light and momentary troubles are achieving for us an eternal glory that far outweighs them all. So we fix our eyes not on what is seen, but on what is unseen. For what is seen is temporary, but what is unseen is eternal.” If we call old age a prelude to death, that prelude is not a dirge, but a triumphal march.

Without Christ, and thus without the beautiful pictures from the Bible of old age being a prelude to eternity with Christ, growing numbers of people today are espousing the mind-set of the Hemlock Society and the promoters of “death with dignity” and “the right to die.” The Christian message to such people is that man, made in the image of God who created him, is to be honored, and that to God alone belongs the prerogative to terminate life in accordance with His own timetable.

The honoring of older people has a positive effect on the church and on society in general. It illuminates life, both individual life and corporate life. It lends unity and purpose. It produces hope. The church, like the individual who trusts in the Lord, will renew its strength. It will soar on wings like an eagle. It will run and not grow weary. It will walk and not be faint (Isa. 40:31).

Mrs. Ellis is the wife of retired minister in the Orthodox Presbyterian Church, Charles H. Ellis.

Reprinted from New Horizons of the Orthodox Presbyterian Church, January 2000.