450 years ago, a request came to John Calvin to write on the character of and need for reform in the Church. The circumstances were quite different from those that inspired other writings of Calvin, and enable us to see other dimensions of his defense of the Reformation. The Emperor Charles V was calling the Diet of the Holy Roman Empire to meet in the city of Speyer in 1544. Martin Bucer, the great reformer of Strassburg, appealed to Calvin to draft a statement of the doctrines of and necessity for the Reformation. The result was remarkable. Theodore Beza, Calvin’s friend and successor in Geneva, called “The Necessity for Reforming the Church” the most powerful work of his time.

Calvin organizes the work into three large sections. The first section is devoted to the evils in the church that required reformation. The second details the particular remedies to those evils adopted by the reformers. The third shows why reform could not be delayed, but rather how the situation demanded “instant amendment.” 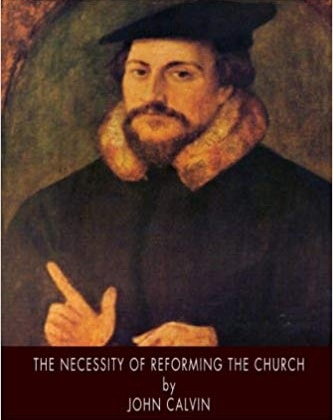 Calvin stresses the importance of worship because human beings so easily worship according to their own wisdom rather than God’s. He insists that worship must be regulated by the Word of God alone “I know how difficult it is to persuade the world that God disapproves of all modes of worship not expressly sanctioned by His Word. The opposite persuasion which cleaves to them, being seated, as it were, in their very bones and marrow, is, that whatever they do has in itself a sufficient sanction, provided it exhibits rome kind of zeal for the honour of God. But since God not only regards as fruitless, but also plainly abominates, whatever we undertake from zeal to His worship, if at variance with His command, what do we gain by a contrary course? The words of God are clear and distinct, ‘Obedience is better than sacrifice.’” This conviction is one of the reasons that reform was required: “… since…God in many passages forbids any new worship unsanctioned by his Word; since he declares that he is grievously offended with the presumption which invents such worship, and threatens it with severe punishment, it is dear that the reformation which we have introduced was demanded by a strong necessity. “By the standard of God’s Word Calvin concludes of the Roman Catholic Church that “the whole form of divine worship in general use in the present day is nothing but mere corruption.”

For Calvin the worship of the medieval church had become “gross idolatry.” The issue of idolatry was for him as serious as the issue of works righteousness in justification. Both represented human wisdom replacing divine revelation. Both represented a pandering to human proclivities, rather than desiring to please and obey God. Calvin insists that no unity can exist in worship with idolaters: “But it will be said, that, though the prophets and apostles dissented from wicked priests in doctrine, they still cultivated communion with them in sacrifices and prayers. I admit they did, provided they were not forced into idolatry. But which of the prophets do we read of as having ever sacrificed in Bethel?”

The reformers, like the prophets of old, needed to attack the idolatry and the “external show” of the worship of their time. The antidote to the theatrics of the church in Calvin’s day was a godly simplicity of worship—as reflected in the order of service in the church of Geneva. Such simplicity encouraged worshipers to give mind as well as body to worship: “For while it is incumbent on true worshipers to give the heart and mind, men are always desirous to invent a mode of serving God of a totally different description, their object being to perform to him certain bodily observances, and keep the mind to themselves.”

Calvin next turns to the subject of justification. Here he grants that disagreements have been the sharpest:

“There is no point which is more keenly contested, none in which our adversaries are more inveterate in their opposition, than that of justification, namely, as to whether we obtain it by faith or by works.” On this doctrine depends “the safety of the Church” and because of errors on this doctrine the church has incurred “a deadly wound” and “been brought to the very brink of destruction.”

Calvin insists that justification is by faith alone: “…we maintain, that of what description soever any mans works may be, he is regarded as righteous before God, simply on the footing of gratuitous mercy; because God, without any respect to works, freely adopts him in Christ, by imputing the righteousness of Christ to him, as if it were his own.”

This doctrine has a profound effect on the life and experience of the Christian: “…by convincing man of his poverty and powerlessness, we train him more effectually to true humility, leading him to renounce all self-confidence, and throw himself entirely upon God; and that, in like manner, we train him more effectually to gratitude, by leading him to ascribe, as in truth he ought, every good thing which he possesses to the kindness of God.

Calvin’s third topic is the sacraments which he examines in detail. He complains that “…ceremonies devised by men were placed in the same rank with the mysteries instituted by Christ” and that the Lord’s Supper in particular had been transformed into a “theatrical exhibition.” Such abuse of God’s sacraments is intolerable. “The first thing we complain of here is, that the people are entertained with showy ceremonies, while not a word is said of their significancy and troth. For there is no use in the sacraments unless the thing which the sign visibly represents is explained in accordance with the Word of God.”

Calvin laments that the simplicity of sacramental doctrine and practice that prevailed in the early church has been lost. This is most clearly seen in the Lord’s Supper. Eucharistic sacrifice, transubstantiation and the worship of the consecrated bread and wine are unbiblical and destroy the real meaning of the sacrament. “While the sacrament ought to have been a means of raising pious minds to heaven, the sacred symbols of the Supper were abused to an entirely different purpose, and men, contented with gazing upon them and worshiping them, never once thought of Christ.” The work of Christ is destroyed, as can be seen in the idea of eucharistic sacrifice, where “…Christ was sacrificed a thousand times a day, as if he had not done enough in once dying for us.”

The true meaning of the Supper is summarized by Calvin simply: “… we exhort all to come with pith…we…preach that the body and blood of Christ are both offered to us by the Lord in the Supper, and received by us. Nor do we thus teach that the bread and wine are symbols, without immediately adding that there is a troth which is conjoined with them, and which they represent.” Christ truly gives Himself and all His saving benefits to those who participate in the Supper by faith.

This brief overview of Calvin’s discussion of the sacraments gives us only a taste of his treatment of this important subject. He devotes considerable attention to baptism as well as refuting the Roman position that there are five additional sacraments.

Finally Calvin turns to the subject of the government of the church. He notes that this is potentially a huge subject: “Were I to go over the faults of ecclesiastical government in detail, I should never have done.” He focuses on the importance of the pastoral office. The privilege and responsibility of teaching is at the heart of this office: “…no man is a true pastor of the church who does not perform the office of teaching.” One of the great accomplishments of the Reformation is the restoration of preaching to its proper place in the life of God’s people. “…none of our churches is seen without the ordinary preaching of the Word.” The pastoral office must link holiness to teaching: “…those who preside in the Church ought to excel others, and shine by the example of a holier life…”

Calvin complains that instead of teaching and pursuing holiness, the leadership in the Roman church exercises “a most cruel tyranny” over the souls of the people of God, claiming powers and authority not given to them by God. The Reformation brought a glorious liberty from unbiblical traditions that had bound the church. “As it was, therefore, our duty to deliver the consciences of the faithful from the undue bondage in which they were held, so I have taught that they are free and unfettered by human laws, and that this freedom, which was purchased by the blood of Christ, cannot be infringed.”

The Roman church made much of its apostolic succession, especially for ordination. Calvin insists that reformed ordination follows the genuine teaching and practice of Christ, the apostles and the ancient church. He observes, “No one, therefore, can lay claim to the right of ordaining, who does not, by purity of doctrine, preserve the unity of the church.”

Calvin concludes this treatise with a reflection on the course of reformation. He attributes the beginning to Luther who with “a gentle hand” called for reform. The response from Rome was an effort “to suppress the troth with violence and cruelty.” This warfare did not surprise Calvin for “…the uniform fate of the gospel from its first commencement, has been, and always will be, even unto the end, to be preached in the world amid great contention.”

Calvin justifies this trouble in the life of the church because of the importance of the issues in dispute. He does not permit any minimizing of the fact that the “whole substance of the Christian religion” is at stake. Since the reformers acted in obedience to the Bible, he rejects any suggestion that they are schismatic: “…the thing necessary to be attended to, first of all, is, to beware of separating the Church from Christ its Head. When I say Christ, I include the doctrine of His gospel, which he sealed with His blood….Let it, therefore, be a fixed point, that a holy unity exists amongst us when, consenting in pure doctrine, “We are united in Christ alone.” It is not the name church that provides unity, but the reality of the true church which abides in the Word of God.

Calvin then turns to the practical question of who could properly lead the cause of reform in the church. He rejects the idea that the pope could lead the church or the reform in the strongest language: “I deny that See to be Apostolical, wherein nought is seen but a shocking apostasy—I deny him to be the vicar of Christ, who, infuriously persecuting the gospel, demonstrates by his conduct that he is Antichrist—I deny him to be the successor of Peter, who is doing his utmost to demolish every edifice that Peter built and I deny him to be the head of the Church, who by his tyranny lacerates and dismembers the Church, after dissevering her from Christ, her true and only Head.” He knows that many call for a universal council to solve the problems of the church, but fears that such a council can never meet and that if it does, it will be controlled by the pope. He suggests that the church should follow the practice of the ancient church and settle the matters at various local or provincial councils. In any case the cause must ultimately be left to God who will grant what blessing He sees fit to all reform efforts: “We are, indeed, desirous, as we ought to be, that our ministry may prove salutary to the world; but to give it this effect belongs to God, not to us.”

W. Robert Godfrey, President and Professor of Church History, Westminster Theological Seminary in Escondido, CA, is a contributing editor to The Outlook.