The city of Heidelberg is one of the most beautiful and charming in the world. Built in the Neckar River valley the city looks across the river to rising hills covered with green. Today the city itself has a very well-preserved Renaissance center dominated by the Holy Ghost Church where Caspar Olevianus preached. The University of Heidelberg where Zacharias Ursinus once taught still is very important to the city. Dominating the city visually is the great castle of the electors of the Palatinate, now partly in ruin, but still a magnificent sight. 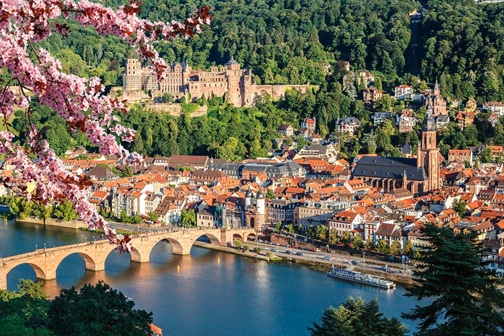 The glories of Heidelberg were not damaged at all during the Second World War. The Germans did not make it a military center, and an American leader who had studied in Heidelberg urged that the city be spared. As a result a visit to Heidelberg allows one to experience something of a sixteenth-century city, an experience that is quite rare in modern Europe.

In the sixteenth century Heidelberg was an important city. It was the capital of a territory called the Palatinate. (In those days Germany was called the Holy Roman Empire. The Emperor had limited powers to control the hundreds of territories that comprised the empire. Each local territory had its own ruler, laws and customs.) The local ruler of the Palatinate was an elector. As elector the most distinguished title a ruler could bear—he was one of seven rulers who voted in the election of a new emperor. The Palatinate was one of the most politically significant territories in the empire.

As the Reformation spread in Germany, it began to have an impact in the Palatinate as well (Philip Melanchthon, Luther’s close associate, was born in the Palatinate.) In 1545, the story goes, so many had been attracted to the Reformation cause that the congregation in the Holy Ghost Church broke out into singing a Reformation song, “Redemption has come to us.” Seeing the sympathy for the Reformation, the Elector Frederick II ordered an end to the mass being celebrated in the city and allowed the city to move more and more into the Protestant orbit. Shortly before his death in 1556 the elector became a Protestant.

The next elector was Otto Henry (1556–1559). Today he is best remembered for making some of the most beautiful architectural additions to the castle. He contributed to religious tensions in the city by appointing Tileman Hesshusius as superintendent of the churches. Hesshusius was a strict Lutheran and soonsharply alien-ated other Protestants (Melanchthonian Lutherans, Zwinglians, Calvinists).

After a brief reign, Otto Henry was succeeded by Frederick m, known to history as Frederick the Pious. Frederick was born in 1515 and raised a devout Roman Catholic. In his early years as elector he became a Protestant through the influence of his wife and the tragic drowning of a son. Frederick came increasingly to a Reformed theological conviction. He dismissed the troublesome Hesshusius and sought some effective Reformed leadership for his territory. In 1561 Olevianus became court preacher – he was only 24 years old. He had become a Protestant while studying in his teen years in France. Later he studied at Geneva and Zurich. He had known the son of the elector and had tried to save him when he drowned.

Frederick also appealed to the great Peter Martyr Vermigli, then at Zurich, to come to Heidelberg to teach. (peter Martyr is not well remembered by the Reformed any more, but in the sixteenth century he was rightly counted a Reformed theologian equal to Calvin and Beza.) Martyr declined the invitation, but recommended Ursinus in his place. Ursinus arrived in Heidelberg in 1561—he was only 26 years old. Ursinus had been born in Breslau in Siiesia in 1534. From 1550–1557 he studied with Melanchthon in Wittenberg and was deeply influenced by Melanchthon. (Luther had died in 1546.) In 1557–1558 Ursinus traveled and met both John Calvin in Geneva and Peter Martyr Vermigli in Zurich. In 1560 he spent some time studying with Martyr who seemed to have helped Ursinus move to a more decidedly Reformed position.

Frederick certainly gathered remarkable young talent to lead the reform of the Palatinate church. He set out to move his church in a more Reformed direction. In 1561 Frederick agreed to what the Reformed called the “purification” of the churches. All crucifixes, pictures, altars, baptismal fonts and organs were removed from the churches that God might be worshiped without the distractions of human contrivances.

The elector also recognized the need of a Catechism for his churches. Many different ones were being used and he wanted greater uniformity of religious instruction for his people. He also wanted to oppose the growing influence in Germany of the strict Lutherans and their doctrine of ubiquity. (Ubiquity is the doctrine that the humanity of Jesus partakes of the divine attribute of omnipresence so that the flesh and blood of Jesus can be in the bread and wine of the Lord’s Supper.) To write his new Catechism for the Palatinate Frederick appointed a committee which included both Ursinus and Olevianus. The recent work of Professor Fred Klooster has shown that it seems most likely that Ursinus was in fact the principal author of the Catechism. Ursinus had a special interest in catechisms, having written two before the Heidelberg Catechism. He also later devoted much of his energy to lecturing on the Catechism in his college teaching. It has also been suggested that Ursinus was a man of melancholy temperament and that the central theme of Christian comfort in the Catechism reflected his own spiritual struggles.

The Heidelberg Catechism followed the tradition of medieval catechisms by focusing on the Apostles’ Creed, the Ten Commandments, and the Lord’s Prayer. But it developed its exposition of these statements in a clear Reformed structure. Its division into sections on sin, salvation and service reflect a Protestant understanding of grace and its particular answers constantly draw the reader to the spiritual importance and relevance of its teaching.

Frederick was not entirely pleased with the Catechism initially. He believed that a strong statement was needed to contrast the Reformed view of the Lord’s Supper with the Roman Catholic view of the mass. So in 1563 a second edition of the Catechism was issued with a new question (question 80) added. The new addition read: “The Lord’s Supper testifies to us that we have a full pardon of all sin by the only sacrifice of Jesus Christ, which he But the mass teaches that the living and the dead have not the pardon of sin through the suffering of Christ, unless Christ is also daily offered for them by the priests. So that the mass at bottom is a denial of the one sacrifice and suffering of Jesus Christ.”

These words were still not strong enough for Frederick and so a third edition of the Catechism was produced in 1563 with the wording of the Catecltism that is now familiar. Question 80 concludes of the mass that it is a “cursed idolatry.”

This eightieth question has been subjected to a great deal of criticism in the twentieth century. Critics charge that it is out of character with the positive spirit of the rest of the Catechism and is unnecessarily severe to the Roman position. Neither of these criticisms is entirely fair. We must remember that to this day the priest at a Roman mass holds up the consecrated bread, declares:

“Behold the Lamb of God which takes away the sins of the world,” and the people are expected to worship the consecrated bread. Our Reformed forebears properly called this idolatry and all idolatry is cursed.

Those responsible for the preparation of the Catechism were attacked severely in their own day and at great risk defended the Catechism. In 1566 some princes attacked Frederick at the imperial Diet of Augsburg insisting that the Catechism taught doctrines that were illegal in the empire. Frederick replied that he upheld the Augsburg Confession and therefore was in conformity with the laws of the empire. He also stated that he would rather die than abandon his Catechism. His position was upheld by the diet.

Others also suffered for the Catechism. When Frederick died in 1576 he was succeeded by his son Lewis. Lewis was a strict Lutheran and began to exile from his territory the Reformed leadership of the church. Olevianus was dismissed early and Ursinus was the last to go in 1578. Ursinus withdrew to the city of Neustadt, under the protection of Prince Casimir. There he spent the last years of his life teaching theology and lecturing on the Catechism. After his death in 1583 his student David Pareus gathered and edited his lectures for publication as Ursinus’ Commentary of the Heidelberg Catechism. This commentary remains an invaluable resource for the study of the Catechism.

Philip Schaff, the great German Reformed church historian, offered high praise for the Heidelberg Catechism when he wrote: “It combines Calvin’s strength and depth without his severity, Melanchthon’s cordiality and warmth without his indecision, Zwingli’s simplicity and dearness without his cool sobriety and aversion to the mystics.” The strengths of the Catechism remain needed by the church today more than ever. In an age that is often opposed to theology, the Heidelberg Catechism is a dear, warm, attractive presentation of the great truths of the Reformation, which are the great truths of the Gospel.

Dr. Godfrey, President and Professor of Church History at Westminster in CA, is a contributing editor of The Outlook.