In September of 1561, Ursinus arrived in Heidelberg. By the spring of 1562, he was doing some preaching and some teaching at Sapience College, a seminary that was set up by the elector to train men as pastors for the Palatinate. This would be the place where Fredrick III would have his theologian work. The calling that Ursinus would fill would be the head of Sapience College, the “The College of Wisdom.”

A Teacher and Schoolmaster

Ursinus worked diligently as a teacher and took his work very seriously. He could do no other. When asked a question by his students, he would not directly answer them. Instead, he would go back to his study and find the best possible answer for the question posed to him by his students, and then answer them the next day. He was meticulous in his work and busy beyond belief. He did not like to be disturbed while in his study. Ursinus had a sign hanging over the door of his study which said, “Friend who enters here, be short or go or help me with my work.”) This best described the theological drive of Ursinus. 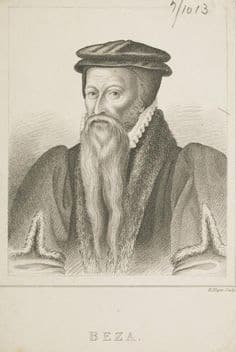 During his years as head of Sapience College, Ursinus was often in ill health. His work was burdensome, and he was over worked. Ursinus would use this to his advantage. Crato, who had become Ursinus’ friend, would often want Ursinus’ opinion on theological matters that were being discussed in court. Ursinus would use his health and his labors as excuses for not answering. Ursinus remembered the polemics of his younger years and did not want to be a part of it. In one letter he wrote Crato, “I am glad God did not place me to deal with those great affairs.”2

One of the few instances where Ursinus hadto be involved in a public theological dispute was at the Maulbronn Colloquy. Fredrick had been called to give an account of the theology ofthe Palatinate by his fellow princes of Germany. The conference took place in April 1564 and lasted for a week. Each side had a number of theologians. The main antagonists were Ursinus and the Gnesio-Lutheran, Jacob Andreae. Andreae became a persistent foe for Ursinus in the years to come. The proceedings were to be private, but the GnesioLutherans published their view of the minutes and further debate and writings would ensue.

Soon after arriving in Heidelberg, Ursinus was called upon with Casper Olevianus, the court preacher for Fredrick III as well as preacher for the Church of the Holy Ghost, to write a document that would be used as a tool to bring the beliefs of the Palatinate together. It would be written especially for the teaching of the children of the region. It would contain the doctrines of what would become a new faith in a world that only had two at the time (Catholic and Lutheran).

Fredrick was looking for a document that could bring unity to the Palatinate and leaned on these two men to do it. What could have been a better choice than these two: an elegant preacher of the Word who was known to move the hearts of men, and a pious, quiet teacher of great understanding.

The writing the catechism took nearly a year to complete. This new catechism was different from many of the documents that were being written at the time. Fredrick had insisted that the writers use proof texts for answers so as to protect the document as Biblical. This document was also very personal; that is, for the believer. It used words like “we” and “I” to describe the faith of the catechumen in relation to God.

After it was complete, Fredrick called ministers and teachers in the Palatinate to study the new document. Several noted that the new catechism reminded them of the book of Romans. The meeting lasted eight days and the document was unanimously approved by the attendees.

In the second edition, Frederick ordered Question and Answer 80 to be added, though without the sharp language concerning the mass; but when the attacks of Roman Catholics increased in bitterness and intensity, Frederick made another change in this same question and answer which included the words which have ever afterward vexed the souls of Roman Catholics, words which branded the mass as “an accursed idolatry.” Frederick also ordered that it be divided into fifty-two sections, or Lord’s Days, so that it could be preached from beginning to end in one year.3

The new catechism was Fredrick’s document, but the theologians would have to defend it.

The Heidelberg Catechism did not remain only in the Palatinate. Fredrick sent copies to the other princes of Germany and abroad. The document that was meant to bring unity for the Palatinate would bring unwanted strife for its chief author. What took him one year to write would need defending for the rest of his life.

The attacks came fast and furious, curiously enough not as much from the Catholics, but from the German Lutherans. Many articles and tracts were written about the catechism.

One of main documents that Ursinus wrote concerning this controversy was True Doctrine of the Sacred Supper of Jesus Christ.

The Lutherans’ errors … derived from insufficient knowledge of the doctrine of the sacraments, from an incorrect reading of the Heidelberg theology, and from too great a reliance on the reputation of men.

Ursinus felt, as Melanchthon did earlier, that people were more concerned about winning the argument than looking for the truth. Ursinus desired that those who opposed the Catechism would look for what Luther would have agreed with instead of focusing on where they thought Luther disagreed.

a. The Lord’s Supper

Religious war was in full bloom in Germany, and it was over the same subject that had been the battle with the Catholics, only with a different twist; the question being how is Christ present at the Lord’s Supper?

A related topic to the presence of Christ at the Lord’s Supper was ubiquity. Where is Christ physically? Olevianus described Andreae’s (a Lutheran) position as, “Christ sits on God’s right. God’s right is everywhere. Thus Christ’s humanity is everywhere.” This tactic was used to get the physical presence of Christ at the Lord’s Supper. Using that same argument, one could say that God’s left is everywhere, and since God puts the unbeliever on His left at judgment day, we all must be unbelievers. The argument by Andrew was shown to be ludicrous and a prime example of why Ursinus did not want any part of the polemics of his day.

Ursinus’ explanation of the matter was, “that Christ’s divine nature is eternal and everywhere, whereas His human nature is finite and local, and once in heaven it remained there.”6 Ursinus also used the doctrine of the Trinity in his Confession as a response to Andreae on both subjects of the Lord’s Supper and Ubiquity.

After the Heidelberg Catechism

The high point of Ursinus’ career was the Heidelberg Catechism. While teaching at Sapience College, Ursinus became the defender of the catechism. This took its toll on one who already had health issues. By 1566, Ursinus’ writing had dramatically decreased. Two years later, he gave up his chair at Sapience College, but continued to teach. Fredrick III asked for Ursinus’ advice on what to do with church discipline and the setting up of presbyteries. Ursinus spoke in favor of each and his argumentation ruled the day. While in Heidelberg in late 1573, he married Margaretha Troutwein. Their marriage would not be long (about nine years). They had one son.

In 1576, Fredrick the Pious died and a change came to the Palatinate. Fredrick’s son, Louis, took his father’s place. Louis was an ardent Lutheran even though he was instructed by his father to let the Reformed faith live on. He did not heed his father and within a year, six hundred positions were taken away from the Reformed and given to Lutheran pastors and teachers.

Ursinus set up a school at Neustadt, Germany. Fredrick’s second son, Casimir, ruled in this territory. In the year of Ursinus’ death (March 6, 1583), Casimir came to rule in the Palatinate when his brother, Louis, died. At that time the Reformed faith was reestablished in the Palatinate.

Within many Reformed traditions, the Heidelberg Catechism is considered the crown jewel of its confession. I have met with many dying saints who spoke of Jesus as their only comfort in life and death. It is a confession that is still preached regularly, even weekly, in some denominations. One wonders if Ursinus realized the impact that this confession would have on the lives of thousands upon thousands of people throughout the following centuries. Certainly, the hand of God was at work using men to develop His church and her doctrines.

Ursinus’ work on the Heidelberg Catechism has stood the test of time. It is a document for the church, but, more importantly, for her people. It is a very personal confession. It is unfortunate that many who have this as part of their church history do not understand the document and what it truly means. Some just see it as antiquated and fail to comprehend the deep truths that are contained within it. Ursinus and Olevainus were used by God to produce a biblical masterpiece for the Reformed faith.