Only the swollen rivers of the Jordan River separated the children of Israel from the Promised Land. After forty years of wandering in the desert, they were ready to cross over into Canaan, only to have their plans frustrated by a flooded river. So near, yet so far.

After they sat on the banks of the Jordan for three days, their new leader Joshua gave them very specific instructions. They were to follow the ark of the covenant. The ark of the covenant represented the very presence of God. It would be Jehovah who would lead and guide them into the Promised Land.

In the next month or two, my family will be moving 1,683 miles. We have lived in Michigan for nineteen years—most of our children were born here. Not only do we leave this state, but we leave the States moving to Alberta, Canada. Wow! I never dreamed that when President Obama promised change, it would be this drastic! The words of Joshua have certainly taken on new meaning for my family.

Those words, however, speak not only to my family; they speak to all of us as we enter a new decade. The path ahead is uncharted. The days hold promise, but there are threats to our peace and well-being behind every page of the calendar. We need to know, just as the Israelites needed to know, that the almighty God goes before us into the New Year. As we anticipate the coming of the new decade, we should pause a moment to see what we need for the journey that is before us.

How many times do we jump into something without first exercising caution? We jump into an argument before we have our facts straight; we blame people for doing things without knowing the circumstances; we move to a new area in the world because of a job offer without first checking if there is a church in the area. We do all kinds of things we should not do because we do not exercise caution and seek guidance from above.

There were probably a few young men on the banks of the Jordan who thought that Joshua was a little overcautious. They were ready to plunge into the turbulent river. The shortsighted would have seen it as a sign of bravery, perhaps even as a sign of faith. After all, if God wanted them to have the land, why not go and get it?

Joshua, however, insisted that they wait a few days. Better delay the great entrance into the Promised Land than enter as a half-drowned nation. A far greater concern for Joshua was that he receive the green light from Jehovah. God had brought them to the banks of the river; He would lead them the rest of the way. 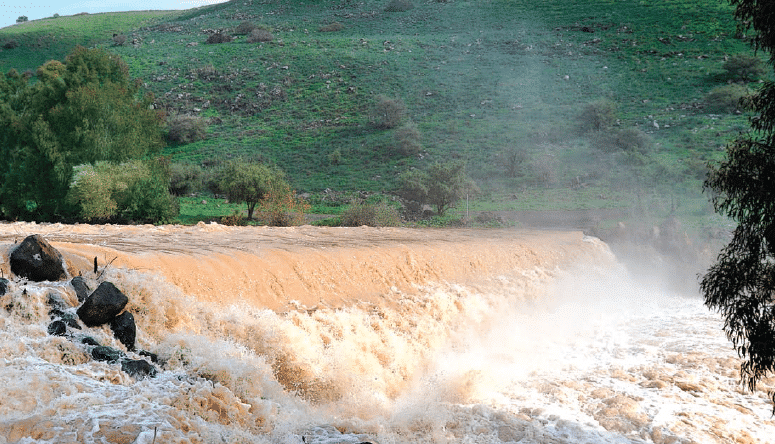 There is wisdom in that for us. We must caution ourselves to accept the guidance of God along the road of life. How many times have you been in a hurry only to discover you have forgotten something once you arrived to your destination? Better to prepare for the journey with God than to start before you are fully prepared. How often our main goal seems to be to save a few minutes here and there only to waste our lives chasing after the things of the world rather than the things of God. Like some overzealous Israelite, we jump into the river with both feet, never waiting for God’s guidance.

The new decade may be unfamiliar to us. There will be storms through which we will pass, and without God’s guidance we could very easily lose the way. For Joshua, it was more than symbolic that the ark of the covenant would go before the Israelites through the Jordan River. He knew Israel could not cross the river, let alone take possession of the land and dwell therein without Jehovah leading the way.

A new decade will bring many challenges. Every day the news seems to become more unbearable as we see natural disasters, governments toppling, multiplied wars, and so on. Not only will there be problems on the global scene, but we shall face many personal challenges as well. No wave of a magic wand will make the difficulties of life disappear. This fact does not automatically give us courage to move forward. True courage can only come when there is a conscious, personal commitment to Jesus Christ and a desire to do the will of God.

That courage was clearly demonstrated by God’s Son, Jesus Christ. Day by day, Jesus was dependent upon the resources provided by the Father as He sought only to do His Father’s will. When placed on trial with little chance of justice, Jesus was calm and silent. When on the cross facing the torment of the race He came to save, Jesus prayed for their forgiveness and won the right to grant that forgiveness through His death.

The disciples of Jesus moved in a world that had no room or use for their Master. They were tortured, persecuted, jailed, and killed. But they were committed to Jesus Christ, and God gave them the courage to proclaim the glorious message of salvation to their persecutors. They sought to serve God rather than men.

Today there are missionaries and Christians across the globe who have given up the comforts of home to face persecution, prison, and death in order to bring the message of the gospel to others. They have within them the quiet courage that is born out of a faith in Jesus Christ as Savior and Lord. That faith has enabled them fearlessly to bear witness for Christ, even in times of turmoil.

We cannot hope to enter a new decade with any safety unless we have a true commitment to Jesus Christ and the courage that comes from confessing Him as the Lord of our lives.

Joshua called the Israelites to advance in faith into an unknown land before them. He did so because he knew God would lead them all the way. It may have looked impossible to cross the wide, deep, flooded Jordan River. But God would do the impossible. He would do great things for Israel.

Joshua’s call echoes through the centuries as we begin this new year. We are called to consecrate ourselves as Israel was called to do before entering the Promised Land. Such a consecration will bring us closer to God each day of the new decade. How much better it will be to face the rivers we will have to cross when we face them with our Savior.

Such consecration to God is essential for all who claim to be members of the church of Jesus Christ. The church must see to it that she is a leader within society and not a follower. We must be bold enough to stand firm in the truth of God’s Word and to proclaim His gospel with fervor and conviction. We can do so only as we are led and strengthened by Jehovah. We can do so trusting that He will lead us as we seek to be faithful to His calling to service and witness.