One of the challenges about being Reformed in America is to figure out the relationship between what is evangelical and what is Reformed. Protestantism in America is dominated by the mainline Protestants, the evangelicals and the charismatics. After these dominant groups, other major players would include the confessional Lutherans. But where do the Reformed fit in, particularly in relation to the evangelicals with whom historically we have been most closely linked?

One area in which the differences between evangelical and Reformed can be examined is in the matter ofworship. At first glance we may seemore similarities than differences. The orders of worship in Reformed and evangelical churches can be almost identical. Certainly both kinds of churches sing songs, read Scripture, pray, preach and administerbaptism and the Lord’s Supper. But do these similarities reflect only formal agreement or do they represent a common understanding of the meaning and function of these liturgical acts in worship?

If we look closely, I believe that we will see the substantive differences between evangelicals and Reformed on worship. That difference is clear in two central issues, first the understanding of the presence a God in the service and second, on the understanding of the ministerial office in worship. The presence of God in worship may seem a strange issue to raise. Do we not both believe that God is present with His people in worship? Indeed we do. But how is God present and how is He active in our worship?

It seems to me that for evangelicals God is present in worship basically to listen. He is not far away; rather He is intimately and lovingly present to observe and hear the worship of His people. He listens to their praise and their prayers. He sees their obedient observation of the sacraments. He hears their testimonies and sharing. He attends to the teaching of His Word, listening to be sure that the teaching is faithful and accurate. 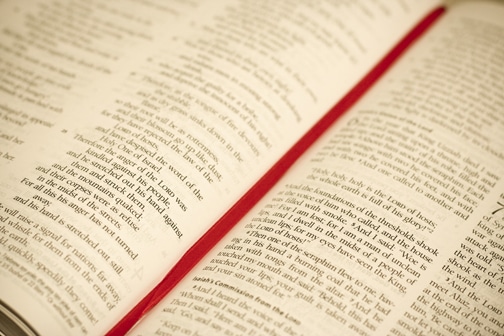 The effect of this sense of evangelical worship is that the stress is on the horizontal dimension of worship. The sense of warm, personal fellowship and participation among believers at worship is crucial. Anything that increases a sense of involvement especially on the level of emotions is likely to be approved. The service must be inspiring and reviving and then God will observe and be pleased.

The Reformed have a fundamentally different understanding of the presence of God. God is indeed present to hear. He listens to the praise and prayers of His people. But He is also present to speak. God is not only present as an observer; He is an active participant. He speaks in the Word and in the sacraments. As Reformed Christians we do not believe that He speaks directly and immediately to us in the church. God uses means to speak. But He speaks truly and really to us through the means that He has appointed for His church. In the ministry of the Word as it is properly read, preached and ministered in salutation and benediction — it is truly God who speaks.

As the Second Helvetic Confession rightly said, “The preaching of the Word of God is the Word of God.” God is also actively present and speaking in the sacraments according to the Reformed understanding. The sacraments are much more about Him than about us. He speaks through them the reality of the presence of Jesus to bless His people and He confirms His Gospel truth and promises through them.

The effect of this understanding of Reformed worship is that the stress is on the vertical dimension of worship. The horizontal dimension is not absent, but the focus is not on warm feelings and sharing. Rather it is on the community as a unit meeting their God. Our primary fellowship with one another is in the unified activities of speaking to God in song and prayer and of listening together as God speaks to us. The vertical orientation of our worship insures that God is the focus of our worship. The first importance of any act of worship is not its value for the inspiration of the people, but its faithfulness to God’s revelation of His will for worship. We must meet with God only in ways that please Him. The awe and joy that is ours in coming into the presence of the living God to hear Him speak is what shapes and energizes our worship service.

The difference between Reformed and evangelicals on the presence of God in worship is closely tied to their differences on ministerial office in worship. For evangelicals the ministers seem to be seen as talented and educated members of the congregation called by God to leadership in planning and teaching. The ministers use their talents to facilitate the worship of the congregation and to instruct the people. The ministers are not seen as speaking distinctively for God or having a special authority from God. Rather their authority resides only in the reliability of their teaching, which would be true for any member of the congregation.

The effect of this evangelical view of office is to create a very democratic character to worship in which the participation of many members of thecongregation in leading the service is a good thing. The more who can share, the better. The many gifts that God has given to members of the congregation should be used for mutual edification. Again the horizontal dimension of worship has prevailed. The Reformed view of ministerial office is quite different. The minister is called by God through the congregation to lead worship by the authority of his office. He is examined and set apart to represent the congregation before God and to represent God before the congregation. In the great dialogue of worship he speaks the Word of God to the people and he speaks the words of the people to God except in those instances when the congregation as a whole raises its voice in unison to God. The Reformed do not embrace this arrangement because we are anti-democratic or because we believe that the minister is the only gifted member of the congregation. We follow this pattern because we believe it is Biblical and the divinely appointed pattern of worship.

The effect of this view of office is to reinforce the sense of meeting with God in a reverent and official way. It also insures that those who lead public worship have been called and authorized for that work by God. The Reformed are rightly suspicious of untrained and unauthorized members of the congregation giving longer or shorter messages to the congregation. In worship we gather to hear God not the opinions of members. The vertical dimension of worship remains central.

The contrast that I have drawn between evangelical and Reformed worship no doubt ought to be nuanced in many ways. I have certainly tried to make my points by painting with a very broad brush. Yet the basic analysis, I believe, is correct. One great difficulty that we Reformed folk have in thinking about worship is that our worship in many places has been accommodated to evangelical ways. If we are to appreciate our Reformed heritage in worship and, equally importantly, if we are to communicate its importance, character and power to others, we must understand the distinctive character of our worship.

Our purpose in making this contrast so pointed is not to demean evangelicals. They are indeed our brothers and our friends. But we do have real differences with them. If Reformed worship is not to become as extinct as the dinosaurs, we as Reformed people must come to a clear understanding of it and an eager commitment to it. In order to do that we must see not just formal similarities, but more importantly see the profound theological differences that distinguish evangelical worship from Reformed worship.

Dr. Godfrey, editor of this department, is Professor of Church History, and President of Westminster Seminary in Escondido, CA.