What do you think of the OPC and URCNA’s proposed Psalter Hymnal? As the URCNA synod faces the final vote on a nearly twenty-year-long project, across our federation it seems as though the jury is still out. Many ministers, musicians, and members are optimistic that a new book will bring new life to singing in the URCNA. Equally forceful are the opinions of others who fear that the project will wreak havoc on the musical heritage of our churches. How can the debate move forward?

I’d like to provide five reasons why I believe the new Psalter Hymnal should receive a favorable vote. Readers may be skeptical of my perspective as a young lay member of the URCNA. They may be even more skeptical when I admit that there are things about the new Psalter Hymnal I don’t like. Nevertheless, I hope the following arguments will adequately explain my position.

It Will Help Our Federation Establish Its Identity

In order to explain this point I need to back up—behind the Psalter Hymnal, behind the Reformed tradition, behind even Christianity—to the fundamental nature of singing.

Music, in general, is an art. But singing is more than art; it is also speech. Do you ever stop to marvel that the human voice can produce both music and words simultaneously—and in such a way as to be understood? Good singing appeals to the ear, communicates rational ideas, and stirs our deepest emotions. As such it is a powerful means of persuasion.

There is another dimension too. Jesus said, “Out of the abundance of the heart [the] mouth speaks” (Luke 6:45 ESV). The words that issue from our mouths, both spoken and sung, reveal who we are and what we value. Do we sing often or rarely? Willingly or hesitantly? Joyfully or indifferently? Do we sing pure words or foul ones? The answers to these questions provide observers—believers and unbelievers alike—with clues about the orientation of our hearts. 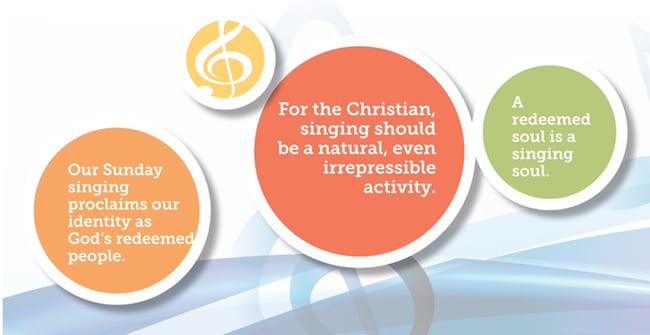 Here is a third observation: Our Sunday singing proclaims our identity as God’s redeemed people. This gains expression as we sing together to glorify God and build up one another. We gather freely and joyfully in His name, eager to praise Him, confess our sins, offer thanksgiving, and present our requests. For the Christian, singing should be a natural, even irrepressible activity. A redeemed soul is a singing soul.

Finally, it is worth noting that congregational singing bears substantial similarities to prayer, Scripture reading, and even preaching, particularly when we sing psalms or other Bible passages. Not only does singing fill its own divinely ordained role in Christian worship, it reinforces other elements of the service as well.

Congregational singing is a rhetorical tool, a window into the human heart, a response to redemption, and a means of glorifying God and edifying the saints. As such it should be an integral part of what defines us as Christians and, more specifically, as the URCNA. The tradition of combining the Psalter Hymnal with the denominational doctrinal standards and liturgy was based on more than practicality. Rather, it testified that what we sing is part and parcel with who we are and what we believe.

It Will Correct Several Problems with the Current Blue Psalter Hymnal

Having grown up with the “old blue,” I make this claim reluctantly. Nevertheless, I can identify at least three significant deficiencies in our de facto songbook.

The psalter section is incomplete. The 1959/1976 blue Psalter Hymnal published by the Christian Reformed Church (CRC) and generally used in the URCNA inherited a tradition of psalm singing that preferred “lite” hymn-like versions of the psalms to denser, more literal renditions. In most cases this merely meant the verses of a psalm were slightly telescoped and sanitized of particularly vehement expressions (see Ps. 88; 137). A more glaring example is the book’s only setting of Psalm 9 (#14), which omits verses 3–8 and 15–20 of the Scripture text, yet adds a refrain strangely reminiscent of a Fanny Crosby hymn. Can this really be called psalm singing?

The hymnal section is inadequate. Granted, the “old blue” includes a decent number of songs, both common and hard to find, that have endeared themselves to multiple generations and are still sung frequently today. But hymns many would call standards, like “Immortal, Invisible, God Only Wise” and “How Great Thou Art,” are conspicuously absent. As to the hymns it does contain, how useful are songs like “Majestic Sweetness Sits Enthroned” and “From Greenland’s Icy Mountains”? Given the limited hymn repertoire of the blue Psalter Hymnal, it should be no surprise that so many United Reformed congregations have purchased or compiled supplemental songbooks.

The language is inaccessible. Let me be clear: I am firmly opposed to altering the original wording of hymns, which is an insult to the poetic efforts of centuries of hymn writers. But when considering psalm settings, I believe it is appropriate to ask whether the lyrics clearly communicate the content of the passage being versified. When the text under consideration is “Ride out in full regalia, and richest panoply” (#82), I believe this is not only a fair question but a necessary one. If our churches have adopted contemporary English translations of the Bible for reading, why are we so reluctant to apply the same principle to singing?

Space does not permit me to demonstrate that the proposed Psalter Hymnal adequately addresses these problems. Nevertheless, I trust that anyone who thoroughly examines the psalm and hymn sections online (available at psalterhymnal.org) will be satisfied with what they find.

It Will Help Our Young Churches

Right now, musical practices across the URCNA are a hodge-podge. Most churches that emerged from the CRC in the 1990s and 2000s sing from the 1959/1976 edition of the Psalter Hymnal, as mentioned above. A few of these have held onto the gray 1987 edition, despite its dubious reputation (even in the CRC). Meanwhile, congregations that join the URCNA from other backgrounds often keep their own particular hymnals.

What are our church plants to do in this situation? Should they save up for the steep cost of purchasing new blue books for their congregations (which means paying for the shortcomings mentioned above)? Do they pursue the ever-shortening supply of used copies in circulation, many of which should have been laid to rest forty years ago (and smell like it, too)? Or do they resort to photocopying psalms and hymns directly into each week’s bulletin, making it impossible for members to familiarize themselves with the songbook they sing from?

Having no Psalter Hymnal of our own is a liability to our whole federation, but the URCNA’s start-up congregations suffer the most. In addition to their frequent geographical isolation from the rest of the federation, these young churches find themselves isolated with respect to their worship as well. I suspect that many of these congregations would willingly save up and sacrifice toward the cost of a new songbook if they knew it would serve them for many years to come and unite them with the rest of the federation.

It Will Put the Motto semper reformanda into Action

I despise the motto semper reformanda (“always reforming”) when it is twisted to justify socially motivated agendas and attacks on the inerrancy of Scripture. In the sense in which it was originally coined, however, semper reformanda means a calling back to God’s Word, along with a return to a biblical model for life, faith, and worship. It means progress, but progress in the direction of Christlikeness.

The new Psalter Hymnal exemplifies this kind of reforming progress. It is no wholesale desertion of the old in favor of the new; the Songbook Committees have made that clear by including such an array of “classic” hymns, many with unaltered language. Nor does it manifest the gender neutralization and politically correct obsessiveness of today’s liberal hymnals. But it is a step forward from the blue book, one that recognizes the full scope of the psalms, incorporates a broad range of Christian hymnody, and takes the role of congregational singing in worship seriously. The process of adapting to a new songbook will be a long and difficult one, for me as much as anyone. But it is a process that will prove whether or not we really mean it when we claim to be “always reforming.”

It Will Proclaim Our Unity as the Body of Christ

One of the most frequent objections to a new Psalter Hymnal is that it will rob older church members of the songs of their youth. It will hinder their worship (so the argument goes) by forcing them to learn different words and music in their old age. I can sympathize with this argument, and with the saints and pillars of the church who raise it. But I would respectfully pose this question: Why do you say the blue Psalter Hymnal is better? Is it because of a conviction embedded in your mind and heart that its psalm settings are more faithful to Scripture and its hymns are a superior expression of praise to God? Or might it be that you love it for its significance to you, for the emotions and memories it conjures up in your own mind?

Hear me out: If the answer is the latter, we will have already lost every battle about church music we could face. If the issue boils down to personal preference, we will have no grounds to argue for or against anything that might go into a new songbook, from J. S. Bach to Chris Tomlin to Lecrae. Church will be nothing more than a group of individuals who happen to like the same things, and if a denominational songbook exists at all, it will exist because (by some miracle) an entire denomination of individuals happen to like the same songs. But why bother? Indeed, why not ditch the hymnal idea and let the pastor pick which songs to print in the bulletin?

“Have it your way” may be the (former) motto of Burger King and the rest of our culture, but it is not—and must not be—the motto of the church. More and more the culture rejects the idea of a common sphere that requires the sacrifice of personal preference. In so doing it creates a world where common causes are impossible.

In direct defiance to this worldview, the church exists as a community of believers united in Christ—believers who deny themselves and look to the interests of others for the sake of the kingdom of Jesus. A Psalter Hymnal is tangible proof that we love each other enough to come to a common agreement about what music glorifies God most and serves the church best, even at the cost of our personal favorites. That is how I can say that I wholeheartedly support this project whether or not I like every song it contains.

What concerns me most, then, is not what I think of the new songbook. It is this: If the United Reformed Churches in North America cannot agree on a Psalter Hymnal, in what sense of the word are we united?

Mr. Michael Kearney is a member of the West Sayville URC on Long Island, NY, and studies communication and music at Geneva College in Beaver Falls, PA. He welcomes your thoughts at mrkearney@optonline.net