Not all our boys have the time or feel the need to join a boys’ organization. Yet normal boyS’ have what is often called the club spirit, or gang spirit. That is, they have an innate desire to associate with likeminded boys and to share pleas­ures and activities.

Recognizing this fact, some of our leaders organized the Boys’ Clubs, whose over-all organization is called the Calvinist Cadet Corps. Knowing something from personal experience about the humble beginnings of this organization—which was called into being at the suggestion of the Minis­ters’ Conference of Grand Rapids and vicinity (Inter Nos)—and having some acquaintance with the many im­provements made by those who spon­sored the Calvinist Cadet Corps, we recommend this organization to our boys who have the desire to belong to a boys’ club.

Leaders of the Boy Scouts have been endeavoring for a number of years to interest the boys of the Christian Reformed Church in joining that organization. In a few instances—very few—our boys have accepted their invitation to organize a troop. Just recently one of our large churches in Grand Rapids did this, in the face of Synod’s decision urging our boys to affiliate with the Calvinist Cadet Corps rather than with the Boy Scouts. The members of the Com­mittee which reported to Synod on the matter were not unanimous in their recommendation but all agreed that the program of the Boy Scouts “is based upon a philosophy evidently that of the modernists” and that it “is basically inadequate and lacks the fundamental elements of Christian­ity.”

One of the reasons the Boy Scouts appeals to some of our boys is that it is a nationwide and popular move­ment. It also offers certain advantages which the Calvinist Cadet Corps may not be able to offer at present. But principle ought to mean something to our boys and their parents. If we the older ones in our churches, had not had parents who were determined to send us to the Christian schools which at that time were pathetically primitive, we would never have succeeded in establishing a system of Christian schools which today can compare favorably with public schools anywhere. Likewise, the fact that the C. C. C. has not yet perfected its pro­gram is no reason why our parents should not insist that their boys should join it rather than the Boy Scouts. 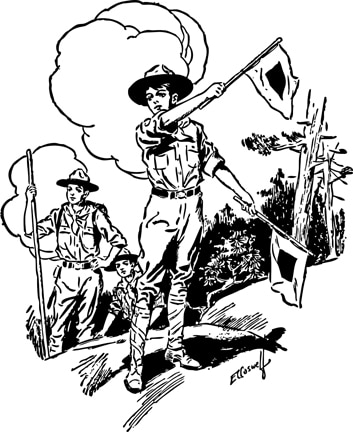 It is true that the Boy Scouts is a rather flexible organization. It per­mits a local church to put its mark on a troop, at least as far as religious teaching is concerned. But the fact remains that the over-all organization also puts its stamp on the movement as a whole and that its spirit of do­ goodism is bound to permeate all the local organizations. Moreover its spirit as well as many of its characteristic features bear close resemblance to those of the lodge.

The late Professor D. H. Krom­minga once wrote an article on the subject of Boy Scouts in the department of The Banner then called “Comments and Correspondence.” His con­tention was that if we let our boys join the Scouts we can no longer con­sistently maintain any of our own organizations for young people.

Boys, join the Boys’ Club in your church or a neighboring church. Par­ents, encourage your boys to join.