America is not an honor society. Nor do we prioritize respect. Rather, disrespect is the norm. It is common for us to treat our elders as our equals (or inferiors). The model TV child is often one who disrespects and belittles his parents. We malign and mock our governing authorities. Employees slander their bosses. Husbands publicly insult their wives and wives ridicule their husbands. In short, we treat others as inferior and less valuable than ourselves. 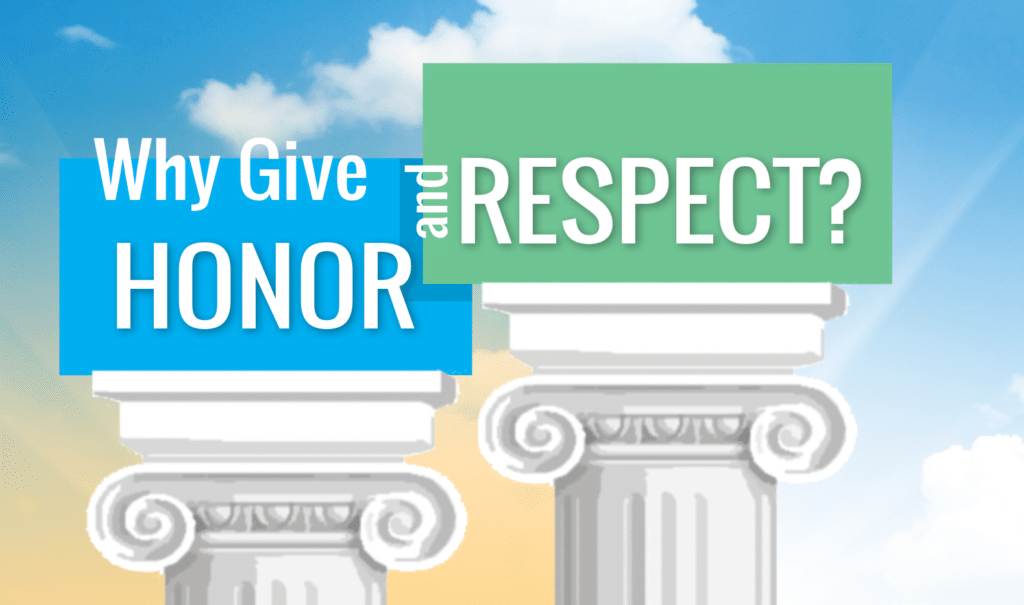 Rather than give honor and respect, we demand it from others. Peter preaches a very different message. Peter charges the church to make honor and respect a priority. Throughout 1 Peter he drives home his point. “Honor everyone. Love the brotherhood. Fear God. Honor the emperor” (2:17, English Standard Version; see also Rom. 12:10). “Husbands, live with your wives in an understanding way, showing honor to the woman as the weaker vessel, since they are heirs with you of the grace of life, so that your prayers may not be hindered” (3:7). “[I]n your hearts honor Christ the Lord as holy, always being prepared to make a defense to anyone who asks you for a reason for the hope that is in you; yet do it with gentleness and respect” (3:15).

He even tells us to give honor and respect to people who give us the opposite. “Likewise, wives, be subject to your own husbands, so that even if some do not obey the word, they may be won without a word by the conduct of their wives, when they see your respectful and pure conduct” (3:1–2; see also Eph. 5:33). “Servants, be subject to your masters with all respect, not only to the good and gentle but also to the unjust” (2:18; see also 1 Tim. 6:1). “Keep your conduct among the Gentiles honorable, so that when they speak against you as evildoers, they may see your good deeds and glorify God on the day of visitation” (2:12). We quickly retort that if we have that mentality, we will become doormats. Nevertheless, Peter calls us to it and justifies his command by pointing us to our ultimate example: Jesus (2:4, 7, 21–23).

This concept of honor and respect is not unique to Peter’s epistle. We find commands to do both throughout the Bible (as indicated by the cross references above). A few more examples: honor your father and mother (Ex. 20:12), honor worthy widows (1 Tim. 5:3), honor the lamb who was slain (Rev. 5:12–13). So, it is safe to conclude that honor and respect are important aspects of the Christian life. Knowing this leaves us with several questions: What is honor, and what is respect? Why does God command us to practice both? And why are they so important?

Though there are several definitions of honor, the most helpful I have found is one taken from Table Talk magazine. It reads, “to honor means to esteem and treat another with respect because of who they are or what they have done.”1 To respect means “to view or consider with some degree of reverence [i.e., deference, esteem]; to esteem as possessed of real worth” (Webster’s 1828 Dictionary). Though similar, there is arguably a slight difference between the two. Respect is owed to those in positions of authority, while honor is owed to all (though also given to those in positions of authority). In any event, we are respect and honor someone because of who they are.

We are all image bearers of God (Gen. 1:26–27). This means that we all possess real worth because God has put his own image in us. As one author wrote, “All human beings are made in God’s image and are worthy of honor. As the psalmist writes, God has crowned humanity ‘with glory and honor’” (Ps. 8:5).2 Therefore, Peter is justified in calling us to honor all. Every person’s identity is, at core, an image bearer of God. So every person deserves honor. However, we are also to give special honor and respect to certain people because of who they are in relationship to us.

God is above (and separate from) all created thing (Ps. 97:9; Eph. 4:6). As the creator and highest authority, he has the right to structure his world as he pleases. It pleased him to reflect his own nature by building structures of authority into the world. God placed all of mankind in a position of authority over the earth and animals (Gen. 1:26). God also placed some people in positions of authority over others (e.g., rulers, church leaders, masters, husbands; see above). God didn’t give these people authority because of anything particularly remarkable or even admirable about them. He gave them authority to display his own glory through them (consider, for example, Pharaoh or Cyrus [Ex. 9:16; Isa. 44:8]). As such, we are to submit to those in positions of authority with respect and honor because their authority comes from God.

We can see then that giving honor and respect are not negotiable. The question we must now answer is, what does this look like in our context? The Westminster Confession offers a helpful summary:

[T]he Larger Catechism unfolds the meaning of honor as paying what is due to them—to superiors, reverence, prayer, obedience, imitation of their godly virtues, maintenance of their dignity, and bearing with their infirmities (WLC 127); to inferiors, love, prayer, instruction, rewards, correction, and protection (WLC 129); and to equals, recognition of their dignity, deference, and rejoicing in their advancement (WLC 131).3

In other words, if someone is in a position of authority over us (husbands over wives, bosses over employees, governors over governed) it is the duty of the inferior to show honor by obeying, praying for, and upholding the reputation of their superiors,4 while the superior shows honor to his inferior by seeking his well-being. For example, an employee ought to do—and do cheerfully—what his boss says (Eph. 6:5–8). Likewise, the boss ought to pray for, instruct, correct, and protect his employees instead of using his authority to intimidate or manipulate (Eph. 6:9). Finally, the employee ought to treat his fellow employees with courtesy and rejoice with them in their successes at work. In short, in every instance, we are to treat others as more important than ourselves (Phil. 2:3). And this, regardless of whether the recipient fulfills her duty to honor us.

It is vital that we follow God’s instruction here for two reasons. First, to do otherwise is an act of rebellion against God himself. As one author wrote, “To fail to honor those around us, whether superiors, inferiors, or equals, is to engage in rebellion against God. Especially in the case of our superiors, casting off earthly authorities is tantamount to casting off our heavenly authority, the One who placed those earthly authorities over us.”5

Second, how we treat one another in the church binds us together and sends a message to the watching world. The church Peter was addressing faced ridicule, dishonor, and persecution from those outside of the church. Therefore, it was vital for them to cultivate a culture of honor within the group. This would allow the Christians to derive their security and worth in God and God’s people, even when the broader culture rejected them.6 It also testified to those watching that Christianity is indeed honorable.7 Though we may not face the same kinds of alienation today, we are still often tempted to desire the fleeting honor our culture awards. (Or to return shame with shame, disrespect with disrespect.) The church that is marked by mutual honor and respect for our superiors counteracts that desire by pointing us to Christ and eternity.

Earlier I mentioned that Peter commands we show honor and respect despite ridicule, shame, or persecution because Jesus did (2:21). He is our highest example. Yet, Jesus’ shame and eventual death accomplished more than making him a good example. “He himself bore our sins in his body on the tree, that we might die to sin and live to righteousness. By his wounds you have been healed” (2:24). Jesus’ death and resurrection purchased our salvation, for his perfect life and propitiatory death are credited to us. We, as it were, died with him. Even so, we have risen with him (see Rom. 6:4; Col. 2:12). Still more, our dishonor (like his) is transformed into eternal honor (1 Peter 2:6–7).

Knowing this gives us not only a reason to show honor and give respect, but also the motivation. We were once those who shamed and ridiculed Jesus. In turn, he rescued us out of death and clothed us with honor. In grateful praise we join the heavenly chorus saying, “Worthy is the Lamb who was slain, to receive power and wealth and wisdom and might and honor and glory and blessing!” (Rev. 5:12). Our hearts overflow with gratitude and a desire for others to know this astonishing love. So, we delight to honor even those who shame us, and joyfully respect our weakest leaders.

4 “Superior” and “inferior” carry negative connotations today. However, these words in no way imply a difference in worth, dignity, or value.

Mrs. Elisabeth Bloechl a member of Orthodox Presbyterian Church Hammond, is a house cleaner and aspiring writer in Griffith, IN.

Mrs. Elisabeth Bloechl Why Give Honor and Respect?