In response to the invitation given by God. through the apostle Paul to “Sing and make music in your heart to the Lord…” (Eph. 5:19b), the Christian church has set the Psalms to music and developed a hymnody known and loved around the world. 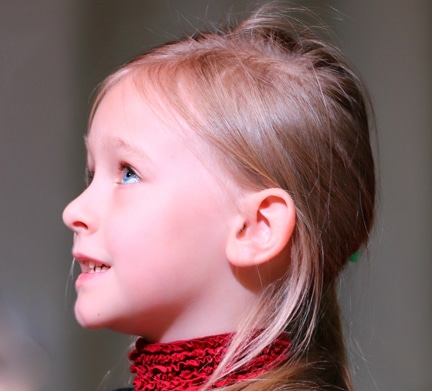 For the next few months, we will be taking a close look at the “music-making” of the church—particularly its singing. We begin by asking the question, why do we sing? The answer can be found in 1) God’s will and activity and 2) man’s response.

GOD’S WILL AND ACTS

There is no area of human existence, experience or endeavor which can or should thrive apart from the control of our sovereign God. Our song is no exception. The Bible makes it very clear that our song is rooted in the will and activity of God Himself.

In Psalm 149, the church is commanded to sing. “Praise the Lord. Sing to the Lord a new song, his praise in the assembly of the saints” (Psalm 149:1).

In Psalm 150, everything that “has breath” must sing, using instruments at its disposal to the glory of God. Certainly this would seem to indicate that something more than just the human voice can legitimately be used in worship. If we have problems with instruments in worship today, perhaps the problem lies not so much with the instruments, but with the use made of these instruments; and with that we will deal in a later article.

Second, we sing because God deserves it. It goes without saying, that had God created man and left him alone, man would still owe God. a debt of praise. But in the trio of Psalms 145, 146 and 147 we have a record of all the gracious acts of God toward man for which He deserves to be praised out of His creatures’ profound gratitude for all God has done. Psalms 145–147 describe God as “gracious, compassionate…slow to anger…rich in love…great…upholding those that fall…lifting up those who are bowed down…giving food at the proper time…righteous…near to all who call upon Him…preserver…destroyer of the wicked…keeper of the truth…relieving the fatherless and the widow…gathering the outcasts…healing the broken hearted…binding their wounds…giving food to the cattle and young ravens…blessing your children within you…making peace in your borders…filling with wheat….” Does anyone dare to withhold the praise He asks? “Sing to the Lord with thanksgiving; make music to our God on the harp” (Ps. 147:7).

Third, we sing because God gives this gift of song. Psalm 40:3 says, “And he put a new song in my mouth.” There can be no songs of human origin which can parallel, far less exceed the psalms in their portrait of God—a God with “a Creator’s mastery over the universe, with a Father’s tender pity toward His children, with a Judge’s interest in righteousness, with a Shepherd’s care for the erring; a God whose glory is above the heavens, who counts the stars and names them, whose kingdom rules over all, yet whose mercy is from everlasting to everlasting. To learn of such a God is to have awakened within the heart a response of penitence, of gratitude, of reverence and of adoring love” (J.A. Lamb in The Psalms in Christian Worship). How regrettable that the psalms set to music have found so little entrance into the English speaking congregations of today, even those of Reformed and Presbyterian heritage who are direct descendants of reformers renown for their reintroduction of the psalms into the lives of the laity at the time of the reformation. Such neglect is a sad commentary on the past; a serious challenge for the future.

But we sing not only because of God’s will and activity, but also as a Spirit-guided expression of our response to that activity.

We sing first because we are redeemed. Proverbs 29:6 says, “A righteous man can sing and be glad.” Perhaps the reason some people do not enjoy singing the “songs of Zion” is because they have no real assurance of sin forgiven and no determination to live a life totally under the kingship of Jesus Christ. God has stem words for those singers whose hearts have grown cold: “Away with the noise of your songs. I will not listen to the music of your harps. But let justice roll on like a river, righteousness like a never-failing stream” (Amos 5:23 and 24). In Ephesians 5:18–19 Paul describes God-glorifying singing as that which comes from those who are “filled with the Spirit.”

Second, we sing because we are thankful for salvation, joyful because of it and committed to sharing it. “But you are a chosen people, a royal priesthood, a holy nation, a people belonging to God, that you may declare the praises of him who called you out of darkness into his wonderful light” (I Peter 2:9).

Third, we sing because by God’s grace we are victorious over the trials and temptations of life. There are many passages in Scripture which refer to “songs in the night” given by God to the troubled soul as comfort and assurance of victory. One such setting is Psalm 42:7b and 8: “All your waves and breakers have swept over me. By day the Lord directs his love, at night his song is with me, a prayer to the God of my life.”

Fourth, we sing because we are a part of the body of Christ and as such we are summoned to corporate worship. We are members of a family. The more we praise God together, the more we realize that unity among brothers and sisters for which Christ prayed. “Speak to one another with psalms, hymns and spiritual songs” (Eph. 5:19a).

Fifth, we sing because we want to testify to the rest of the church and to the world concerning the truth of God in Jesus Christ. Song is an effective teacher of doctrine while being at the same time a vehicle of praise. “My tongue will sing of your righteousness” (Ps. 51:14b); “Sing to the glory of his name” (Ps. 66:2); “I will sing of your love and justice” (Ps. 101:1); “He put a new song in my mouth, a hymn of praise to our God. Many will see and fear and put their trust in the Lord” (Ps. 40:3).

Are we really singing Christians? The question does not concern the quality of our voice. Even “joyful noise” pleases the Lord if the heart is right. But is our praise really rooted in the gracious activity of God and expressed thankfully and joyfully in song? A perpetually sad Christian is a contradiction in terms. Let’s follow Paul’s urging and “make music in our hearts to the Lord.” “I will sing with my spirit but I will also sing with my mind” (I Cor. 14:15b).

And what of heaven? “Then I looked, and there before me was the Lamb, standing on Mount Zion, and with him 144,000 who had his name and his Father’s name written on their foreheads. And I heard a sound from heaven like the roar of rushing waters and like a loud peal of thunder. The sound I heard was like that of harpists playing their harps. And they sang a new song before the throne and before the four living creatures and the elders. No one could learn the song except the 144,000 who had been redeemed from the earth” (Rev. 14:1–3).

Are you redeemed? Then “Let the redeemed of the Lord say so!”